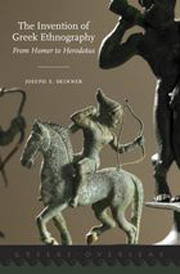 This volume is not simply a survey of ethnographic expressions within Greek sources; it rather sets out to define, locate and pinpoint the beginnings of Greek self-conscious attitude towards foreign peoples. Its main centre of gravity is the challenge on the long-standing modern model of a 5th century BCE epiphany of "ethnography" in a reaction to unprecedented levels of contact between Greeks and non-Greeks.

According to the generally accepted recent model, the threat of invasion by the Persians created an historical encounter of the Greek world with the Barbarian world and aroused the Greek need to engage with definitions of self-identity. As a result, "ethnography", in its meaning as a modern disciplinary category, was born. Skinner does not accept this interpretation and goes earlier, wider and deeper in order to try and define the first Greek expressions of "thinking about culture from the point of view of an outsider" (245). Instead of a 5th century "big bang" phenomenon, Skinner suggests, one should rather perceive "an ongoing continuum, shifting in tempo and focus" (243). Moreover, he insists that the confrontation with the Persian invaders did not give birth to a new mode of thought, because the Greeks encountered other people long before that and, more importantly, expressed their own identity in front of Others in various pre-prose modes.

According to Skinner's new model, references in the Homeric epics and in the work of Hecataeus of Miletus are interpreted not merely as accidental or sporadic allusions to geography and ethnography as a prelude to Herodotus. But, such Archaic expressions of ethnographic tones are treated as the first and earliest beginnings of Greek thoughts of foreigners while the continuities between them and Herodotus are emphasized. Herodotus, then, is less a break from established tradition than has been accepted until recently and the ancient historian does not mark a beginning but a continuation of a process which started before him.

It is, however, admits Skinner, reasonable to assume that the Greek encounter with the Persian invaders did produce a new situation or, perhaps, a slightly different phase in Greek ethnographic thought. Thus, Skinner explains that what happened in the 5th century was the emergence and subsequent circulation of stand-alone treatises devoted to a single land or people. The first ideas of self-awareness emerged already in the Archaic Age and the first neat and coherent expression of these ideas - in the 5th century. The change was therefore simply a matter of another mode of expression.

Skinner dismisses another issue related in modern discussion to the old model of a supposed 5th century Herodotean invention of ethnography. This is the issue of the platform on which ethnographic ideas were delivered. Accordingly, he claims that the invention of writing and the invention of prose did not necessarily mark a change also in modes of thought. These existed earlier than their written expressions in a defined genre of historiographical prose. The invention of prose simply marked an abrupt shift in register in the wider ethnographic discourse.

Another distracting modern tendency is, to Skinner's mind, the Athenocentric approach which put too much emphasis on Athenian sources and concepts and attributed too much to Athenian democracy as an explanation of intellectual and literary trends.

So when and why was ethnography invented? Skinner admits that there is not enough evidence to be able to fix the invention of Greek ethnography to a particular point in time and space but at the same time supplies a convincing and stimulating survey of Archaic ethnography apparent in various sources. Asserting that earlier signs of interest in foreign manners and customs have been downplayed by classicists and historians as unsystematic and lacking in focus as a result, Skinner throws a large and dense cast net. His broad approach encompasses poems, proverbs and other stray references but also material evidence such as coins, vase paintings, reliefs and sculpture. He concludes that the fragmentary collections of these literary references and visual allusions indicate that knowledge relating to a variety of foreign peoples was far more widespread than has been suggested up until now even if very different than the idea of an elevated, rational or scientific discourse.

Skinner constructs his discussion as follows:

In chapter 1 he defines the problem at stake and addresses the goals of his book. In doing so he convincingly places the specific theme within the discussion of broader issues such as approaches to identity and ethnography and identity.

Chapter 2 offers a general survey of knowledge relating to a variety of foreign peoples as it appears in sources representing the years prior to the Persian Wars. It aims at highlighting the breadth and diversity of knowledge of Others including the Cyclopes, the Phaeceans, the Hyperboreans, the Arimaspians, the Scythians, the Amazons, the Thracians, the Phoenicians, the Lydians, the Ethiopians, the Egyptians and the Pelasgians.

On the basis of the discussion in chapter 2, Skinner explores in chapter 3 the various means by which information relating to foreign lands and peoples was organized, structured and disseminated. This examination specifically focuses on early and simple systems of knowledge and understanding which were devoid of epistemic distinctions typical to rational and objective prose. Thus, the findings accumulate into several early conventions such as epithets, stereotypes, lists, foundation stories, praise poetry, coins and artifacts.

Chapter 4 analyzes the extent to which Greek identities were a product of a dialectical interplay of representational strategies, via a series of case studies, such as the treatment of Olbia, Calabria, Delphi and Olympia. In it Skinner aspires to demonstrate that the discursive elements of Greek ethnography were constitutive of identity.

Chapter 5 takes the findings and explorations which were offered and discussed in the previous chapter, ties them together and uses them as a basis for the discussion of the circumstances surrounding the emergence and subsequent circulation of stand-alone treatises devoted to a single land or people, and within them the work of Herodotus.

To sum up, Skinner's thorough and very learned volume offers a fresh and original contribution both by his choice of emphases and by his treatment of the evidence. First, he gazes at the Greek world predating the Persian Wars and concentrates on the earliest traces of "ethnography". Second, he demonstrates a very broad overview across genres. Third, he offers a precise, in-depth and yet multi-angular analysis of ethnography by applying other disciplinary concepts and paradigms such as networking.