Jason Crowley: The Psychology of the Athenian Hoplite 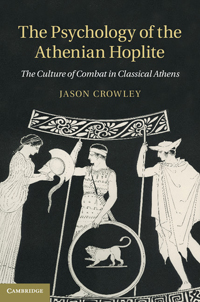 Since the mid 1990's, a new branch of study has emerged within Ancient Greek military history which endeavours to merge modern psychological understanding with historical context and credibility. Since Jonathan Shay [1] introduced the notion of combat trauma to the discipline, using the works of Homer to try to help modern soldiers with the difficulties they found themselves facing, it has become necessary for any book on Greek warfare to include a token chapter on the experience of war. Crowley's work falls into this category of study; however, he is unique in his attempts to explain the motivations behind a 'normal' Athenian's will to fight. Using sociological theory regarding the importance of the primary group, Crowley breaks down the principal factors that influenced a hoplite's decision to fight.

In his introduction, Crowley highlights the military prowess and performance of Classical Athens, focusing in and around the Peloponnesian Wars, whilst, at the same time, plainly demonstrating the gap in the literature which his book intends to fill: that is, a full exploration of possible causes for the amateur Athenians' psychological capacity for battle. Crowley then explains the sources he uses which, as the book title implies, focus solely on Athens. This means he is forced to omit other sources of great importance, such as Xenophon's Anabasis which is understandable, if a little frustrating; especially as much of his analysis could very easily have benefited from using this source. Nevertheless, his attempt to narrow the topic to allow for a more thorough examination is laudable. He also introduces a number of present-day sociological theories which seek to explain modern combat motivations. Theories which he intends to utilise later in the book.

Chapter 1 explores the modern sociological theory of combat motivation; isolating four major factors which will form the core of Crowley's research. Beginning with primary group theory, he shows the importance of the primary group and that the relationships formed within these small groups supersede most other factors and influences on the individual. Widening the net of influence, Crowley then briefly presents the role of the military unit on an individual's motivations, moving swiftly on to the larger questions of socio-political systems and the, ideologically interesting, issue of the compliance relationship.

The second chapter looks at the recruitment, mobilisation and deployment of the hoplites. His section on recruitment utilises the view put forward by van Wees that the Athenian hoplite was not simply the remit of the 'middling class'. Crowley succinctly demonstrates that there was a desire for citizens to serve as hoplites (an idea he expands on in chapter 5). Crowley's section on mobilisation focuses on the katalogos; how it may have worked and who was responsible for various parts of it. He concludes that this system, which Athens most commonly used, may have had its faults; a lack of speed, for instance: nevertheless, it did result in a strong, handpicked force which was superior to the other option of levée en masse. The chapter ends in a synoptic discussion about deployment which focuses on military subdivisions, centred round the debate regarding the size of lochoi.

Chapters 3-6 are Crowley's attempt to use the model he adapted in chapter one within the Classical Athenian context, formatted in the order of influence his model places them in. In chapter 3 he identifies the deme as the most likely primary group; showing how it acted with a semi-autonomy, creating a micro culture which would have been maintained from civic life, as they joined up for military action together (as shown in chapter 2), fought together and then returned home together. Within this chapter Crowley also engages in the debate surrounding the nature of phalanx warfare, dismissing the revisionist presentations of van Wees; preferring the more traditional views expounded by V.D. Hanson, with minor alterations.

Chapter 4 is a small chapter (10 pages) which looks at the argument put forward by V.D. Hanson that the Ancient Greek unit was similar, if not the same, in terms of influence and motivation, to the modern military regiment. Identifying the tribal taxeis as the main candidate for Hanson's theory, Crowley sets out this chapter in a simple format of 'arguments for', 'arguments against' and 'conclusion'. He concludes this chapter by disagreeing with Hanson almost unequivocally, and further observes that the military unit was unlikely to be a motivating factor in a hoplite's will to fight.

Chapter 5 looks at the socio-political system of Athens, focusing on ideologies and commonly held beliefs. The broad nature of this topic does lend for this chapter to appear vague and idealistic, but the model he formulates on these ideals is just as interesting as the micro-culture of the demes that he described in chapter 3. What Crowley achieves in this chapter is that, by using a wide array of sources including drama, law, religion, as well as the historians and philosophers, he presents a strong picture of what an Athenian was supposed to think about war, manhood and being a hoplite. Crowley also argues that these views were held by all Athenians, which would mean that social reintegration was not necessary for returning soldiers. [2]

Chapter 6 examines the three forms of compliance relationships that complete Crowley's overarching model. Crowley examines how each version of the relationship may be made to fit within the context of Classical Athens before settling upon the moral-normative relationship as the most relevant incarnation. The hypothesis is that the Athenian hoplites were not fighting because they were forced to (alienative-coercive) or because they were paid to (calculative-remunerative), but because they believed in the underlying ethos of Athens and respected the legitimacy of their leaders. Although predictable in his conclusions, Crowley does attempt to present the other two forms as possible compliance relationships. It is within this section that the narrow focus of his work prevents an interesting development of his theory. For instance, it would have been interesting to see Crowley use these three models to explore the changing compliance relationships described in Xenophon's Anabasis; showing, the changes in circumstance that occurred and how that affected the motivating factors of the mercenaries.

Crowley concludes that his model has been shown to work and that all of the different aspects he examined came together to produce an Athenian amateur that was morally, socially and ideologically willing to go to war without hesitation, and to kill and fight and consider this a good and positive thing.

Crowley presents an interesting work that tries to elucidate a very difficult and elusive area of ancient Greek military history. Crowley does not look at what happened or how, preferring to stay solely with the question of why? His modern model may not be to all academic tastes, and his blind pursuit of a social ideal rather than following the incongruences of human behaviour seen in the sources must be seen as a gap that definitely requires filling. That being said, his work succeeds in shedding light on that social ideal and unquestionably opens a debate about the motivations of the people who were fighting. This book will become a must read for students of the Ancient Greek 'face of battle', joining a small but growing list of works.