E. M. Rose: The Murder of William of Norwich. The Origins of the Blood Libel in Medieval Europe, New York: Oxford University Press 2015 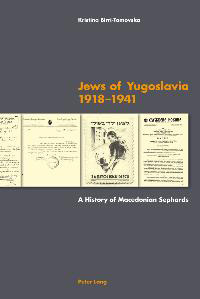 There are relatively few monographs on the history of Jews in what today is the Republic of Macedonia, and Kristina Birri-Tomovska's recent contribution to this literature, Jews of Yugoslavia, 1918-1941: A History of Macedonian Sephards, promises to be an important source of information on this topic. The author states that she is mainly interested in "the manner in which Jews and other minorities experienced political and structural changes and reacted to the new possibilities presented by the new minority policies enacted after WWI" (16). Specifically, in the Yugoslav context, she wants to trace the ways in which Macedonian Sephardim experienced, in the roughly two decades of the interwar period, the transition from Ottoman imperial order to Yugoslav citizenship.

The book begins with a general introduction to the history of Sephardi Jews, with a special overview of history, culture, and customs of Ottoman Jews. It then moves on to the historical context of Balkan wars and World War I, and the international legal system that emerged in its aftermath, with a focus on the system of minority protection. The next chapter provides a social, institutional, cultural, and political snapshot of the new Yugoslav Jewish community in the new post-World-War-I Yugoslav state. The book then moves on to its shortest chapter, and the discussion of questions of acculturation and integration of Yugoslav Jews. The next chapter - the longest one - is entitled "Macedonian Sephards", and examines the history of Jews in Yugoslav Macedonia in the interwar period. The final chapter recounts the rising tide of official antisemitism in Yugoslavia on the eve of World War II, but mostly focuses on the history of the subsequent Bulgarian occupation of Macedonia and deportation of Macedonian Jews to their deaths in Treblinka.

The book's thesis is dispersed among the many historical threads that Birri-Tomovska is pursuing. The author's examination of different topics and issues facing Macedonian and wider Yugoslav Jewish community in the interwar period points to the conclusion that in the aftermath of Balkan wars and World War I, in the new, multiethnic Yugoslav kingdom, Sephardim and Ashkenazim in Yugoslavia created a community, and that this project was facilitated by Yugoslav legislation, as well as Zionist and other Jewish national institutions and efforts. When it comes to the Jews of Macedonia, they, in the words of the author, "found their own formula for survival, through certain integration on one side and holding strong to their traditions, on the other" (290).

This understated summary conceals the remarkable archival and cultural materials that serve as building blocks of the longest chapter of Birri-Tomovska's book. In this strongest part of the book, the author examines the rich histories of the Jewish communities of Skopje, Bitola, and Štip, and sketches the particular local dynamics that had shaped their outlooks. This part of the book delivers the promise from the introduction: the author firmly places the history of Macedonian Jewish communities in the context of its "south Serbian" status within interwar Yugoslavia, and probes the questions of new institutional networks, acculturation, Zionism, and emigration. In so doing, Birri-Tomovska offers a rich social and cultural history of the three main Jewish communities, in a way useful for a general reader as well as an advanced researcher.

Though other parts of the book relate to this centerpiece, there are certain structural tensions and problems of focus. Birri-Tomovska's book is a published dissertation, and it is perhaps in the nature of dissertation writing to develop parts that eventually become obsolete in tightened book manuscripts. The book title itself hints at the main problem: it juxtaposes "Jews of Yugoslavia" of the title to "Macedonian Sephards" of the subtitle. The book, however, is really about Macedonian Sephardim; it is thus the latter that should be in the title, all the more so since Harriet Freidenreich's work of thirty-four years ago - a comprehensive social history of Yugoslav Jews in the interwar period - bears the same title as Birri-Tomovska's book, and is still the standard work on Yugoslav Jewry. [1] Of course, Jews in Yugoslav Macedonia in the interwar period were an important part of the new Yugoslav Jewish community; Zionist circles in Zagreb, for example, considered "modernizing" Jews in the "south" a linchpin of a successful Yugoslav Zionist project. The author hints at these debates, but a book of this title should give much more space to political and cultural discussions that shaped Yugoslav Jewry in the interwar period.

The question of forging a politically unified and culturally diverse community of Yugoslav Jews preceded the creation of Yugoslavia, and remained on the agenda throughout the interwar period. But the Sephardi challenge to this agenda was by no means limited to Macedonian Sephardim: its main political battles were in fact waged in Sarajevo and Zagreb. Although these battles were concerned directly with the forging, culturally and institutionally, of Yugoslav Jewishness - precisely the kind of a "new possibility" which the author professes to study - the reader will learn very little about them in this book.

In a similar manner, certain other parts of the book are only tentatively connected to what ultimately is its main focus, i.e., the Jews of Macedonia. If the regime of minority protection after World War I, the Macedonian question, or the history of establishment and politics of Serbian administration in Macedonia after the Balkan wars, are indeed topics relevant to the discussion of a history of Sephardim in Macedonia - some or all of which, depending on the author's focus, doubtlessly should be - the author does not completely succeed in showing the reader how they are so. Rather, she is content to review these, as well as several other similarly potentially relevant histories, and leave the reader wonder how exactly they relate more directly to the topic at hand. The notable exception is the question of new Yugoslav administration in post-World-War-I Macedonia, and its impact on development and outlooks of Jewish communities in Skopje, Bitola, and Štip.

[1] Harriet Pass Freidenreich: The Jews of Yugoslavia: A Quest for Community, Philadelphia 1979.

Views expressed in this review are the author's only, and do not express views of the United States Holocaust Memorial Museum in any way.