Glyn Parry: The Arch-Conjuror of England 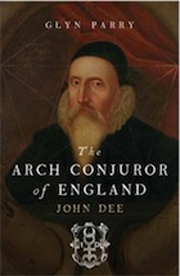 This entertaining and iconoclastic biography offers a consistent, perhaps too consistent, portrait of the famous Elizabethan alchemist, John Dee. He is here presented as a sort of buffoon, or at best, a bungling scholar, who made the fatal mistake of assuming that people less learned than himself were also necessarily stupider. Parry presents him as a more delusional, and far more helpless figure than legend suggests, an academic hopelessly at sea in international politics. The story is told with enormous verve, and an ironic delight in the combination of high politics, human silliness and idealism which it reveals.

Perhaps the key comment in the whole book comes on page 186: 'like many intellectuals, Dee mistakenly assumed that pure intellect would gain him reward, not appreciating that in the Court, that most human of institutions, personal relationships carried more weight than mere intellectual worth.' As a courtier, Dee made an amateur's mistakes; such as complaining about Lord Burghley's treatment of him, obtuse to the obvious fact that any criticism was bound to get back to him - and to his own lowly status. Dee was a genuinely learned man, a mathematician of great ability, but he believed that gave him the right to dictate rather than suggest. Therein lay his downfall.

Parry brings into focus a late sixteenth century pullulating with alchemists and prophets, and reveals the sheer amount of alchemical activity which was under way. Since banking was still rudimentary, Europe's rulers struggled to find ways of inventing wealth, and the Philosopher's Stone was a tantalising quick fix to everyone's financial problems. We have long been accustomed to perceiving the Prague of Rudolf II as a hotbed of alchemists and fantasists, but Parry insists that this was equally true of Elizabeth's London. Elizabeth herself maintained distilling houses at Hampton Court, and even employed a woman alchemist, Millicent Franckwell, in her Privy Chamber. An adventurer from the Low Countries, Cornelius de Lannoy, was able to extract a pension of £120 a year, living expenses, Somerset House in the Strand, and a country retreat, on the promise of transmuting gold. Dee's problem, perhaps, was that he was a genuine dreamer: positive that infinite riches were almost within reach, he gave insufficient attention to the problem of marketing himself, and was thus overtaken again and again by cynical adventurers. What Parry reveals, most effectively, is how many of these there were.

Cecil is shown at his most gullible, exposing shortcomings in what has seemed a formidable political machine. 'Beneath the grave exterior of his stuffy official portraits beat the excitable heart of a speculator in occult philosophy', Parry comments. He was not the only one. A whole range of people, the geographer Richard Eden, the educator Sir John Cheke, the painter Nicholas Hilliard among them, are revealed as alchemists, or patrons of alchemists.

Dee became notorious for his conversations with angels (a form of Neoplatonic magic, far from unique to him), and evidently believed he was receiving genuine spirit-messages. Whatever the genesis of the material produced in these séances, the angels evidently knew no more than Dee and his scryer, Edward Kelley. Since Dee was utterly naïve about manipulating politicians, and Kelley was not well informed, they managed the odd lucky hit, but made some dreadful mistakes. Once they left England, they knew infinitely less about the history, and less about the personalities which governed political decisions, and were completely out of their depth: they got it terribly wrong in Cracow, for example.

This is a book about John Dee, and not about his coajutor and Nemesis, Edward Kelley: however, somewhat more might have been said about him. Kelley is presented here as an alcoholic and charlatan with a violent temper: he was all that, but the implication is that he was no more than that. He cannot have been as stupid as Parry suggests: he must have been a man of drive, if not much education, with a far better instinct for self-advancement than Dee himself.

One person who is absent from this narrative is Kelley's stepdaughter, the Latin poet Elizabeth Jane Weston: her poems and correspondence were written after the events described here, but shed a good deal of light on the Kelley family's success in integrating themselves into the intellectual circles of Rudolfine Prague. The reason why Kelley starts being referred to as 'Sir Edward' is that he persuaded Rudolf to issue a patent of nobility on the quite extraordinary grounds that he was an Irish lord, one of the O'Kellys of Uí Maine, a minor but still extant family of the indigenous nobility, whose claims were not recognised by their Tudor conquerors, and would not have held water in England. Dee, from a line of upwardly mobile Welsh yeoman farmers, similarly claimed descent from Welsh princes, even Arthur, but he never made his claim stick. The Kelleys were successfully arriviste in Prague, as they could not be in England, which is relevant to Dee and Cecil's attempts to get him home. Kelley's brother Thomas contrived to marry Ludomilla, niece of the very powerful Heinrich von Pisnitz, and Elizabeth herself married Johann Leo, an advocate, and agent of Christian van Anhalt. Kelley's wife Jane, or Joan, who is no more than a cypher in Parry's text, protesting ineffectually at Kelley and Dee's sexual demands, is decidedly more of a character: given what is known of Kelley, it is interesting that she asked her daughter to write a poem attacking drunkenness, which was published by Sebastian Hornmold.

Dee often features in accounts of the Elizabethan age as a formidable magus, a view which is successfully challenged in this book. He is also remembered for his championing of exploration of the New World; again, Parry downplays his significance. The question of why he then became such a well-remembered figure is not answered (or asked): the subsequent publication of his angelic conversations by Meric Causaubon in 1659, and the interest of antiquaries such as Robert Cotton and Horace Walpole doubtless have a great deal to do with it.

But Dee is also remembered for his preservation of important late medieval manuscripts and books. Parry's basic case, that Dee is more important posthumously than he was in life, is almost certainly sound, but he gets a little carried away in representing Dee's library as nothing more than the detritus of medieval science. Dee preserved a good deal from the enormously important library of St Augustine's, Canterbury, the roots of which went back to the beginning of Christianity in England; and he owned a great deal of English and Welsh historical material, not all of which was either fictive or trivial: he seems to have owned the earliest text of King Alfred's Orosius, for example, a very important book indeed. He may have been a total failure as a magician, entrepreneur and courtier, but he is of real significance for the textual transmission of English medieval manuscripts.