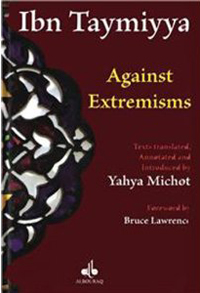 Ibn Taymiyya (d. 1328) is considered one of the most influential Islamic scholars and eminent jurists, whose provocative theological and political teachings set off intense debate among contemporary Muslim and non-Muslim scholars. After the Attacks of September 11th, the name of Ibn Taymiyya appeared with those who have been mentioned in the 9/11 reports as a reference for uncompromising violence against non-Muslims. In this regard, it should be noted that there is a broad consensus that Ibn Taymiyya's concepts of 'lawful warfare' and of the divisions of the world in 'House of Islam' and 'House of war' (Mārdīn Fatwa) have had an impact on the contemporary Jihad-Movement. [1] The perception of Ibn Taymiyya nowadays varies from one scholar to another and depends on the historical understanding of his works. Some hold the opinion that Ibn Taymiyya is one of the significant figures of Islamic oriented radicalism, while others consider him a religious scholar, whose theology and political thought should be understood in its historical framework as a teaching of the middle way. Given the background of this controversial perception of the Damascene Shaykh al-Islām Ibn Taymiyya, Yahya Michot presents in his newly published book 'Ibn Taymiyya Against Extremisms' a substantial collection of Ibn Taymiyyan translations aiming at giving him the opportunity 'to speak for himself' and 'to listen attentively to him'. By means of eighteen selected translations of Ibn Taymiyya's extracts, Yahya Michot attempts to disprove what he calls the 'falsified reading' of Ibn Taymiyya's political and theological discourses.

The book consists of eighteen texts translated first from Arabic into French by Yahya Michot and afterwards from French into English by Michot's translator and editor Jamil Qureshi. A critical analysis of Jamil Qureshi's translations cannot be undertaken in this book review, because the main purpose of the latter doesn't consist in an analytical back-translation, particularly since the translated texts of the present work are a translation of a translation. All translations are prefaced by an introduction to some of the key aspects upon which the translated texts touch.

The first text, entitled 'the Religion of the Middle Way', is a translation of an extract of Ibn Taymiyya's work 'al-waṣiyya al-kubrā', from which Michot picks out themes covering Ibn Taymiyya's discourse on a moderate position in the fields of prophethood, canons, divine attributes, free will, predestination and also of the median way of looking at the Companions of the Prophet. The main purpose of these selected texts is to undermine positions of excesses and to show the moderation that should characterize the via media in the Sunni Islam. The second text, entitled 'Unity and Respect for Diversity Within the Community', is made up of two extracts from Ibn Taymiyya, which make the duty of unity and that of tolerance a subject of discussion. The third text addresses the compatibility of Islam with pluralism by identifying the ideological origin of the notion of belonging. Likewise, the fourth text, 'Unbelief and Forgiveness', is devoted to the association of Ibn Taymiyya with 'extreme intolerance', because Ibn Taymiyya is, according to Michot, not only misunderstood by Western scholars, but also his Fatwa on the Qalandars is misinterpreted by many contemporary Islamists. Far from being a leader of militancy or Islamic radicalism, Ibn Taymiyya was, according to Yahya Michot, a 'scholastic and technical' theologian, whose teaching corresponds to the via media in Islam, far from any extremism. To him, the Damascene Sheikh al-Islām was a great spiritual master of the middle way, even in the field of Kalām theology. Given this background, Michot devoted the fifth and the sixth translations to Ibn Taymiyya's point of view regarding the attributes of God, such as hesitation, mercy and justice. The translated texts seven to eleven serve to let Ibn Taymiya himself speak primarily about the love of God and loving God on the basis of the median position in love. The twelfth text is devoted to Ibn Taymiyya's median position regarding the question of whether Muḥammad was created from light (nūr muḥammadī) or from the four elements. Likewise, the main topic of the thirteenth and fourteenth texts is the veneration and the following of the Prophet. The translated texts fifteen to eighteen focus on Ibn Taymiyya's understanding of rule and power, especially of his position regarding the behavior of Muslims under 'unbelievers', 'hypocrites' or 'non-practicing Muslims'. In this regard, Michot underscores the median position of Ibn Taymiyya by drawing attention to Ibn Taymiyya's famous recommendation: 'Sixty years with a tyrannical (jā'ir) imam are better than one night without an imam' (259).

Far from being a sporadic collection of translated texts, Michot's well-chosen compilation covers significant theological and political tracks that have a common thread, namely the via media. The main purpose of these translated texts is, on the one hand, to show that a balanced faith and moderation build the main character of Islam, and on the other hand to overturn Ibn Taymiyya's image as the 'godfather' of contemporary Jihad- movements. Nevertheless, readers might gain the slight impression that Michot is all too eager to defend Ibn Taymiyya against the charge of extremism. Furthermore, readers should not expect to find in Michot's book a profound analysis of Ibn Taymiyya's theological thought or a deep discussion of social orders of his time, nevertheless he will access a unique compilation of Ibn Taymiyya's works. Such minor shortcomings aside, Michot's work should be considered as a significant contribution to Ibn Taymiyya studies, underscoring the need for further careful translations of Ibn Taymiyya's works.