Jaakkojuhani Peltonen: Alexander the Great in the Roman Empire. 150 BC to AD 600, London / New York: Routledge 2019 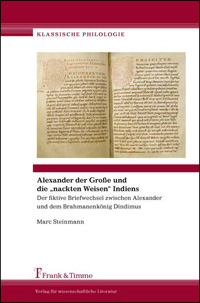 In the spring of 326 BC, Alexander the Great encountered a group of naked ascetics in a grove outside the Indian city of Taxila. Intrigued by their way of life, he sent one of his officers, Onesicritus, to interview them. The many subsequent retellings of this encounter, in which the chief of the 'Brahmans', Dandamis (Greek) or Dindimus (Latin), outlines their way of life and beliefs, form a sub-genre in classical ethnography, being filtered first through the lens of folktale and then through the medium of Cynic philosophy, and developed into a set piece for early Christian writers on asceticism. The account that developed of the ascetic, pious and eirenic way of life of the Brahmans found descendants in texts as diverse as a second century Cynic diatribe and a recasting by the fifth century Christian writer Palladius, which was incorporated into some recensions of the Alexander Romance. The Brahmans are still recognisable below the surface of the community of Therapeutae in Philo's On the contemplative life; in Clement's Carpocratians (Stromateis 3.5-10), who live in a city of the Sun, practise community of women and enjoy fellowship with the gods; in the Camarini of the fifth-century Expositio mundi et gentium; in the Macarini of the Itinerary from Eden (probably fifth to sixth century); in Pseudo-Nilus of Ancyra's (early fifth century) lively adventure story On the slaughter of the monks; and in the Blessed Ones of the History of the Rechabites (also known as The story of Zosimus -seventh century).

Marc Steinmann's impressive edition of one of the latest of these texts, the Collatio Alexandri et Dindimi (usually translated 'The correspondence of Alexander and Dindimus', though Steinmann shows that collatio really denotes a 'dispute'), is only the fourth in four hundred years, and is the first to make use of almost all the manuscripts (77 in total). The number of MSS shows how popular and widely read the text was in the Middle Ages: Petrarch, for example, knew it well. Supported by a comprehensive textual apparatus as well as an equally extensive apparatus of parallel passages from Latin literature, Steinmann shows how the Latinity and style of the work, as well as some historical allusions, tie the work to a date around AD 410-420 (74ff.): the Latin writer closest to the style of our anonymous author is Symmachus (324). A corollary of this demonstration is that the work is certainly an original Latin composition and not, as has often been thought, a translation of a lost Greek original.

Steinmann regards the work as not directly derivative of Palladius' Life of the Brahmans, which was also written in the first decades of the fifth century (if the author is really Palladius the bishop of Helenopolis), but rather one which 'einen Text darstellt, der in einer bestimmten historisch-sozialen Problemstellung (nämlich derjenigen des rechten Askese-Masses) eine Antwort artikuliert für ein rezipierendes Publikum, das sich durch literarische Erfahrungen, Kenntnisse, Urteile und auch Erwartungen auszeichnet' (66). In contrast to Palladius (and earlier pre-Christian versions of the encounter), where Dandamis/Dindimus simply lectures Alexander like a student, putting forward views that are plainly intended to be right, while Alexander's life of conquest is without redeeming features, in the Collatio there is a genuine exchange of views. Alexander gets the last word, in which he declares 'Your life is not blessedness but punishment'. The work thus presents itself as a text which opposes the extreme forms of asceticism professed by some members of the anchorite movement. Though Basil is not often mentioned by Steinmann, the development of a rule of cenobitic monastic life that Basil promoted must be part of the same movement of ideas. Christian monks are elective Brahmans.

Steinmann very effectively points to the attack by Lycinus in Lucian's The Cynic on Cynic over-asceticism. The place of Cynic ideas in the development of Christian asceticism is very significant, as Derek Krueger has shown. [1] But there is more to say about Encratism - sexual as well as dietary abstinence - than to refer briefly to 'Stoic roots' (236): though Christian writers admired Cynics, they could not find in them a model for monastic celibacy.

One of the most pressing questions about the whole set of texts focussing on Alexander's encounter with the naked philosophers is the extent to which the Brahmans purvey genuine Indian philosophy, or whether on the other hand they are a vehicle for the ideas of the first writer to report on them, Onesicritus. Recent researches by Aleksandra Szalc [2], as well as my own continuing reflections, indicate that genuine Indian ideas are at the core of this long development. Steinmann, disappointingly, declines to go into such matters in detail in his commentary, declaring that an adequate treatment would require a team of researchers (6). He regards the existence of Indian material in the work as 'fraglich' (32), noting here my earlier view expressed in 1995 but not my modified view expressed in 2008. [3] As a result he occasionally loses sight of the tradition in such comments as that on the Brahmans' abstention from bull sacrifice (2.16; 277), which he sees as a purely Christian touch. A puzzle arises too in 2.3 (216) where Steinmann discusses the Brahmans' declared lack of compassion: since this is clearly not a Christian trait, Steinmann regards it as, perhaps, an Indian idea, forgetting that compassion is one of the watchwords of Buddhism (though not indeed of Hinduism).

It would be churlish to ask for more in an already extensive and detailed commentary such as this, but there were times when I wished for a little more context and guidance on some of the wider issues that arise. Steinmann relies very heavily on linguistic parallels, to powerful effect in the analysis of the author's style. There is a very full discussion (255f.) of plague (which Brahmans do not suffer from) as a historical phenomenon, but relatively little on the important and pervasive Golden Age imagery (briefly treated on 212) that sets all the Brahman texts in a tradition of utopian writing. For example: the Brahmans in Palladius live on the paradise-island of Taprobane (Sri Lanka), as do the imaginary utopian communities described by Iambulus and Euhemerus in the Hellenistic period. Some pointers would not come amiss to English-language scholarship such as Lovejoy and Boas on primitivism, David Konstan's work on compassion (216) [4], Burstein on the sources of the Nile (249f.) [5], Chris Knights on the History of the Rechabites. [6]

Though the commentary left this reader panting for even more information, that is a measure of the richness of the material Steinmann has provided and the precision of the discussion with which he has sorted through many issues that were previously imponderable. To have established date, intellectual context and the level of style (often surprisingly poetic) are major achievements. This is a judicious and comprehensive edition which will undoubtedly form the basis for all future discussions of the Collatio.