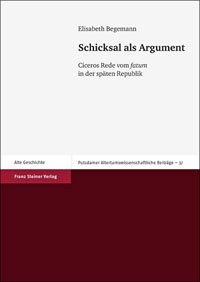 Begemann's monograph offers an exhaustive consideration of fatum and related terms in Cicero's oeuvre. She begins her discussion with a detailed analysis of his late 'theological triad' de Fato, de Divinatione, and de Natura Deorum (in this order), before moving on to the speeches (divided, somewhat untidily, into 'political', 'forensic', and 'Caesarian'). A section on the letters follows, but Cicero's poetry is passed over in silence. This is a pity since the fragments of his epic de Consulatu Suo contain much material of relevance, not least in how Cicero draws upon conceptions of the divine that belong to different cultural spheres and are logically incompatible, in particular Stoic philosophy and Rome's civic religion. But the book includes a section on fatum in the writings of contemporary authors in both poetry (Lucretius, Catullus) and prose (Varro, Caesar, Sallust, letters addressed to Cicero that have survived as part of his correspondence, as well as a letter-fragment of Mark Antony). The focus on fatum serves Begemann as gateway into larger questions, to do with Cicero's conception of the gods and the divine sphere more generally. A special concern here is divine and human agency and to what extent (if at all) Cicero imagines history as a realm circumscribed by the forces of fate over which gods and humans have little or no control.

Most of Begemann's findings are persuasive. She convincingly demonstrates that Cicero distinguishes between 'fate' and the gods (and assigns to the gods power over fate). She is right in insisting that, generally speaking, Cicero presupposes the existence of human and divine agency, which is more or less unimpaired by historical necessity. And she works out how in the post-civil-war period 'fate', paired with 'guilt' becomes an apologetic figure of thought to explain the political commitments and actions of historical losers. Yet while Fate (with a capital F) is thus by and large a negative, four-letter word for Cicero, there are moments in which he flirts with notions of destiny to score rhetorical points. Begemann's analysis is nicely attuned to such nuances. She offers a subtle analysis of those passages, for instance, in which Cicero suggests that certain individuals (such as Milo who, according to Cicero, saved the res publica by killing Clodius) are destined to perform certain deeds for the wellbeing of the commonwealth. Begemann felicitously labels this rhetorical ploy an 'ad natus-Formel' (249). In general, though, Cicero refuses to endorse any notion of predetermination, which renders key Stoic doctrines profoundly problematic: Begemann's analysis of how Cicero manages to reconcile his dislike of historical necessity with a preference for Stoicism in other respects is one of the highlights of the book.

If the overarching thesis is persuasive, the interpretation of specific texts or passages frequently invites disagreement. In her discussion of the Verrines, for instance, Begemann overlooks the supernatural plot that underwrites the entire second actio. Cicero repeatedly appeals to various avenging deities (Poenae, Furiae, and the di manes of Verres' innocent victims) as forces that have a hand in bringing the perpetrator to justice. Her statement that "Mit Voraussicht agierend wird in den Reden nur fortuna dargestellt, dies auch nur einmal" (that is, at 2.5.122) (240) is therefore doubly mistaken: apart from other divine entities that play an active part in shaping the criminal proceedings, a similar use of fortuna also occurs at 2.1.71 where the goddess is said to have saved Verres at Lampsacus so that he could stand trial in Rome ten years later. Likewise, at Fam. 15.13.2 (a letter addressed to L. Aemilius Lepidus Paullus, during his consulship in 50 BCE), Begemann perceives a contrast between the fatum of Paullus and the voluntas of Cicero: "Paullus ist zu seinen Aufgaben und seinem Handeln bestimmt, während Ciceros Agieren durch den eigenen Willen gelenkt ist" (303). But a look at the text shows that almost the exact opposite is the case. Some force of destiny, so Cicero claims, has offered Paullus repeated opportunities to help Cicero and Paullus took them up; but this same inscrutable fatum has denied Cicero the chance to reciprocate, even though he wanted to. Paullus therefore remains an autonomous agent, whereas Cicero presents his own agency as tragically compromised by forces beyond his control. The passage is both hopeful and apologetic: Cicero praises Paullus for his willingness to prove himself a good friend and supporter in the past and hopefully in the future, while also explaining why he, despite being already in Paullus' debt, keeps asking for more without being able to offer anything in return. Local disagreements occasionally include stylistic infelicities: phrases such as "diese fatalis proelium" (304) ought not to have survived the proofing.

Such mishaps, however, should not detract from Begemann's achievement: her book maintains a convincing line of argument throughout, which is always based on close engagement with the sources. She thus makes a significant contribution to our understanding of both Cicero and the intellectual life of the late Roman republic.