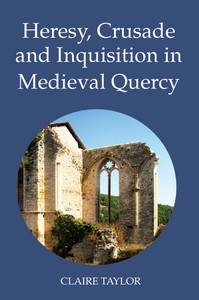 Long neglected by scholars of heresy, the historic county of Quercy in Southwestern France is currently receiving more attention. In 2007, this reviewer has devoted a book to Montauban, a major city and the hotspot of heresy in the territory. [1] In 2010, Didier Panfili has published his analysis of the nobles of lower Quercy and northern Toulousain. [2] Now Claire Taylor, who has already written a history of another formerly disregarded heretical region [3], presents a study covering the whole of Quercy before, during and after the Albigensian Crusade (1209-1229). The situation in the county is of particular interest because of the coexistence of two major heresies, dualist Catharism and evangelical Waldensianism, whereas in the rest of heretical Languedoc (almost) only Cathars are to be found. It has to be stressed from the outset that this is a well researched book, based upon a close reading of the sources, and not only the inquisitorial ones, but also those in local archives. At the same time it does not shrink away from the big questions of today's heresy scholarship, namely the controversy about whether Catharism as a belief system and social structure is an inquisitorial and historiographical construction or a medieval reality. It is precisely these qualities that make this reviewer regret all the more that the author has not engaged with his book treating the same region and sources, but only with some of his results prepublished in French (German research, which has contributed some essential studies to heresy and inquisition in Languedoc [4], is otherwise completely absent).

Taylor's book is divided into seven chapters framed by an introduction and a conclusion. Apart from presenting the region, its heretics, the scholars and the book's plan, the introduction describes the "deconstructionist" view to Catharism and proposes the Quercy case as a control. The idea is that by looking at how inquisitors dealt with a region with two heresies we can find out more about the reality of Catharism. The first chapter, "Investigating medieval Quercy: questions about sources", is mainly about three Quercy inquisitorial documents, all from the 1240ies. The most important, but also the most tricky one is the first of them, Pierre Seilans "Penitences", consisting of short notes listing individual heresy crimes and corresponding penances for several hundred inhabitants of the Quercy. Taylor assumes without any further reflection that the depositions on which Seilan's penances are bearing were collected only in 1241/42, i.e. at the dates given in the text at the beginning of each group of sentences. However there is conclusive evidence that these dates refer merely to the proclamation of the sentences (they were scheduled for three distinctly penitential periods of the ecclesiastical year [5]), whereas the depositions were taken already in the 1230ies, when Seilan made three tours of Quercy. One of the persons listed in his document is known to have deceased already in 1240 and can therefore not have been interrogated in 1241/42. [6] Moreover, Seilan obliged many male penitents to go to Constantinople and as Taylor duly remarks (120, note 166) this does not fit into the situation of the 1240ies. Yet it did make a lot of sense in the mid-thirties when pope Gregory IX ran a campaign to mobilize support for the flagging Latin Empire on the Bosporus. This campaign had an impact on French inquisitors like Robert le Bougre and Seilan. [7] So not just the depositions but also the sentences relate to that period, although they were only pronounced in 1241/42, due to a general suspension of inquisitorial activity in the late 1230ies. This dating to the very first years of the Languedocian inquisition has many consequences for the interpretation of Seilan's pioneering action in Quercy and the reactions of its inhabitants which however have escaped Taylor.

Chapter 2: "Medieval Quercy" is a concise history of the county, its towns, lordships and churches up to c. 1200. Chapter 3: "War and its aftermath" describes the Crusader campaigns in Quercy, the local consequences of the peace settlement and the onset of inquisition. Chapter 4: "'Heretical' Quercy: the evidence gathered by c. 1245" presents the data by sources and in great detail, chapters 5: "Heresy: a social and cultural life" and 6: "Heresy and what it meant" do interpret it. Chapter 7: "The reshaping of Quercy" describes how the repression of heresy and the defeat in the Albigensian crusade transformed the county. Taylor presents many interesting results of which only a few can be highlighted: In contrast to current explanations of the attractions of heresy by a catholic "void" in southwestern France, Taylor finds no lack of orthodox religious infrastructure. She notices little heretical presence before the Crusade in most of Quercy except for the southernmost part and thus concludes that it was not "confessional adherence" which "formed the basis of partisan support" (87) in the Albigensian conflict. Rather it was the very experience of war and religious persecution which made the mostly orthodox nobles of Quercy take the side of their overlords, the counts of Toulouse, against the Crusaders, and favour the heretics. Taylor also argues against the idea of heresy as "running in the family", by pointing out that members of one clan had contacts with Waldensians and Cathars alike. Instead she presents heresy as a matter of individual choice. By my own findings for the urban society of Montauban I am not able to confirm that. There, committed contacts (which need to be distinguished from superficial ones) to both heresies were very rare in one core family. However I find the book very convincing where it makes the case for the "reality" of Catharism by comparing its profile in the inquisitorial documents with that of Waldensianism in the same texts, thus showing that notwithstanding all their bias inquisitors clearly differentiated between the two groups. This makes it unlikely that one of them was completely made up. Despite some shortcomings there can be no doubt that Taylor's study is highly recommendable reading for all who are interested in medieval heresy.