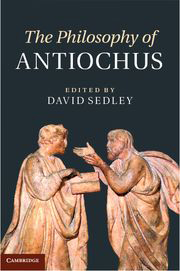 Antiochus of Ascalon is a problematic philosopher who flourished in the early first century BCE. The principal source is Cicero, some of whose speakers are represented as following Antiochus, while others might be doing so. Explicit testimonia (collected by Sedley after the fourteen essays contained in this volume) are meagre. Hence Antiochus' importance, particularly for the Greek tradition, is easily doubted, much of the testimony being hostile. However, being important to the intellectual background of Cicero, whom he certainly impressed, he has on-going interest. Further, we cannot understand complex developments in the philosophy of the first century BCE without paying attention to him. Although the school he founded in the Ptolemaeum at Athens might not have been active after the death of Antiochus' brother and successor Aristus, a wider influence may have been felt at Alexandria, where he had stayed and to which several pupils gravitated. At least one of these, Dio, maintained an allegiance to the 'Old Academy' as did Antiochus, while Aristo and Cratippus are said to have 'become Peripatetics'. The choice came close to professing an allegiance to Plato (Dio) or to Aristotle (Aristo and Cratippus), but the hostile tradition attacked mainly Stoic elements in Antiochus' thought.

The book is not designed to resolve the contradictions felt to underlie our evidence. Just as the Academy had argued both sides of each question, while Antiochus had argued both sides of the epistemological question at different periods of his life, this book contains arguments on both sides of many questions. Its dialectical exchanges nicely fit the turbulent times of Antiochus, that saw the end of the traditional schools at Athens and the rise of other centres in response to the educational needs of a world in transformation. Some differences in stance within these pages might owe something to different stages of Antiochus' philosophic development, different ways of stating his position, and different characters who represented his position in dialogic works.

It was important that this book had a sound beginning concentrating on the historical evidence. The contribution of Myrto Hatzimichali on 'Antiochus' biography' rises to the challenge, and incorporates the evidence of new readings of Philodemus' Academic History that show Antiochus' close friendship with Philodemus, and the continuing allegiance of Dio to Antiochus' kind of Academic heritage. The chapter is particularly judicious concerning the years leading up to the open break between Antiochus and the Academy's last official leader, Philo of Larissa, in 87/6B.C., and instructive on the involvement of Antiochus with embassies and Roman political life. Roberto Polito, in 'Antiochus and the Academy' adopts the radical thesis that Antiochus 'fully belongs to the Academy of his day'. He argues against the charge of 'secession'. Much of the paper revolves around a new understanding of the remark that Antiochus never left Philo until he began to have listeners of his own (Cic. Acad. 2.69), which Polito takes to imply formal pupils and a school with something akin to 'members' (33). Hence he can plausibly argue that the break did not precede 87 BCE, except that it makes Philo's attack on Antiochus at this time seem unnecessary and unprovoked. But the evidence actually suggests a separate informal circle of intellectuals studying 'Old Academic' doctrines. Yet I agree that conventional Academic teaching ceased in Athens after Philo's departure, and that calling Antiochus a 'renegade' is not appropriate. I am less convinced that Antiochus can be seen to be a proper Academic in respect of doctrine, as argued, but for me doctrine was not the criterion by which the Academy judged loyalty.

Rebecca Flemming then looks at the connections between Antiochus and Asclepiades of Bithynia. That Antiochus in his Canonica engaged with Asclepiades is suggested only by Sextus (Math. 7.201-2 = F2). However, the main role of the chapter is to pursue possible parallels between medical and philosophic sects in the first century BCE. In the end we learn that allegiance was somewhat less important to the doctors, however theoretically sophisticated they had become, than to the philosophers.

The Editor himself moves on to tackle 'Antiochus as a historian of philosophy'. The preparatory work for this vital chapter is most useful, including the reminder that Antiochus' ethics are founded mainly on Aristotle and Polemo (81), and the observation that Plato was not credited with infallibility. The thesis is that two Academic histories were developed to serve successive stages in Antiochus' own development, the first maximizing the diachronic unity of the school, the latter offering a picture involving both forward and backward steps. Sedley finds the first version at de Finibus 4.8-9 and in the Canonica, the supposed source of Sextus' doxography at Math. 7.141-260. My views are in agreement with much of this, though I resist Sedley's explanation of Sextus' appeal to 'Platonics' (89) to support the interpretation of Plato at Math. 7.143. For me 'Platonics' remains later and anachronistic shorthand for Antiochus, whereas for Sedley it refers to Speusippus and Xenocrates (98). He affirms that a Platonicus is attested for the fourth century BC (Cic. ND 1.73). Cicero applies it to Pamphilus, a Platonis auditor whom Epicurus heard at Samos, following the claim (1.72) that he lacked training from Lyceum and Academy, including Xenocrates. For Pamphilus a word other than 'Academic' is required, and it is not here a title.

Charles Brittain tackles this in characteristic hard-hitting fashion. He is scathing of attempts to reconcile Antiochus too closely with Plato, and to explain an alleged Antiochean role in the revival of doctrinal Platonism. He stresses the ancient agreement about Antiochus' embrace of Stoicism, the agreement of that with the attested account of his epistemology in Cicero's Academica, and the necessity to give priority to passages securely credited to Antiochus, bringing him into conflict with Sedley regarding Sextus at Math. 7.141-260. He understands attempts to give a more nuanced account of the stoicizing, but concentrates on Lucullus' account of Antiochean epistemology. This is fine unless Cicero's source for the passage was Sosus the Stoic's own speech in Antiochus' Sosus, which would have obscured any Platonic and Peripatetic influences. However, those who do not subscribe to a 'One Antiochus' thesis can accept it as simple Antiochean doctrine and still postulate contrasts with other periods of his thought. There is much judicious discussion of how the Stoic epistemology might fit the Antiochean account of ethics (and specifically moral psychology) in de Finibus V, which is represented rather as Peripatetic doctrine.

Georgia Tsouni now takes up that fifth book in discussing 'Antiochus on contemplation and the happy life'. We are plunged into questions about the theoretical and the practical life, into the genre of protreptic discourse, and into Aristotelian sources that include Protrepticus and Politics VII.2. The balance of practical and theoretical elements (including physics) ultimately raises questions about Antiochus and his Roman adherents. Terence Irwin moves on to 'Antiochus, Aristotle and the Stoics on degrees of happiness', where, because Nicomachus was seen as the author on EN, we meet a new emphasis on EE and MM as possible sources for Antiochean stances. The argument becomes very subtle in this quality paper: perhaps over-subtle for a reader of Antiochus' attested quality. Malcolm Schofield moves to 'Antiochus on social virtue', and struck me as exhibiting excellent understanding of Fin. IV as well as V. While I missed reference to Old Academics on two occasions, I finished this chapter understanding better why Antiochus had great appeal for eminent Romans.

Brad Inwood gives a masterly account of that elusive beast 'Antiochus on physics'. He begins rightly with the physics that affects our own human nature where the evidence is easier to handle, moving to what may be discerned of cosmic physics from Cicero's Academica 1.6 and 1.24-29, the latter a doxography presented in a manner that suited Antiochus, even where it did not foist Antiochean doctrines upon his heroes. It should be stressed that Antiochus' physics are not part of his enduring legacy. George Boys-Stones then tackles 'Antiochus' metaphysics', which rightly argues that they are not Platonic in our sense, adding for good measure that they are not Aristotelian either, and hence (to the extent that evidence permits) somewhat closer to some testimonies for the Stoics.

Logic is thinly covered, so it is good that Schofield returns to present material on the history of Carneades' famous division of ethical goals in 'The neutralizing argument: Carneades, Antiochus, Cicero'. If somewhat peripheral, it gives balance to the book while maintaining its high quality.

David Blank tackles Antiochus' influence on Varro, especially how it emerged in Varro's own work, and reports of Varro's beliefs, especially where they were once held to imply revival of Platonic Ideas. Carlos Lévy goes on to 'Other followers of Antiochus', starting with Aristo, Dio, and others, and hence with the alleged Alexandrian influences. He concludes that the signs of influence over Philo are weak. He moves to Cratippus, along with Staseas of Naples. Next come Roman aristocrats, then Lucullus and Brutus in particular, then finally Horace! The conclusion confirms that Antiochus' influence was due to his blending the active and contemplative life, thus contributing a significant part of Roman ideology.

Finally Mauro Bonazzi is awarded the demanding task of assessing Antiochus' influence on Platonism. After so much criticism elsewhere in the book, one could scarcely give a full reply on behalf of a generation of scholars including W. Theiler. Bonazzi demonstrated a series of interesting small connections that could be explored, should one speak of direct influence here? Antiochus' era influenced a later one, but did Antiochus? Might there not be common Old Academic texts? Further, the early imperial Platonizer who obviously shared Antiochus' hostility to the New Academy, Numenius, (a) viewed himself primarily as a Pythagorean, and (b) offered an utterly different history of philosophy. Bonazzi's contribution, however, was clearly required to present a balanced volume.

The book convinces me also that Antiochus belongs to late Hellenistic philosophy rather than to the scholarly world of succeeding generations. While many issues still defy resolution, my final judgment is a highly favourable one. I particularly enjoyed the contribution of the younger scholars, while appreciating the range and depth of experienced researchers.