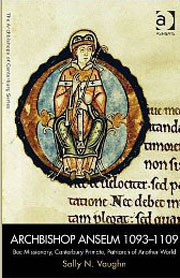 Sally Vaughn has made a strong impression on recent studies of Anselm, prior and abbot and then from 1093 to 1109 archbishop of Canterbury. She has done so chiefly through her books on The Abbey of Bec and the Anglo-Norman State (1981), Anselm of Bec and Robert of Meulan (1987), and St Anselm and the Handmaidens of God (2000). In her newest book, reviewed here, which appears in a series of scholarly biographies of the archbishops of Canterbury, she continues and consolidates her welcome explorations of Anselm, the highly independent and original theologian, as a highly effective actor also on the stage of high politics. In this book a "Narrative" section precedes and introduces one of "Illustrative Sources" which are texts, in Latin and with facing English translations, taken largely from Lambeth Palace Library MS 59, the MS which contains the most debated of the collections of Anselm's letters. But it now seems that the Lambeth collection was put together posthumously and was based in part only upon another collection made by Anselm himself and now lost. The uncertainties regarding Anselm's role in shaping this collection of his archiepiscopal letters have cast long and troubling shadows over the understanding of the embattled archbishop. But recent work by a young Finnish scholar, Samu Niskanen, does seem to have made the Lambeth collection less contentious as a historical source than it was. The collection can no longer be seen simply as the record which Anselm himself created of his struggles with Crown and Papacy nor simply as an affectionate memorial erected later by admirers of a saintly monk and archbishop. No less of a challenge to historical interpretation are the writings of Eadmer, Anselm's fellow monk and biographer, who portrayed a saint and interpreted many of the events in Anselm's life as miraculous while also supplying much accurate information. Sally Vaughn's Anselm, however, is not altogether the Anselm that Eadmer lets us see for Eadmer, careful with documents though he was, and fully appreciating that Anselm was good at business, nonetheless prefers to pass over and not dwell upon Anselm's business correspondence with the result that the modern historian has to correct the bias.

The sub-titles of the book - 'Bec Missionary', 'Canterbury Primate', and 'Patriarch of Another World' - define the main foci of this study. The discussion of the Norman abbey of Bec as a centre of mission to England after the Conquest reinforces an understanding that there is much more to Anselm's occasional visits before 1089 to Lanfranc, his former colleague and mentor at Bec, now archbishop of Canterbury, and in 1092 to Hugh, earl of Chester, than some attention given by him to his friends and to the English lands of the abbey of Bec. The spread of the network of abbeys and priories linked to Bec in both France and England was formidable and required oversight, resources and the support of the king as well as the engagement of many Bec monks in England at Canterbury and elsewhere, not to mention the engagement of Canterbury monks at Bec. Vaughn makes clearer than others have done hitherto the extent of Anselm's commitments in England as abbot of Bec. Even before becoming archbishop of Canterbury in 1093, Anselm was a leading figure in the English church and one who shared to the full Lanfranc's vision of cooperation with the Crown in the government of the realm. But as 'Canterbury Primate' Anselm clashed with King William Rufus and the most important aim of this study is to show how clearly focussed Anselm was on winning battles by cogent diplomacy and "with a shrewdness and theatricality equal to the king's own" (85). Likewise, in his struggles with King Henry I and Pope Paschal II over the investiture of prelates Sally Vaughn illustrates very well the carefulness with which Anselm conducted communications. In effect, Sally Vaughn stakes out a claim for seeing Anselm as being as thorough and as profound in adopting positions on the relationship between church and state as he was when writing his treatises of theology, exploring among other matters the nature of truth or of free will, or composing his prayers and meditations. Between the stricken and exiled archbishop and the matchless thinker Sally Vaughn finds not an embarrassing imbalance or chasm but a continuing display of intellectual and communicative gifts of the highest order.

The final section of the Narrative is not as path breaking as the previous two: Anselm's view of his status as patriarch of much of northern Europe - a pope of the North - is already known, although it is still a necessary and important component of this contribution to the "Archbishops of Canterbury Series". The selection and arrangement of the Illustrative Sources is most useful and occupies nearly half of the book. Unfortunately, there are many slips in the printing of Latin words and phrases.