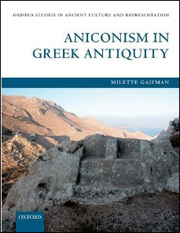 According to Herodotus, writing sometime around the middle of the fifth century BC, there is an essential difference between 'Greek' and 'Persian' modes of imagining the gods (Histories 1.131-2). Where the Greeks 'make and set up statues, temples and altars', Herodotus writes, the Persians imagine their divinities without such material trappings. This theological divergence emerges as a key measure of cultural alterity: the Persians 'call the whole circuit of heaven "Zeus" and sacrifice to him on the highest peaks of the mountains', Herodotus continues, 'since they have never believed that gods are like men, as the Greeks do'.

In her long-awaited new book, Milette Gaifman provides an exceptionally lucid, rich and provocative appraisal of such ideas in Greek historical perspective. Evaluating various literary and material sources for non-figurative Greek images of the gods, Gaifman offers a 'history of the longue dur&#233e of the phenomenon, tracing its dominant traits and development over time' (14). Aniconism - broadly associated with the 'abstention from mimesis' (1) - is not simply 'other', as Herodotus would have us believe; aniconic images also played an important role in Greek art and religious practice, and across a remarkably broad geographical and chronological span. Where the general scholarly consensus has associated aniconism with the earliest, 'primitive' phases of Greek art and religion, Gaifman demonstrates its comfortable coexistence with complementary modes of representing the divine: 'the different dots on the map of Greek aniconism come together to form a coherent scheme' (16). [1]

What makes this contribution so stimulating is Gaifman's masterly combination of sustained close analysis and broader comparative religious reflection. Right from the outset, Gaifman puts her finger on the mind-bending paradox (3-4): the very idea of the 'aniconic' implies a negation or absence of representation; at the same time, however, the aniconic is defined around a material sort of presence. For Gaifman, Greek 'strategies' of aniconism therefore take their place within what she nicely labels a 'spectrum of iconicity' (13) - one that encompasses anthropomorphic images of the gods, certainly, but one which stretches beyond the mere mimetic. 'Such testimonia speak to the complexity of the relationship between the material object and the divine that cannot be confined to a single model', as Gaifman puts it (308); 'once taken on its own terms, aniconism is no more paradoxical than any other part of the rich system of Greek religious art' (16).

By interrogating the limits of Greek figurative representation, and framing its analysis around a theological set of dilemmas, Aniconism in Greek Antiquity engages with one of the most exciting and fruitful strands of Graeco-Roman visual cultural analysis in recent years. It was Jean-Paul Vernant who led the vanguard in the late 1970s, discussing the ontological paradox whereby Greek images of gods must 'present' their subjects on the one hand and simultaneously re-present them - demarcating their absence - on the other. [2] A flurry of more recent studies has ensued, many taking issue with some of the larger secular and rationalist assumptions of post-Enlightenment art history. [3] Given this interest, it is surprising that so little attention has been paid to unworked or semi-figurative materials: as Gaifman notes (2), this is the first thematic monograph on Greek aniconism since Marinus Willem de Visser's book of 1902. [4]

Rather than privilege chronological or geographical variables, Gaifman structures her chapters thematically, organising them (mostly) around different forms of aniconic expression. After a brief introduction, the first chapter is dedicated to definitions and historiography ('What is Greek aniconism?'): having interrogated late nineteenth- and twentieth-centuries responses (with some fascinating comments on divergent 'Roman Catholic' vs. 'Protestant' views along the way: 24-5), the chapter surveys the full range of Greek aniconic modes ('rough rocks, standing stelai in different geometric forms, a range of vacant spaces, cultic sites with nothing but an altar, and numerous divine presences that are merely implied', 44-5). The following two chapters grapple with Greek (and sometimes Latin) literary testimonies. On the one hand, Gaifman explores the coexistence of aniconic and fully figural forms in Pausanias' Periegesis ('Pausanias' aniconica'). On the other, she examines the rhetoric of aniconism among a broad cast of Greek philosophers, historians and commentators ('Greek views of aniconism: The "primitive" within'): aniconism played a critical (albeit multifacited) role in defining what it meant to be 'Greek', Gaifman argues, and one in turn seized upon by early Christian apologists (for whom 'the deep past serves to reduce the anthropomorphic statue to purely a material object', 130).

If the first half of the book concentrates on texts, the second moves to archaeological materials. In chapter four, Gaifman investigates 'rough rocks' at Thera, the Athenian agora, Chalke and Paphos; by contrast, chapter five ('Standing stelai') examines wrought stones and semi-figural stelai - above all, those from Metapontum and South Italy, Corinth, Arcadia and Thessaly (some of which combine schematic shapes with anthropomorphic heads and coiffures, and in fascinating ways). Because contemporary images offer a 'second-degree' visual commentary on such images, the sixth chapter explores aniconic forms in Attic vase-painting ('The aniconic depicted: Stelai on Classical vases'), before a final chapter, this time dedicated to the cults of 'Apollo Agyieus' and Spartan dokana of Castor and Pollux ('Apollo's pointed column and the Dioskouroi's parallel beams'). In view of the cultural and chronological diversity of its case studies - which stretch from Iron Age Greece all the way through to the Christian horizons of late antiquity - readers will be grateful for the elegant conclusion which closes the book. While 'the scholarly placement of aniconism on the peripheries of mainstream Greek cult practices and visual culture is not unwarranted by the evidence we have seen' (305), Gaifman explains, the phenomenon has much to teach us about the inherent problems of figuring the gods: 'aniconism asserts the limits of anthropomorphism' (308).

What, then, to make of the book as a whole? Different scholars will come to Aniconism in Greek Antiquity with different questions and interests. In prefiguring so many of them, and laying out the underlying problems so comprehensively, the book's greatest achievement perhaps lies in the effortless gliding across subdisciplinary boundaries, as reflected in the wide-ranging (and admirably polyglot) bibliography. The detailed indices of texts, inscriptions and subjects will enable students and scholars to navigate their own adventure through Gaifman's structured analysis; similarly, the 94 photographs, diagrams and plans reproduce in a single compendium some of the most important monuments (a shame, though, that the vases illustrated in chapter six are reproduced at so small a scale).

Like all stimulating books, Aniconism in Greek Antiquity raises new questions while responding to old ones. Let me end with just one example. Taking her lead from Greek and Latin texts, Gaifman sets out to demonstrate how aniconism is bound up with religious ideas and ideologies: 'the book is about the absence of figural representation of the divine and at the same time about the complexities of giving form to the gods' (1). As one works through Gaifman's book, however, one sees these cultic discourses 'seep' into other areas of Greek art (no less than its visual criticism): I think, in particular, of semi-iconic modes of figuring the dead, reflected in the fascinating materials from Cyrene that Gaifman discusses on 238-41, as well as numerous comparanda that she does not (e.g. the so-called 'anthropoid' sarcophagi from Sidon, 'encasing' the deceased in a skin of semi-figurative stone). What is so fascinating about Gaifman's 'spectrum of iconicity' for figuring the gods, in other words, is its relationship to comparable strategies for (re-)presenting other, no less ontologically problematic subjects: if aniconism flags the problem of encountering the divine, it also interrogates fictions of representation tout court.

[1] For the historiography (above all, in the work of Winckelmann, Overbeck and de Visser), see 18-28. As Gaifman notes, 'this notion of aniconism is now enshrined in the standard reference book, the Lexicon Iconographicum Mythologiae Classicae, where "aniconic" is often listed as the first iconographical category in a standard chronological catalogue of images of a divinity or mythological hero' (25-6).

[2] Some of the most important essays are collected in J.-P. Vernant: Mortals and Immortals: Collected Essays (trans. F. Zeitlin), Princeton 1991. It is perhaps surprising that more has not been made of Georg Wilhelm Hegel's contribution (unmentioned in Gaifman's book): delivered in Berlin the 1820s, Hegel's Vorlesungen über die Ästhetik prefigure many of the more pressing contemporary debates (cf. e.g. M. J. Squire: 'On gods made men made images', in idem: The Art of the Body: Antiquity and its Legacy, New York 2011, 154-201; A. Besançon: The Forbidden Image: An Intellectual History of Iconoclasm (trans. J. M. Todd), Chicago 2000).

[3] In Anglophone scholarship, one might cite e.g. R. L. Gordon: 'The real and the imaginary: Production and religion in the Graeco-Roman world', Art History 2 (1979): 5-34, as well as the numerous contributions of Jaś Elsner - many of them collected in his Roman Eyes: Visuality and Subjectivity in Art and Text, Princeton 2007. Fundamental now is V. J. Platt: Facing the Gods: Epiphany and Representation in Graeco-Roman Art, Literature and Religion, Cambridge 2011.