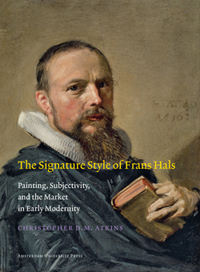 It may surprise many readers that Christopher Atkins's The Signature Style of Frans Hals represents the first book-length study devoted to the painter since the volumes by Seymour Slive and Claus Grimm appeared in the 1970s and 1980s. Interestingly, this astonishing gap of more than a generation has coincided with a proliferation of studies and exhibitions devoted to the two other most recognized names in seventeenth-century Dutch painting, Rembrandt and Vermeer. Lessons learned from the various methodologies applied to the art of Rembrandt and Vermeer certainly strengthen the foundation of Atkins's research on Hals. Based on his doctoral dissertation (Rutgers University, 2006), The Signature Style of Frans Hals weaves together previous research on the painter with the author's thoughtful insights and sound conclusions. An important addition to the literature devoted to Frans Hals, the book should serve to re-energize interest in paintings by this gifted and highly influential artist.

As the subtitle of the book suggests, the underlying issues Atkins explores are centered upon "Painting, Subjectivity and the Market in Early Modernity". Understandably, the starting point for his study is an examination of the painter's lively, unique, and masterful style, a manner noted by most writers from the painter's lifetime to the present. Atkins raises many critical questions by focusing on the how and why of Hals' decision to develop in Haarlem a manner in which, according to Theodorus Schrevelius in 1648, his figures "seem to live and breathe" (89). The author asks "why Hals would have sought to enliven his subjects through his brushwork and the selection of momentary gestures and expressions, or why seventeenth-century audiences would have appreciated and cultivated such an artistic approach" (12). In other words, what motivated Hals to develop such a signature style, and what were its immediate ramifications? Taking a broader view, what were the long-term consequences of his manner as it impacted the development of a modern aesthetic two centuries later?

Atkins goes into great detail in his introduction to set the stage for the arguments explored in the book's five chapters. Since a significant amount of the information conveyed in these pages should be familiar to those with more than a passing interest in Hals and his art, one wonders if such a lengthy introduction is warranted. Perhaps readers would have been better served, had Atkins decided to either compress or re-purpose portions of this material into a concluding sixth chapter. Nevertheless, the introduction clearly reveals the enthusiasm and depth of knowledge the author brings to his subject.

Before turning to the individual chapters, a number of general comments are in order. I would give high marks to the book's design and illustrations, as the simple, easy to navigate layout and excellent color illustrations are a hallmark of Amsterdam University Press publications. One does wish for larger color details of some of the paintings discussed. Stating that Hals didn't work entirely wet-in-wet as was long assumed and largely known only in conservation circles, Atkins has a clear understanding of the intricacies of Hals' painting technique. He also walks the reader through a number of well-chosen comparisons.

Chapter one examines how Hals arrived at the lively manner that became "uniquely his". Casting his nets perhaps too widely in his search for possible sources, Atkins cites painters active in Utrecht, Antwerp, and even Italy. More important, he rightly argues that the art produced in Haarlem had an enormous impact on Hals' artistic development. While Atkins breaks no new ground in placing works by Hals within the context of Haarlem painting, he skillfully pits Hals' portraits against examples painted by his Haarlem counterparts. He explains how the painter's lively manner effectively captured sitters "posing as if not posing", and how his works differed significantly from pictures by his contemporaries. As has long been recognized, and reiterated by Atkins, the route Hals took in bringing life to his portraits came via his genre paintings from the 1620s.

Hals then applied this distinctive approach to his portraits, a manner identified as his signature style.

In chapter two Atkins turns to the issue of artistic virtuosity by considering how highly Hals' manner was valued by art lovers, including an important group of Haarlem patrons in the 1630s and 1640s. He rightly concludes that Hals' rough style came to be linked with their refined and cultured values. This assessment is followed by an interesting discussion dealing with why collectors sought such virtuous associations. Atkins points out that information gleaned from increasingly popular etiquette guides helps to explain the motivations of collectors. Cultural sophistication as defined in these guides set many goals for its readers, including a knowledgeable understanding of the handling of paints by artists.

Chapter three explores the art market, but rather than focusing on the collector, Atkins further examines Hals' motivations for developing his signature style. He sees Hals as consciously applying a 'rough' manner to his genre paintings from the 1620s as a means to attract buyers and build his reputation in Haarlem. As Hals turned to portrait commissions in the years and decades to follow, he exploited this approach in order to guarantee similar results. The author argues that strong interest in Hals' paintings stemmed from the fact that many of his patrons in Haarlem (and elsewhere) had ties with the southern Netherlands. As such, they were preconditioned to appreciate the painterly qualities of Hals also evident in the pictures produced by Rubens, Jordaens and others. According to Atkins, collectors came to value Hals' paintings as luxury objects. In fact, he is the most often mentioned painter in surviving seventeenth-century Haarlem documents and inventories.

Chapter four takes up the issue of the 'Hals Brand'. In light of the complexity of the problems associated with Rembrandt and his circle, this chapter represents a significant contribution to Hals studies. Atkins focuses his attention on a number of Hals' 'products', including the heavily disputed 'fisherchildren' paintings. Evidence suggests that Hals ran an active workshop during much of his career, with both documented and undocumented pupils. Atkins is probably correct in concluding the workshop rarely contributed to commissioned portraits. Nevertheless, the practice of studio painters adopting Hals' signature style does raise intriguing questions regarding the production of copies and variants within the workshop. [1]

The book's final chapter moves the reader from seventeenth-century observations regarding Hals' artistic contribution to his position as a forerunner of a modern aesthetic as it was defined during the second half of the nineteenth century, and then in the decades to follow. As a backdrop for his argument, Atkins discusses the long-running debate between the ancients and the moderns. He then explores the critical fortunes of Hals and his paintings against various definitions of 'modern'. Drawing upon the ebb and flow of criticism, the author makes his point by applying the words of artists and critics alike, among them Houbraken, Joshua Reynolds, Vincent van Gogh, Wölfflin, and even Clement Greenberg. Returning to the time in which Hals labored, he concludes by noting that "Hals' paintings can and have appeared as illustrative, if not representative, of the modernity of the Dutch Republic" (236).

In the final chapter of his book Atkins argues that our post-modern world has shown little interest in Hals. Indentifying Hals' stylistic approach as fundamentally external, the author separates his paintings from examples by increasingly popular artists like Vermeer. According to Atkins, paintings by Vermeer require a quieter, more internal orientation, one quite foreign to Hals. In our constantly evolving, high tech world, however, one wonders why there shouldn't be an interest in both approaches; internal and external. With The Signature Style of Frans Hals, Christopher Atkins has brought the painter back into the discussion. One hopes this young scholar will add his voice to a new catalogue of the master's paintings, one in which connoisseurship asserts its importance alongside other relevant methodologies.

[1] See Anna Tummers: The Eye of the Connoisseur. Amsterdam 2011, for a discussion of seventeenth-century terminology related to these and other terms. Her study dovetails in many important aspects with the volume reviewed here.