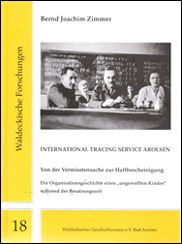 When German Cultural Minister Michael Naumann proposed to the Bundestag in 1999 possibly relocating the records of the International Tracing Service (ITS) into the documentation center for the Memorial to the Murdered Jews of the Europe, he reignited demands from the international community to reopen the agency's document trove on the persecution, incarceration, and rehabilitation of Europe's civilian population between 1933 and 1953. Diplomatic intervention succeeded in restoring access in 2008, but protracted inaccessibility obscured the institution's history and created myths about it. Separate American and British efforts to address the humanitarian crisis caused by mass displacement in Europe through Nazi persecution and World War II led to the establishment of the tracing service in 1943. Thereafter, the Allies tasked the agency with locating, and when possible, reuniting displaced persons with their families. The ITS underwent significant revision in its mandate and administration from 1945 to 1955 due to the termination of related humanitarian programs and, more significantly, the changing geopolitical situation. Bernd Joachim Zimmer's book examines this early period and is a useful starting point for those wishing to learn more about the creation and formative first decade of the ITS, as well as for future studies of the agency.

Zimmer's monograph is the first study to slowly peel back the layers of the institution's history. It is a welcome addition to literature on Allied relief efforts for displaced persons, though his engagement with this and other related historiographic threads is sparse. Relying overwhelmingly on empirical data, the author details the establishment of the agency until its transfer by the Allied High Commission to the administration of the Red Cross. Zimmer's chronicle disentangles the myriad efforts by the Allies, non-governmental organizations and private institutions that coalesced in 1945 into the military government-controlled Central Tracing Bureau. He also touches upon the keen interest of these parties to claim some stake in refugee tracing. The author discusses the Allies' decision to place the tracing bureau under the provisional administration of the United Nations Relief and Rehabilitation Administration (UNRRA) and move its expanding activities to the Hessian town of Bad Arolsen. He then explores the organization's daily operations; plans to continue them under the International Refugee Organization (IRO) following the termination of UNRRA; and the 1948 reconfiguration of the tracing bureau into the International Tracing Service by the Western Allies under operative administration of the IRO. Zimmer provides copious details and academically well-trodden background on the displaced persons problem, the creation and operations of UNRRA and the IRO. He examines some changes the reestablished organization had on the mandate and operating policies, as well as ongoing discussions about the agency's ultimate fate. Zimmer concludes with a brief section on the takeover of the tracing service by the Allied High Commission in 1951, its role in Wiedergutmachung, and the administrative transfer to the Red Cross under the control of an International Commission in May of 1955.

Zimmer's book will appeal mainly to the general public and scholars interested in learning more about the ITS, its relationship to displaced persons, and postwar relief efforts. He successfully navigates many of the complex relationships and developments during the foundational years of the agency, demonstrating the hurdles it overcame and motives that fueled international desire to continue the tracing service as other relief and rehabilitation programs closed. His ability to elaborate on the agency's frenetic early years is based on a geographically broad swath of archival research.

But the author's empirical base is the source of many of the book's problems. Zimmer consulted a large number of archival records in Europe and the United States, including the institutional files of the ITS, UNRRA and the IRO. The scope of these documents, while quantitatively impressive, is narrow and his study does not incorporate arguably the most revealing records about the tracing service from the Western Allies and West Germany. The archive of the ITS is a good foundation for establishing a basic historical framework. Indeed, one gleans already from these documents the dominance of Allied policy and impact of the unfolding Cold War on the agency's mandate and operations. The institutional records of the UNRRA in New York and IRO in Paris complement the tracing service's records with additional information on daily operations and discussions about the continuation of the agency. However, Zimmer's over-reliance on this material does not recognize that ultimate jurisdiction over the ITS lay not with these organizations, but rather with the Occupation Military Governments for Germany, the Allied High Commission, and their respective foreign offices. Although he worked at archives in Washington and Paris, Zimmer's research includes neither the two most important groups of records at the National Archives in Washington, nor the files of the French component of the Allied High Commission or French diplomatic files in Paris. He did review London's Foreign Office files, but the book does not reflect the data available in them. They offer significant background not only on the British position, but also those of its Western Allied and West German partners in the agency's affairs. Finally, he omitted key collections in the Bundesarchiv and German Foreign Office Archive about West German involvement in the ITS. These documents also contain important information about the American, French, and British positions. A cursory review of any of the aforementioned collections would have provided a more accurate and nuanced portrait of the International Tracing Service's turbulent first decade.

Zimmer's exclusion of documents from the primary state actors - the Western Allies and West Germany - thus represents a considerable lacuna that necessarily precipitates a distortion of the empirical base. Moreover, the narrative would have benefitted from a more clearly articulated thesis, greater historical contextualization and engagement with related scholarly literature. The ITS was no static or pedestrian relief agency, the evolving geopolitical situation of the post-war era heavily impacted its policies and the desire by the Western Allies and West Germany to continue its operations, even after they terminated tracing activities in 1949. For example, the author notes that after 1948 the Eastern bloc showed "no discernible interest" in the ITS (292). [1] In fact, for years thereafter, Moscow and its allies used official and unofficial channels to inquire about their nationals. However, they were unsuccessful because after July 1948 the agency operated under a strict policy of answering the inquiries of the Soviet Union and Eastern European states only in cases of death. Indeed, by this stage the Cold War punctuated every aspect of the tracing service, especially because of Washington's dominance in forming policy.

Zimmer only briefly touches upon this integral facet of the story and Paris' struggle to keep the agency a purely European affair, reflected in his relatively short treatment of the agency under the Allied High Commission. Though he touches upon the role of the tracing service in West German Wiedergutmachung, he otherwise fails to mention Bonn's involvement in the organization. The Western Allies planned to transfer operations to the Federal Republic throughout the early 1950s, which a complex nexus of factors ultimately derailed. However, the debates about the transfer to Bonn form a core episode in the institution's history and evidence of this is eminently visible in the institutional files of the ITS, British Foreign Office records and contemporaneous international press. The author makes no mention of the plans, and glosses over the May 1955 transfer of administration to the Red Cross. Because of the narrower source base consulted, the book's final chapter is much weaker in contrast to previous sections and would have been strengthened with a closer reading of the available sources.

Nonetheless, Zimmer's study is a good start to unraveling the history of the agency once ominously referred to as "Hitler's Secret Archive". Its detailed account about the agency's establishment and operations will appeal to the general public and provides an entry point into the topic for scholars. More significantly, this important first study of the International Tracing Services during its nascent stages raises valuable questions about the organization and its role in the post-World War Two world that warrant further examination.

[1] The Soviet Union withdrew from the Central Tracing Bureau in 1948 after the Western Allies decided to transfer administration to the International Refugee Organization because Moscow did not recognize it.