Janice Neri: The Insect and the Image 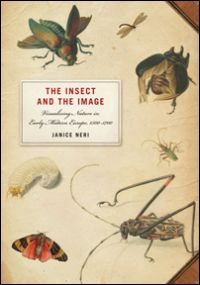 Janice Neri's book The Insect and the Image: Visualizing Nature in Early Modern Europe, 1500-1700 (Minneapolis and London: University of Minnesota Press, 2011) is a fine achievement. Clearly written, nicely illustrated, and solidly documented, Neri's book hones her interest in the juncture between art and science in upon the illustration of insects as objects and subjects, in studies of the work of Joris Hoefnagel, Ulisse Aldrovandi, Thomas Moffet, early still-life painting, Robert Hooke, and Maria Sibylla Merian.

Part I explores the establishment of conventions for illustrating insects, treating "Insects as Objects and Insects as Subjects". Chapter one documents Hoefnagel's talents as a miniaturist. Chapter two recounts the achievements of Moffet and Aldrovandi as "trustworthy organizers of the natural world" (181). Chapter three recounts how floral painters added insects to generate interest in the new genre of still-life painting. Part II expands its focus to "New Worlds and New Selves", with chapter four on the representations of insects in Robert Hooke's Micrographia and chapter five on Maria Sibylla Merian: by the later seventeenth century, Hooke and Merian featured insects as "spectacular illustrations" in their publications (181).

As the first early modern artist to concentrate extensively on insects as a subject, Joris Hoefnagel devised various strategies to manage this enormous subject, winnowing types and forms to present an impression of encyclopedic coverage-analogous, as Neri comments, to the "screening" Foucault observes in the eighteenth century (4). Hoefnagel and other artists of the "Dürer Renaissance" followed that artist's lead in foregrounding insects in detailed nature studies, yet Hoefnagel rose to the challenge to outdo his eminent predecessor, "speciminizing" his subjects with blank areas of white paper as Dürer had done, but also refining and reinterpreting his representations. Other times he created imaginary insects; Neri notes the important message thus conveyed: that "knowledge based on vision must always be probed and questioned, and that images do not simply function as transparent conduits of observations of nature, but are active participants in the construction of a particular vision of the natural world" (20).

Chapter two examines the first illustrated books on insects to appear in Europe: Aldrovandi's 1602 De animalibus insectis and Moffet's Theatrum insectorum, published posthumously by Theodore de Mayerne in 1634. Both physicians, the authors' shared interest in insects relates to changes within the medical profession during the later sixteenth century: for Aldrovandi, the new emphasis on training in material medica in Italy; for Moffet, his advocacy of Paracelsian emphasis on experiment and observation. "Cutting and pasting", Aldrovandi produced a "virtual specimen cabinet", while Moffet and his circle organized not only the insect world but also a network of correspondents sharing knowledge (and often actual specimens) of the natural world. Neri's close analysis yields discoveries: elements copied from Hoefnagel's Archetypa studii prove a slightly later date for the Rogers title page for Moffet's book; elsewhere too, Moffet's publication drew from Aldrovandi's original research without acknowledgment.

In the chapter on early still life, 1590-1620, Neri explores parallels between still-life painting, collecting practices, and the culture of curiosity. Besides the symbolic function of insects in still life (butterflies and moths representing transience, or Christian resurrection), Neri notes their contradictory potential both to enliven static images and yet also to signify decay and death. Tracing precedents for picturing insects within natural history illustration, she finds the "logic of the specimen" in the visual world of still-life, yet insects also clearly appealed to the taste for the novel and bizarre among courtly circles, in which insects ranked as collectables along with rare flowers, precious coins, jewelry, and shells.

Chapter four on Hooke's Micrographia explores the fascinating back story to a landmark in the history of scientific illustration. Most unexpected are the larger political dimensions: Hooke carefully modeled "disciplined seeing" against charges associating experimental philosophy with the "atheism, materialism, and enthusiasm unleashed during the Civil War and Interregnum" (123). As elsewhere in this study, some of the most penetrating observations are quotations from other scholars, such as Dennis' discussion of this phenomenon; part of Neri's contribution is simply the focused assemblage of such scholarship around the book's various themes, issues, and cases in point. But she has also made original contributions of her own, most notably here the methodical analysis of the origins and authorship of the Micrographia through evidence from the John Covel sketchbook.

In chapter five, Neri shifts the focus from previous Merian scholarship onto the Blumenbuch series and the "visual logic of the decorative arts", citing the "centrality of ornament and decoration" in Merian's approach and honoring its inherent merit in a way that conventional art historical values have not done (154). This yields new insights in her observation for example of the similarities between "scrolling stem" embroidery patterns and the patterning of plant parts and insects against the white pages of Merian's designs (167). Likewise, Merian's practice of circulating fixed forms of insects from her studies recalled the way that needleworkers employed embroidered slips, or also the way collectors arranged specimens in boxes, panels, and cabinet drawers.

The book offers mindful, even poignant insights that span a spectrum from the micro-level of the tiny insect, and the intensely personal traits of those who studied them, to the grand macro-level of the whole expanding global reach of the eighteenth- and nineteenth-century "golden age" of natural history. At one extreme, Neri paints a particularly sympathetic portrait of Robert Hooke the man, low-born and perhaps even mildly disfigured-characteristics that predisposed him for this work, given the solitary or even rather reclusive nature of detailed microscopic examination, and that "[G]entlemen did not engage in manual labor or craft" (134). Neri thoughtfully perceives the role of this kind of marginalization, imposed by both Hooke's "middling family background" and (similarly) by Maria Sibylla Merian's status as a divorced businesswoman, in their respective suitability for their common métier (182). But then with a much broader vision, her conclusions also observe that rendering nature into "a collectable and a commodity" (190) reveals how "the desire to possess, control, and represent the natural world was but a smaller aspect of the efforts to establish and maintain far-flung political and commercial empires" (182). Overall, she traces both "the development of the insect as subject matter, and the use of insects by artists and other practitioners to construct professional personae through making, circulating, and displaying insects as three-dimensional objects and as two-dimensional images" (181). But in turn, these minute and intimate observations tell us much about the larger dimensions of early modern Europe's evolving relationship with the natural world. The book makes a valuable contribution in a steadily growing field of literature on science and the arts.