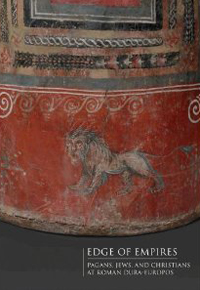 This thin volume is an interesting addition to the steadily growing number of publications on Dura-Europos, the fortress settlement on the Euphrates river whose rich archaeological harvest from the 1920s and 1930s has made it into the best test case for daily life in a small town on the periphery of first the Parthian and then the Roman empire. It is published by the Institute for the Study of the Ancient World at New York University in conjunction with an exhibition that took place there from 23 September 2011 until 8 January 2012. As is stated by the editors, the volume "retells the story that was splendidly narrated in Dura Europos: Crossroads of Antiquity" (7), both an exhibition at the McMullen Museum of Art at Boston College, jointly organised with the Yale University Art Gallery from 5 February until 5 June 2011, and a much more substantial volume of the same name, edited by L.R. Brody and G.L. Hoffman. In contrast to the broader aims of the latter [1], the New York project concentrated on "Dura-Europos as a strategic Roman garrison-city, and the ways in which this role created a pluralistic urban society, characterized by linguistic, religious, and cultural diversity" (7).

Following a brief introduction by G.W. Bowersock, the main chapter of the volume presents an up-to-date account of the French-Syrian mission that has been working at the site (that it now chooses to refer to as Europos-Dura) since 1986: P. Leriche and G. Coqueugniot, with S. de Pontbriand, 'New research by the French-Syrian archaeological expedition to Europos-Dura and new data on polytheistic sanctuaries in Europos-Dura'. The authors first discuss the mission's now well established revised historical outline (according to which a small Seleucid stronghold was initially founded on the cliff overlooking the Euphrates and a city with the circumference and plan of the present ruins was built only later in the Hellenistic period [2]), and then provide an overview of those sanctuaries that have undergone recent excavations or specific preservation work, including the so-called temple 'of Bel' (where the modern story of the site begun with the now legendary discovery by British soldiers in 1920 of splendid wall-paintings which have been restored by the French team [3]) and that 'of Azzanathkona' (a goddess, by the way, not a god, as stated wrongly by Bowersock on page 9). The article then moves on to the "transformation" of the town's religious topography following the coming of Rome - including a brief reference to "the new Citadel Temple of Zeus (A1) recently discovered at the foot of the citadel" (35) - and the fate that the temples underwent on the eve of the Sasanian onslaught. In the context of the latter issue, Leriche and his team also hope that their "ongoing exploration of the Sasanian siege's spectacular remains ... will counter various speculations about the Sasanians, who have, for example, been supposed to have conquered the site in 253" (27). [4]

The second chapter, by T.K. Thomas, 'Art historical frontiers: lessons from Dura-Europos', is a stimulating exposition of how the Durene finds still provide the art-historian with a "potential ... [that] ... is simply tremendous" (41), whereas the third one, by S. Heath, 'Trading at the edge: pottery, coins, and household objects at Dura-Europos', argues for Dura's involvement in a wide "network of exchange" (64) - as shown by findings of the so-called African Red Slip, problems caused by the now outdated recording methods from the 1930s notwithstanding - and notes how the numismatic evidence throws light on "longer-term connections to the Parthian and Sasanid empires" (66). Interestingly, Heath emphasises that the town was not "completely abandoned" (71) after its capture by Shapur's neo-Persian army, a point that has been developed in much more detail by J. Baird in an important forthcoming article. [5]

The final chapter is by J. Gascou, 'The diversity of languages in Dura-Europos', who rightly concludes that the well-documented multitude of languages and dialects attested at Dura did not automatically result in a "cacophony" (92). His learned discussion of the linguistic variety in the town's documents, full of refreshing insights, includes important considerations on the relationship between Palmyrenean and local, 'Durene' Aramaic, and draws attention to the important distinction between the languages of civic, economic and religious life - although I doubt that Roman Dura can technically be said to have become "a Roman municipium in the early third century" (83). [6] Gascou also notes the often ignored evidence for the town's "secular Greek literary culture" (91), including fragments of papyri (rather than parchments, hinting according to Gascou to their use by Roman soldiers) of Herodotus and Appian.

The four chapters are followed by a section called 'Excavations at Dura-Europos: archival photographs from the Yale University Art Gallery, Dura-Europos collection', by a 'Checklist' and finally a 'Selected bibliography'. The volume is nicely produced and illustrated with splendid images throughout.

[1] Namely, in the words of the present volume (7): "to provide a comprehensive historical overview of Dura-Europos, to highlight recent scholarship, and to place the city within its regional context."

[5] J.A. Baird: Dura deserta: the death and afterlife of Dura-Europos, in: N. Christie / A. Augenti (eds.): Vrbes Extinctae. Archaeologies of Abandoned Classical Towns, Aldershot 2012. I am grateful to Jen Baird for letting me see this paper before publication.