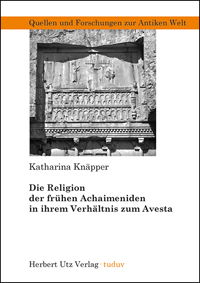 Experts have debated for more than a century whether the Achaemenids were Zoroastrians or not, with strong voices on both sides of the question. The evidence is sufficiently scant, ambiguous, and obscure to permit a wide range of ingenious arguments, but for every interpretive thrust, there is a well-known parry, and so the game continues. In recent decades, some have come to think the question has outlived its usefulness, obscuring more productive lines of inquiry. Others conclude it needs reformulation (what is involved in "being Zoroastrian", for instance) and new kinds of evidence to be considered (iconographic representations on seals, e.g.).

Enter Katharina Knäpper, who has written a clear and intelligent book that surveys most of the evidence, provides an overview of prior scholarship, advances some prudent and reasonable suggestions, and advocates a relatively simple model for research of a comparative nature. The materials she treats are well known to specialists and she offers no stunning breakthroughs or novel leaps of imagination. What is most surprising - and most admirable - is the relatively sober, straightforward way she works through the evidence and the balanced judgment she brings to the issues.

Following her introductory discussion of older studies (10-20, which curiously ignores important works by Herman Lommel, Geo Widengren, and Marijan Molé), Knäpper turns to that which most people would call "Zoroastrianism," but which she prudently and correctly characterizes as "Die avestische Religion" (21-81). The religion in question is thus defined by the text that preserves its liturgies, rather than the figure of "Zarathuštra," who has served as the text's Foucauldian author-function and the religion's (ideologically requisite, but largely and perhaps entirely fictive) prophet and founder. In summarizing the Avesta, Knäpper gives primary attention to the divine beings who populate it, along with a few key concepts, tracing the development of both through historically differentiated textual strata. In particular, she focuses on Ahura Mazdā, the chief deity, his role as creator, the epithets with which he is characterized, and the "Beneficent Immortals" (Aməša Spəntas), a group of personified abstractions that coalesced slowly, while also touching on the ritual centrality of fire and the ethical opposition of Truth (aša) and Lie (druj). Her citations of Avestan passages is apt throughout, her translations and philology being informed by the best contemporary studies (especially those of Joanna Narten and Jean Kellens).

Turning to the religion of the Achaemenians (81-131), Knäpper limits herself to Darius the Great (reigned 522-486), Xerxes (reigned 486-65), and Artaxerxes I (reigned 465-24) for whom we have the fullest documentation. In contrast to her diachronic approach to the Avesta, here she organizes her evidence by language and genre, giving separate treatment to the royal inscriptions in Old Persian (92-105), the Persepolis Fortification Tablets in Elamite (105-14), and Greek accounts of the Persians from the 5th and 4th centuries (114-31). Again, her focus is on the chief deity (Auramazdā in the inscriptions, Zeus in the interpretatio Graeca) from whom the Great King derived his legitimacy, a few other deities (Mithra, Anāhita, Humban), personified abstractions, the opposition of Truth (arta) and Lie (drauga), sacrificial ritual, and burial practices.

Having kept her discussion of Avestan and Achaemenian religion formally separate, Knäpper moves to compare them in her final chapter ("Fazit - das Verhältnis der achaimenidischen Religion zum Avesta," 131-49). The preceding discussions, however, lay the groundwork for her conclusions, which emphasize common features like Ahura Mazdā's epithet "the greatest" (Avestan vahišta-, Old Persian maθišta-, Greek megistos), or the idea that creation involved acts of foundation, establishment, and donation marked by the same verb (dā-) in Avestan and Old Persian. Differences are also acknowledged, most important of which is the unsurprising, but revealing fact that the Achaemenians regarded their king as God's chosen instrument for mediating heaven and earth, while the Avesta assigns that role to priests, above all Zarathuštra.

More could be said about other subtle points of difference, e.g. the terminology for religiously-valorized good and evil (Avestan vohu and aŋra, Old Persian naiba and gastā) or the fact that the Achaemenian king is never identified as a "possessor of Truth" (artāvan), only as a man who was "not gullible, not a liar, not a deceit-doer" (Bisitun inscription, §63). Still, Knäpper seems to me correct in the two major conclusions she offers. First, the commonalities between the religion of the Avesta and that of the Achaemenians are too numerous, strong, and complex to be the result of some random process. Second, that the process involved is not one of straightforward, unidirectional transmission of doctrine and practice from one group to another (i.e. "conversion," "influence," or the like). Rather, the two - and others, as well - were part of a larger (Indo-Iranian and/or Pan-Iranian) whole that evolved and developed in divergent ways in different regions, milieux, contexts, and conditions.

As always, one might argue one detail or another, but the whole is quite satisfying. The sole point on which I would take serious issue with Knäpper is the description of her method, which strikes me as either disingenuous or, more likely, naive. Thus, when she states "Ein Vergleich dieser beiden Religionsformen wird aber erst durch die getrennte Analyse ihrer zentralen Quellen möglich" (148), it is easier to make this principle the basis for organizing the chapters of a book than to employ it faithfully in one's research. For inevitably, we are influenced by what we already know - or think we know - and can never fully blot out such knowledge to confront one corpus only, as if de novo, in pristine isolation from the other. Implicit comparison between the Avesta and the inscriptions, for instance, or between the inscriptions and Herodotus, conditions the way we read and understand these sources, rendering one sensitive to certain issues and nuances (perhaps overly so), and regrettably unattuned to others. One can attempt to be conscious of such predispositions and keep them in check, but one cannot simply suspend them by fiat, for comparison is present at every step of the inquiry, not only its final moment.