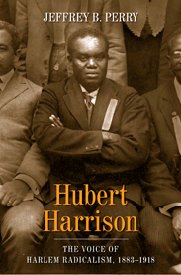 This long awaited first part of a double biography dedicated to Hubert Harrison is a very important book for those who are interested in US history and African American history in particular. The author Jeffrey B. Perry, a socialist independent scholar, dedicated a great part of his life to the study of Harrison, "the voice of Harlem radicalism". Perry not only places Harrison in the Olympus of the most influential African American activists of the Twentieth century, but sheds new lights on the black radicalism of the Tens, which paved the way for both the Garvey movement and the Harlem Renaissance.

This work is the result of thirty years of research. It is divided into three sections in which Perry reveals the life and struggle of this eclectic black intellectual via an significant array of primary sources, such as letters, newspaper articles, and personal diaries.

Hubert Harrison (1883-1927) lived during an extremely important period for the black struggle in the US: on the one hand, the period of the First World War, which improved the social position of African Americans; on the other, the Harlem Renaissance, a pivotal cultural movement, was born in Harlem, the "black Mecca" of the US. At that time the intellectual black activity was led by two of the most influential African American intellectuals of the twentieth century, W. E. B. Du Bois and Marcus Garvey. However, it was Marcus Garvey and his Universal Negro Improvement Association (UNIA), not Du Bois, who managed to attract the poor black masses. The present study helps us to understand the importance of Harrison in paving the way for this this form of Garveyism', both in introducing Garvey to black audiences in New York and in spreading a new sense of black pride among African Americans, which became fundamental to this massive movement.

Perry takes from the years when Harrison was a brilliant essayist to the moment when he became, in the words of historian Theodore G. Vincent [1], "the man most responsible for the building of black street oratory". After a complex bibliographical reconstruction of Harrison's early life, focused on his childhood in the Caribbean Virgin Islands, Perry dedicates the second part of the book, titled Socialist Radical, to the conflicting relationship which the activist had with the American socialist world. Hubert Harrison was one of the first intellectuals to identify the racial question as a central issue in the socialist debate of the second decade of the twentieth century by pointing out that African Americans were the "most ruthlessly exploited working class group in America" and that the "Negro problem is the great test of American Socialists". Who, asked Harrison, was more proletarian than the American Negro? Perry suggests that Harrison openly challenged American socialists to endorse the Afro American cause, in order to demonstrate their complete color-blindness. In addition, he was also one of the firsts black radicals to understand the linkage between economic exploitation, capitalism and racial segregation.

It emerges that Harrison was a man ahead of his time who had a strong racial consciousness and a great knowledge of American society, which allowed him to "inspire and educate the masses of Afro Americans then flocking into Harlem". (12) He was convinced that black communities had the right to take up arms in order to defend themselves from the violence of white racists. During the years of the First World War he became very critical towards the Wilson administration, especially when the President decided to intervene in the European conflict. Harrisson pointed out that the US should have solved its own democracy problem first by allowing African Americans to go to the ballots. On some occasions he used the slogan 'make the South safe for democracy', an obvious reference to Wilson's 'make the world safe for democracy'. In Harrison's view the USA could not promote itself as the champion of global democracy without solving the Afro American problem.

Perry argues that Harrison challenged the intellectual hegemony of W. E. B. Du Bois and the National Association for the Advancement of Colored People (NAACP). Harrison disagreed with the idea of controlling the black masses from above (with the institution of the Talented Ten, a group of gifted leaders that should have led the African American people): "to attempt to unite the intellectuals at the top is not the same thing as uniting the Negro masses". (271)

The third part of the book is dedicated to the New Negro Movement. Perry argues that "The Voice", the newspaper of Harrison's association (the Liberty League), gave an essential contribution to the development of this movement. "The Voice" became the first newspaper of the "New Negro Movement", better known as the Harlem Renaissance. In this section Perry consecrates Harrison as the man responsible for the awakening of the hearts and minds of the African American people during the war years, proclaiming him the real father of black radicalism. In Perry's opinion Harrison's work was fundamental to Garvey's success in the twenties.

With this book Perry has cleverly shed light not only on Hubert Harrison, one of the most important and largely unknown black American activists, but also on the Harlem Renaissance and the origins of the Garvey movement. However, two important questions remain open. The first is how did the passage of leadership of the black masses from Harrison to Garvey happen in the years following WWI ; the second is, considering the fact that many black nationalists of the Sixties - Malcolm X, Robert F. Williams, Eldridge Cleaver and the Black Power movement - seem to have been influenced by Harrison thoughts, is it possible that they had direct contact with his writings? But for these answers and others, we should wait for the second part of the biography, which will focus on the last ten years of Harrison's life.