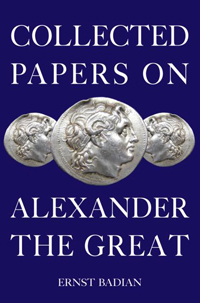 Richard Stoneman, who initiated the production of this book, should be commended for his efforts. For the first time, Ernst Badian's invaluable, major contributions to Alexander studies, published between 1958-2007, are presented in their chronological order under one cover. Eugene Borza, in a personal tribute, adds a short introduction that provides information on the author and his academic accomplishments. Borza accurately characterizes Badian's role in modern Alexander historiography as transformative, especially after he had freed it from the spell of W.W. Tarn's idealized vision of the great king. Badian began this project with two groundbreaking articles: "Alexander the Great and the Unity of Mankind" (1958), and "The Eunuch Bagoas" (1958), both of which are reproduced in this volume (Chs. 1-2). With his trademark close reading of the evidence and unrivaled detective skill at revealing scholarly fallacies (occasionally with contempt), Badian established himself as the dominant voice in the field. Borza's introduction notes these attributes, although he dwells, less felicitously perhaps, on Badian's position on the ethnicity of the ancient Macedonians ("Greeks and Macedonian" [1982] = Ch.17). Badian suggested that the ancient sources distinguished between the Macedonians and the Greeks, and this view provoked a storm of protest among those who claimed or ardently believed otherwise - Badian could enjoy being controversial. In truth, however, his more important contributions to Alexander and ancient Macedonian studies lay elsewhere.

The selection of the articles for this book was made by the author himself. It includes, aside from journal articles and book chapters, reviews that Badian justly regarded as having independent value. A highly prolific writer, he was forced to exclude some of his publications, including surveys of Alexander's story such "Alexander in Iran" (CHI 2, 1985, [420-451]). This, in the opinion of the present reviewer, was unfortunate. Badian thought that, given the state of the ancient evidence and the methodological constraints in writing a biography, writing a comprehensive monograph on Alexander would be practically impossible or doomed to fail. His account of Alexander's campaign in Iran, and similar publications, are the closest we have to what might have been Badian's unified view of Alexander, rather than separate analyses of particular aspects. Less regrettable is Badian's decision to omit shorter pieces dealing with narrowly defined issues, such as "History from 'Square Brackets' " ZPE 79, 1989, (59-70), which discusses inscriptions relevant to Alexander's dealings with Greeks and Macedonians.

Badian also updated and revised his contributions, which means that scholars would do better to cite his articles from this collection rather than from the originals. However, his revisions were selective and brief and tended not to update his discussion with comments on, or even references to, scholarly discussions that were published after his own. In general, Badian did not easily change his mind especially after his analysis was in print. This resistance to change was not due to hubris or stubbornness. The scholar believed that once he had mastered the evidence and considered its modern interpretations, he was justified in sticking with his original opinion. An example is his well-known contention that Alexander was behind the assassination of his father, Philip II. After this argument was first published in "The Death of Philip II" (1963) = Ch. 7, it provoked a profusion of publications, many of them in opposition to his thesis. Following a long period of silence, Badian reasserted his view in "Once More the Death of Philip II" (2007) = Ch. 27. He modified his position slightly when he conceded a larger role in the affair to the actual murderer, Pausanias, but he still maintained that Alexander either encouraged the assassin or knew about Pausanias' plan and did nothing to stop him.

In all of his publications, Badian held to his generally critical view of the king. He acknowledged Alexander's excellence as a military leader, but was much more interested in the king's politics, which he regarded as bordering on paranoid and deadly to those around him. If one reviewer described Fritz Schachermey's Alexander in Alexander der Grosse: Ingenium und Macht (1949) as a young Nazi let loose in the Alps, Badian's Alexander might be similarly described as young Stalin let loose in the Kremlin. His seminal, and arguably best, paper "Harpalus," (1961) = Ch. 5, described Alexander's executions of governors upon his return from India as a purge. The portrait of a calculating but fearful ruler reemerges in "The Death of Parmenio" (1960) = Ch. 3, or "Alexander the Great and the Loneliness of Power" (1962) = Ch. 6. It would wrong, however, to regard these publications as mere reflections of the author's Zeitgeist. Every investigation pays meticulous attention to the evidence; is argued with force, logic and wit; and is commendably provocative. As always, it is up to the reader to agree or disagree with the conclusions, but it is a testimony to the lasting impact of Badian on Alexander's historiography that his publications continue to be cited as foundations of further investigations.

Additional publications collected in the book deal with the main aspects of Alexander's history, either directly or in relation to a specific topic. There are discussions of the ancient sources on Alexander in a review of L. Pearson's The Lost Historians of Alexander the Great (1961= Ch.4), and in studies of Cleitarchus ("The Date of Cleitarchus" [1965] = Ch. 8. The paper appeared before the publication of POxy no. 4808, which seems to postdate Cleitarchus, but see also L. Prandi, "New Evidence for the Date of Cleitarchus? (POxy LXXI. 4808)," Histos 6, 2012, [15-26]); of Nearchus ("Nearchus the Cretan," [1975] = Ch. 13); and of Plutrach, Alexander ("Plutarch's Unconfessed Skill." [2003] = Ch. 26). There is also an essay on ancient knowledge of India ("The King's Indians," [1998] = Ch. 22, with illustrations), and, for Badian, an unusual excursion into (and a controversial interpretation of) artistic evidence dealing with the celebrated Pompey mosaic ("A Note on the 'The Alexander Mosaic' " [1999] = Ch. 23). Modern historians' views of Alexander are scrutinized in "Alexander the Great and the Unity of Mankind" ([1958] = Ch.1), which demolishes Tarn's portrayal of the king, and a review of K. Kraft's Der 'rationale' Alexander (1975 = Ch. 14), that attacks an opposing view of Alexander. Alexander's military leadership and challenges are the topic of essays on the battle of Granicus ("The Battle of Granicus. A New Look" [1977] = Chapter 15); oriental troops serving in his cavalry ("Orientals in Alexander Army" [1965] = Ch. 9); his campaign in central Asia ("Alexander at Peucelaotis" [1987] = Ch. 18), and his Persian rival, King Darius ("Darius III" [2000] = Ch. 25). The politics of the campaign and especially the plotting which, according to Badian, was one of Alexander's preferred means of getting rid of men he considered a threat are discussed in some of the above-mentioned studies as well as in "Conspiracies," ([2000] = Ch. 24). Alexander's relation with the Asian Greeks ("Alexander the Great and the Greeks of Asia Minor" [1966] = Ch. 10), and in the mainland, especially in relation to the revolt of Agis III, whom Badian heroized, are discussed twice ("Agis III" [1967] = Ch.11, and "Agis III: Revisions and Reflections" [1994] = Ch. 20), with the more recent treatment insisting, in spite of scholarly criticism, on a critical link between the revolt and Alexander's burning of the palace in Persepolis. The complex issue of Alexander's divine aspirations and their origins is the subject of two studies ("The Deification of Alexander the Great" [1981] = Ch. 16, and "Alexander the Great Between Two Thrones and Heaven" [1996] = Ch. 21), and in one chapter Badian deals with Alexander's so-called last plans and the circumstances attending their rejection by the army ("The Ring and the Book" [1987] = Ch. 19).

There is a very useful index, but it is regrettable that no collective bibliography has been assembled that would have made identifying publications cited by the author less challenging. Equally unfortunate is the price of the book, $180.00, which might make it out of reach for some scholars who could have benefitted from it. Ernst Badian, the dean of Alexander studies, especially in the 1960s-1980s, is as relevant and as valuable today as he was in the past.