Fernando Checa Cremades (ed.): The Inventories of Charles V and the Imperial Family 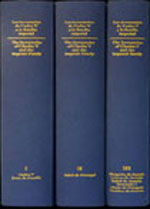 Fernando Checa Cremades and his extensive team of transcribers and contributors are to be congratulated on this elegant three volume publication which presents the full text of sixty-three inventories. These documents record a significant percentage of the worldly goods of Charles V and eight of other members of the extended Habsburg family. The significance of the imperial family who did much to shape 15th and 16th century European politics can be gauged on many levels from these inventories. For instance, the geographical reach of Charles V is evident from the list of locations where the documents are housed: Brussels, Copenhagen, Dijon, Lille, Lisbon, Madrid, Oslo, Paris, Valladolid and Vienna.

The inventories are contextualised with an overall introduction on the collections of Charles V and an essay on each of the individuals named above. The essays are in Spanish and English, while the transcripts are in the original language of the documents so French for documents in Paris and Lille, Spanish for those in Madrid and Valladolid, German in Vienna etc., and the text concludes with an index of places, people and iconography (in Spanish only).

Inventories are legal documents that record the possessions of an individual, group of individuals or an institution. Depending on the level of detail recorded about the objects, inventories can provide invaluable insights into what an individual owned, where the pieces were kept and their value. In the case of Charles V and his family, the inventories record their ownership of jewels, precious stones, plate (for dining, the chapel and the bedchamber), paintings, sculpture, books, textiles (clothes, furs and accessories, furnishings including tapestries, liturgical textiles, carpets, napery and bed linen) and trunks, coffers and boxes. As such clear parallels can be drawn between the possessions of Francis I, Henry VIII and Charles V. However, unlike the inventories of Henry VIII, they do not list ships, ordnance, weapons in the string of fortifications around the English coast.

These inventories, along with surviving objects, the buildings that they were originally housed in, bills, and receipts, allow historians, art historians and curators to explore many questions. These include how goods were valued as a treasury or repository of high value goods, and in the case of Margaret of Austria and Mary of Hungary, as a collection drawn together as an expression of taste.

Several recurrent themes feature in the essays which do not aim to catalogue the types of objects. First they explore how the various groups of objects were deployed within the various rooms and departments of royal and ducal households, and the division between objects intended for secular and spiritual space. Linked to this is a well developed analysis of how material culture was used to express ideas of royal magnificence through ceremonial. Second, the richness of the inventories serves to emphasise what has been lost. Where surviving artefacts can be identified within the inventories, they rarely survive in their original context or together. Third, the question of taste and connoisseurship is explored with particular emphasis on how taste changed from the late Middle Ages to the Renaissance and on female connoisseurship which is often hard to access. Fourth, key areas of their patronage including tapestry and the work of Titian are highlighted.

The strength of this project lies in the number of inventories, the range of Habsburg family members included, and the wealth of objects recorded. Most importantly, these volumes present the reader with the opportunity to study Charles V's material world, so making it possible to draw comparisons between his inventories and those of Francois I and Henry VIII. In addition, while there is extensive scholarship on Charles V, these inventories allow a much greater focus on Charles V's brother Ferdinand and the women in his life. Their significance is evident in the text of the inventories and in the essays by specialists in the field.

This is a very high quality publication on heavy weight paper. The font of the inventory text is rather small but this is not surprising in a publication that runs to 3,237 pages. There are no illustrations, which would have been nice, but it is possible to find many of the surviving artefacts in publications by contributors to this project. [1] The combination of high production values and the size of the books means that these three large, well bound volumes are expensive, prohibitively so for many private researchers and probably for many libraries in today's financial climate.

Price apart, there is little to criticise. However, two things would have been most welcome. First, a glossary of key terminology from the inventories, in the original language, would be very useful because specialist fifteenth and sixteenth terminology can be difficult to find in modern dictionaries. Second, a family tree and map are always helpful.

This publication represents an immense undertaking by Fernando Checa Cremades and its value lies in making the text of the inventories accessible to a much wider pool of researchers. By placing the text of these inventories in the public domain they have contributed significantly to the growing body of royal and aristocratic inventories that are in print and to the growing body of court history. Los inventarios de Carlos V y la familia imperial makes a huge contribution to researchers working on early modern material culture and one that will have lasting worth.