Wolfram Grajetzki: Greeks and Parthians in Mesopotamia and Beyond 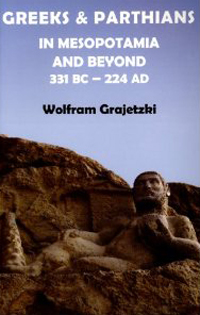 This slim volume discusses the political history and urban developments of Babylonia, Characene, and Elymaïs in the half millennium between Alexander's conquest of the region in 331 BCE and the fall of the Parthian empire in 224 CE. The work falls into two parts - "The Historical Setting" (5-28) runs through in turn the dynastic histories of the Seleucid and Arsacid imperial houses as well as the smaller regional monarchies of Characene and Elymaïs; "The Places" (29-91) outlines the urban development of Seleucia-Ctesiphon, Babylon, Uruk, Susa, Charax-Spasinou, Ikaros (Failaka), and Tylos (Bahrein) in this period.

It must be emphasized at the outset that research on the Seleucid and Parthian empires in this region must confront several problems: we lack a continuous historical narrative; the Greek epigraphic habit, outside Susa, does not seem to have been particularly well developed; and only a few Hellenistic-Parthian archaeological sites have been excavated or published. In the face of all this, Greeks and Parthians in Mesopotamia and Beyond has several merits. Above all, Grajetzki has brought together into the same discussion regions that scholarly disciplines have typically separated. Similarly, it makes good sense to treat the Seleucid and Parthian periods as a unit, given that Alexander's conquest did not bring about an immediate and fundamental change in material culture and that - what might at first seem paradoxical - the regions' major Hellenization came under the scepter of the Iranian Parthians and not the Graeco-Macedonian Seleucids. Moreover, the work benefits from occasional comparison to urban developments in the Greek cities of the Roman world. Grajetzki repeatedly focuses his discussion on particular residences or tombs, thereby adding a vividness to his urban reconstructions.

Grajetzki, assembling and summarizing excavation reports, chooses to focus on individual artifacts and antiquarian descriptions of daily life, such as the characteristics of Parthian facial hair (44) or residential front-doors (36-37), over analysis of the historical processes at work in generating such a hybrid material world. Accordingly, the book would be useful as an introductory panorama or survey of the place and period if it were not for fundamental errors of historical fact throughout. A selection: Grajetzki's claim (5) that in 311 BCE Antigonus Monophthalmus and Seleucus I concluded a peace treaty is precisely the opposite of what in fact took place - the peace treaty included all the major Diadochi except Seleucus, in order to allow Antigonus to turn against him with confidence; the Seleucid Empire did not rapidly fall apart after the reign of Antiochus III (7); the date of the Borsippa Cylinder of Antiochus I is 267 BCE not 287 (46); the idea that Susa/Seleucia-on-the-Eulaeus lost its trading role under Antiochus III (71) is at odds with the numismatic evidence; and so on. Moreover, although the book is abundantly illustrated, significant details are missing (e.g. the Royal Canal on the map of Seleucia-on-the-Tigris, Fig. 13) and in some places scale-bars would have been useful in interpreting the images (e.g. Figs. 40-41). There are also some surprising omissions. For example: Grajetzki's discussion of domestic wall-painting in the Seleucid realm (35) should have included a reference to the well-published evidence from the Seleucid colony of Jebel Khalid on the Euphrates; in noting that we find in third-century BCE Uruk officials with double names, Babylonian and Greek, (63) he omits the crucial fact that Anu-uballiṭ's Greek name, Nicarchus, was an award from king Antiochus I or II. Furthermore, inscriptions are quoted with neither standard epigraphic references nor recognition of the important scholarly debates on content and chronology. Endnotes and bibliography are inadequate.

Greeks & Parthians in Mesopotamia and Beyond directs attention to an often overlooked but nonetheless very intriguing part of the ancient world. However, the work is hampered by numerous flaws and must be read with the greatest caution.