Garrett G. Fagan: The Lure of the Arena 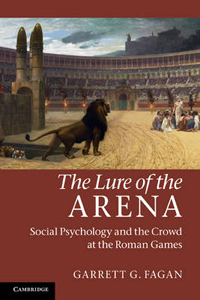 In The Lure of the Arena, Garrett Fagan uses the models provided by modern social psychology to explore the appeal of the Roman arena. Social psychology "combines the insights of individual psychology" and its interplay with larger social influences (8). Prior explanations theorized the cultural function of the games, but as Fagan points out, such social purposes would have been largely subliminal for the actual attendees. By exploring the crowd's psychological state we can grasp the "more immediate attractions of the arena" (8) and build "a bridge between the unconsciously appreciated meanings of the games in Roman culture and the lived experience of the spectator in the stands" (9).

The first chapter surveys earlier scholarship on the games and notes that studies tend to focus either on the organizers or the victims of ritualized violence rather than on those who watch such violence. In acknowledging earlier work, Fagan outlines the historical context of the games. This includes pervasive violence, the ubiquity of pain and death, the prevalence of slavery that "conditioned Romans to see certain classes of people as wholly expendable" (25), as well as conquest as a source of materials - both human and animal - for the games.

Having acknowledged the historical context, however, Fagan contends that earlier work has overemphasized the historical specificity of the games while failing to interrogate the universal psychological processes involved. In the second chapter he surveys comparative materials featuring public executions and blood sports to argue for this universality. Examples span from 2600 BC to the present and from pankration to Ultimate Fighting. The rest of the book applies theories on the psychology of groups, prejudice, and the human fascination with watching violence to ancient Rome.

One of the problems with interdisciplinary approaches is that one rarely has the wherewithal to offer a serious challenge to the prevalent ideas in an alien field. Nature and culture intersect and complement each other, and where one leaves off and the other begins is both hotly debated by social psychologists and may well vary from individual to individual. Another problem with separating psychology from society in the Roman world is the degree to which we, as westerners, have Roman cultural values interwoven with our own. To be fair to Fagan, he is a thoughtful and careful writer, but every reader will have, at moments, his or her own quibbles with arguments that touch so deeply on the nature of human psychology and culture.

Chapters three and four are best read together as three grapples with some of the theories of crowds while four examines the testimonia concerning their actual behavior. "Groups, crowds, and seats" discusses the demographics of those attending the arena, and challenges the assertion that crowd psychology is not relevant to understanding behavior in the amphitheatre because of the ordered seating and the lack of anonymity (80). Fagan points out that this view relies on Le Bon's outmoded understanding of the nature of crowds and the subjection of the individual to a highly volatile "public mind". This is now termed "deindividuation", and while it leads to greater suggestibility, it does not necessarily cause a descent into savagery, and can instead "generate resistance to such impulses" (89). The morality of the crowd is not always degenerative. Additionally, Le Bon's work fails to account for the sense of purpose and shared goals a crowd often experiences.

The following chapter sifts the evidence for what arena crowds did or said and relies heavily on martyrologies, although the Magerius mosaic also appears. This chapter picks up on the scholarship of Wiedemann, Coleman, Edmondson, and Maurin, amongst others (142). The primary dynamics seen at work are those of ingroups and outgroups. Group identity was reinforced by the physical setting of the arena and the moral and social degradation of the performers. Ironically, despite the violence on view, the spectators' identification with each other contributed to a lower degree of crowd violence than at other public spectacles such as theatrical performances or chariot races.

Chapter five considers the role of prejudice and how it contributed to the willingness of spectators to watch others mutilated and killed. He quotes Martial describing a man disemboweled by a bear. "Then what heinous crime deserved such punishment? Either in his guild he had stabbed his master in the throat, or in his madness had robbed a temple of its hoard of gold, or set you alight with brutal torches, Rome" (181). The sense that the punishment is legitimate allows Martial to enjoy the show. The legitimacy of violence could be reinforced by the public trial of criminals before the games or by the use of placards to indicate their misdeeds. Roman schoolbooks showing the proper register in which to speak to slaves demonstrate that prejudice was inculcated early. Anxiety of status pervaded Roman life, and may have been mollified by the reassurance that one belonged to the ingroup in the stands and not those slaughtered below.

Chapter six analyzes the crowd's reaction to gladiators and beast hunts in light of work on modern sports spectatorship. The main model is drawn from Apter's work on arousal (204). Sports spectators are excited by sports despite incurring no risk because they imagine themselves as the actors. I have to admit that as a female fan of American football, my experience of identification is rather more attenuated. To me, the more convincing explanation of the appeal of sports is in the final chapter. Here Fagan examines the love of violent spectacle through the lens of disposition theory. This theory claims that viewers derive pleasure from watching good things happen to a liked agent, bad things happen to a disliked agent. This, combined with Roman prejudices and the tendency for violence to become more graphic over time to stimulate arousal, goes a long way toward explaining the enthusiasm of audiences throughout the Roman world for the amphitheatre.

The general format of this book is that each chapter provides a quick overview of the relevant theories. Fagan then applies this research to the ancient evidence to show how it extends our understanding of crowd response in the ancient world. Testimonia are quoted in the text when applicable and also appear in more complete form in useful appendices. Fagan states that his work does not supersede the scholarship that claims the arena as a uniquely Roman phenomenon and this book is, in fact, a fine complement to those works and deserves a place on any reading list tackling this topic. Fagan presents a convincing case and in the process chips away at some of the smug sense of modern superiority one can experience when thinking about Roman cruelty. As he notes, many of us still enjoy the spectacle of violence in the fictional form of movies. I would argue further that similar violence to that performed in the arena is still inflicted upon animals in the abattoir and on human beings by the devices of war, only now it is no longer considered tasteful to enjoy watching it. But are we more or less civilized by not witnessing the actual violence performed by our societies?