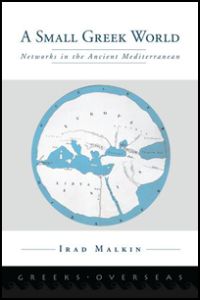 Irad Malkin's latest book begins with a paradox: why is it that what we call 'Greek civilization' crystallized in precisely the period (the 8th to late-6th centuries) during which the Greeks were founding new settlements that were ever more distant from one another? The answer, according to Malkin, may be provided by network theory - a model that has been applied successfully in a variety of disciplines, from biology to Information Technology. The connectivity established between a multiplicity of 'nodes' gave rise to a multidirectional, decentralized network which facilitated information flow and ultimately created a 'small Greek world'. While the intensity of certain flows gave rise to clustered bundles, or 'regional' networks, it only took a few random ties between distant nodes - such as those provided by itinerant professionals - to create 'short cuts' that offered connectivity across the entire network.

After an introductory chapter, which explains network theory and its potential application to the Archaic Greek world, Malkin turns to detailed illustrations of how this 'Greek Wide Web' was constructed and functioned by focusing on the phenomenon of Greek colonization. Chapter 2 considers the ties that linked the three cities of Rhodes to Phaselis in the east, Gela and Akragas in the west, and ultimately the Greek emporion at Naukratis, arguing that the network thus constructed served to consolidate both a Rhodian and a Hellenic identity. A 'pan-Sikeliote' network, linked via a hub at Naxos to the 'Theoric' network of Delphi, is the subject of chapter 3. Chapter 4 examines how a syncretism between the Greek cult of Herakles and the Phoenician cult of Melqart offered a 'middle ground' for ethnic accommodation and, ultimately, Greek claims to territorial appropriation in western Sicily. Chapter 5 traces the establishment of a Phokaian-oriented network in the western Mediterranean and how the massive influx of additional Phokaian refugees ca. 545 BCE disrupted the existing equilibrium and resulted in a fracturing into Greek, Phoenician and Etruscan 'zones of influence'. Finally, this Phokaian network is examined further in chapter 6, with a particular focus on the role that the cult of Artemis Ephesia played both in integrating the western Mediterranean into an Ionian (and ultimately Hellenic) network and in mediating between the Ionian Greeks of Asia Minor and the populations of the hinterland. A concluding section helpfully provides a clear and compact synopsis of the arguments developed earlier.

Throughout much of the book, the impression one gets is of a network-driven convergence of Hellenic identity that took place over several generations, eventually culminating in the sixth century. The foundation of the Hellenion at Naukratis, the abortive colonial ventures of Pentathlos and Dorieus, and the battle of Alalia are critical episodes in this story and it is surely not coincidental that this is also precisely the period in which the term 'Hellenes' is first attested in its more inclusive sense, in which the author of the Catalogue of Women (frs 9, 10[a] Merkelbach-West) coined a genealogy that articulated the Hellenic affiliation of groups such as the Dorians and Ionians, or that colonies dedicated ostentatious treasuries at Olympia. The evidence marshalled by Malkin would seem to corroborate the conclusion to which I and others have independently arrived - namely, that the emergence of a self-conscious Hellenic identity was a phenomenon of the sixth century rather than a byproduct of the Persian invasion of 480-479 BCE - though the identification of pre-existing networks certainly offers an attractive explanation for how and why such 'aggregative' links were given an ethnic content.

A slightly different, and rather more controversial, claim is, however, advanced - largely in chapter 3. Here, Malkin suggests that a regional Greek identity on Sicily was constructed almost from the outset. His argument is based on the existence of identifiable nomima (e.g. calendars, social divisions, magistracies) in colonies, which served to tie them to their founding-cities, and Thucydides' reference to the altar of Apollo Archegetes, outside Naxos. Malkin's insistence on the necessity for colonial foundations to adopt nomima from the beginning may be right, but is predicated on a more organized scenario of foundation than some scholars are prepared to accept. Far more problematic is the assumption that what Thucydides regarded as identifiable 'Chalkidian', 'Dorian' or 'Geloan' nomima had existed since the earliest years of a colony. After all, if the nomima employed in the fifth century by cities such as Athens, Sikyon, Argos or Cyrene are recognizably modifications to earlier sociopolitical arrangements, why can the same not be true of Gela or Akragas, for which we know precious little concerning their early history?

Thucydides' notice about the altar of Apollo, 'on which theoroi first sacrifice, whenever they sail from Sicily', could - though certainly does not demand to - be taken as meaning 'all the theoroi from Greek cities on Sicily', but while the use of the present tense clearly attests to a practice that was current in Thucydides' day, it offers no assurance that the custom dated back more than 300 years. Incidentally, contrary to what Malkin states (101), I do not doubt the altar's existence; my point is simply that, until it has been identified and excavated, we have no independent verification that it dates back as far as Thucydides claims. Nor is Appian's reference (Bellum Civile 5.109) to the apparent longevity of the altar any more conclusive: while Malkin may be right to argue that cults constitute, better than myths, a 'living reality' (102), that in itself is insufficient to guarantee their primordiality. It is, in any case, impossible to know whether the formal institution of theoria predated the (re)organization of the Pythian festival in the early sixth century.

Furthermore, while Malkin is undoubtedly right to argue that the term 'Sikeliotai', employed to designate the residents of Greek cities on Sicily, is not an invention of Thucydides (108-10), this does not necessarily falsify Carla Antonaccio's suggestion that it was a neologism of the fifth century. [1] In fact, Malkin's own view that Sikeliote identity was 'at once complimentary and adversarial' (118) to the emergence of a Sikel identity that he dates to the fifth century might argue otherwise.

Generally, Malkin offers a compelling case against 'core-periphery' conceptions of the Greek world and his idea that colonial ventures not only preceded, but facilitated, the creation of a 'virtual center' as Greeks looked 'inwards' towards the Mediterranean certainly deserves attention. Yet, one wonders exactly how 'decentralized' the theoria network of Delphi really was - a network that was, after all, initiated by embassies sent out from, not to, Delphi - while the prepositional prefix of the word apoikia, the Greek term for 'colony', does seem to implicate some sort of 'centre', however absent.

There is, however, a more fundamental issue of method involved: the nodes around which Malkin reconstructs his network are already predetermined as being Greek. As he himself states, his operating procedure was to begin by 'filling up the coastline with dots [...] representing all Greek maritime cities' (17). Although he concentrates on the links between colonies, he maintains that his approach could be profitably applied to other networks and still arrive at similar results. But it is far from clear that connecting the dots between the distribution sites of, say, Nikosthenic amphorae, or metal dedications in sanctuaries, or precious metal coinage would necessarily 'overlap or intermesh to create the matrix that formed the basis for collective Greek identity and civilization' (209). This results in a blurring of 'emic' and 'etic' categories - of failing to distinguish our systems of classification from those of the ancient Greeks - as Malkin himself concedes when he says that 'Greeks were not always aware of the networks discussed in this book' (171). Yet this privileges an 'us identity' over a 'we identity' which, as Malkin recognizes (112), is only one side of the coin. It also results in a study that is perhaps a little more descriptive, and a little less explanatory, than Malkin promises (8-9). For all that, this is a stimulating, thought-provoking and well written book that will certainly redefine the terms of the discourse in which we consider issues such as ethnicity and colonization.