Jitse H.F. Dijkstra / Greg Fisher (eds.): Inside and Out. Interactions between Rome and the Peoples on the Arabian and Egyptian Frontiers in Late Antiquity, Leuven: Peeters 2014 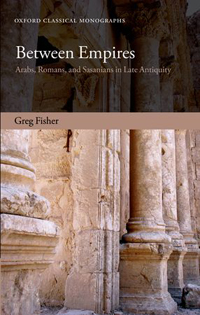 Greg Fisher's book Between Empires deals with a topic that is of great importance for the study of the late antique and early Medieval Near East. Scholars of the Late Roman and Sasanian empires as well as early Islam will find this book to be very important.

Fisher provides a detailed study of the Jafnid and Nasrid clients of the Roman and Sasanian empires. In contrast to Irfan Shahid's classic multivolume work, which portrayed them as cohesive Arab proto-states, Fisher does not merely attempt to write a national history of the Arab clients, but explores the complex dynamics by which these Arab elites simultaneously negotiated their identities within the Arab world and between the two dominant imperial hegemons. Despite the title, the Jafnid-Roman relationship is the dominant focus of the book while the Nasrids-Sasanian relationship is subordinate.

Chapter 1 presents a historical and methodological introduction to the work. Fisher introduces the Arab tribal grouping that the book concentrates on. After an overview of previous scholarship, Fisher discusses sources and methodology. Fisher states that he shifted, "the focus away from the circular question of 'what kind' of allies Arabs might have been, to the far more productive question of how links to the Roman and Sasanian empires may have influenced the political, social, and cultural development of the Jafnids and the Nasrids" (12-3).

Fisher's methodological approach, which argues that these elites were, "neither fully outside nor inside" the empires, nor settled or nomadic culture, establishes a productive framework for exploring this problem (29). Fisher presents historiographical explanations for his preference for the dynastic names 'Jafnid' and 'Nasrid' versus 'Ghassan' and 'Lakhm,' the tribal names attached to these groups that Shahid favored and with which scholarship is more familiar. He does this to stress the importance of distinguishing between the elites (which is the focus of his book) and the groups they represented.

Chapter 2 concentrates on the processes and consequences of Christianization of Arab tribes within Rome and Sasanian Iran. Building on scholarship that has explored the social and political shifts that the Christianization of the Roman imperial elite brought, he extends this important discussion to Rome's relationship with internal and external others. Christianity broke down traditional barrier between 'Romans' and 'barbarians' as Christianity became the 'Roman Religion.' Espousal of Christianity became a useful tool in achieving social mobility within the empire and for gaining access to imperial resources.

Within the Sasanian empire, Fisher argues that the Nasrids did not openly identify with Christianity. Instead, he argues that they presented themselves in a deliberately ambiguous and contradictory manner, sometimes engaging the local Nestorian hierarchy, but all while appearing to follow the occasionally persecutory policies of the Sasanian dynasty. This chapter would have benefited from greater engagement with and nuance derived from the important debates that have grown up around the important role of the East Syriac Church in the Sasanian state and the integration of Iranian cultural forms into Christianity. The picture of a persecuted minority that Fisher presents only holds true for the period between Shapur II and Yazdgerd I. Afterwards, despite, isolated instances of persecution, the East Syriac hierarchy was integrated closely into the Sasanian bureaucratic and courtly hierarchy.

Chapter 3 focuses on the core of the book: the relationship of the Arab elites and the Roman and Sasanian imperial courts. It argues for a process of increasing integration both between the empires and with and among the Arab allies, focusing predominantly on the Romans' relationship with the Jafnids.

Fisher concludes that the Jafnids (and to a lesser extent the Nasrids) were 'encapsulated' within the dominant empires, who made them into recognizable elites. Both, to some a greater or lesser degree, maintained a certain amount of autonomy and within the territories that they controlled, could levy taxes, build fortresses and raise armies.

While they often served alongside Roman or Persian armies and were identified with one or the other empire, though could, at times they operate diplomatically or militarily independent of the wishes or interests of the great empires. However, Fisher, argues: "A peculiar characteristic of such autonomy was that it could only truly exist in the form in which it did because of the support provided by the state." (125-25) When imperial patronage was withdrawn their position was undercut and they were swept away by external forces, a process he explores more fully in Chapter 5.

Chapter 4 examines the extent to which an Arab cultural, communal and linguistic identity did or did not exist in the fifth and sixth centuries. Fisher prudently urges caution against importing either nineteenth or twentieth century ideas of nationalism or the imperial ideology of post-conquest Islam, where Arabic and Arab identity defined the Muslim elite against a wide variety of conquered peoples. Fisher surveys evidence of Old Arabic and examines the extent to which Arabic was a marker of ethnic and cultural identity in the Nabataean kingdom and among the Jafnids. Fisher concludes that poetry and epic played a role in defining commonality but sufficient evidence is ultimately lacking to understand exactly how this related to the rise of Islam and Muslim conquests.

Chapter 5 concentrates primarily on evaluating the causes for the removal and exile of al-Mundhir and subsequent fall of the Jafnids. Among the probably reasons, Fisher lists, "the failure of the Jafnids to operate effectively in the top echelon of Roman politics," their role [...] in the ecclesiastical disputes of the sixth century, and the pressures caused by the shifting economic situation in Syria(.)' (176) Fisher argues, contrary to Shahid, that none of the Jafnids attained the status of a military 'Romanized barbarian,' like Stilicho and were thus always outside the, "the political administrative mainstream." (181) When, al-Mundhir fell afoul of his Roman handlers, he was without any other allies or powerbases in the Roman sphere and, thus, was quickly removed.

Though the sources are thinner, Fisher argues that the Nasrids fell due to a similar inability to navigate the inner workings of courtly power and resist direct pressure of the Sasanian empire that heretofor had not been exerted. The last Nasrid ruler, Al-Num'an, was the first (and last) who openly espoused Christianity, and having fallen foul of Khosrow I, was executed.

Chapter 6 puts these discussions into a broader historical context. Like the other chapters, this chapter concentrates primarily on the point of view of the Jafnids and their relationship with Rome. Fisher concludes by emphasizing that the Jafnids and Nasrids contributed to, but were ultimately separate from, the Roman and Sasanian empires. Similarly, they contributed to, but were outside of, the main developments of the establishment of the Umayyad caliphate and Arab identity after Islam.

The primary contribution of Between Empires is its analysis of the relationship between the Romans and the Jafnids, which drives the books argument and structure. Despite its place in the title, the treatment of the Sasanians' relationships with the Nasrids and Hujrids are subordinate to that of Rome and often serves to illustrate or contrast this main analysis. While Fisher relied, for the most part, on solid handbooks and article-length surveys for his knowledge of the Sasanian empire (such as E. Winter and B. Dignas, Rome and Persia, 2007), these are mostly written by historians working in Roman/Byzantine studies (see for example, 29n79). The book would have benefited from engagement with the primary sources and secondary bibliography of the history of Sasanian Iran. Major works on the Sasanian empire and Sasanian Christianity by such scholars as, among others, Touraj Daryaee, Rika Gyselen, Michael Morony, Scott McDonough, Parvaneh Pourshariati, and Joel Walker are glaringly absent. In this regard, it missed an opportunity to establish a similarly deep foundation for a new study of the Nasrids as the author did for the Jafnids and Rome. The approach that Between Empires takes will be a fruitful one should the author or other scholars choose to build on this work and treat the Sasanian-Nasrid relationship with similar depth and engage with the dynamics of Sasanian imperialism.

While Shahid's work will remain a classic and an important resource, Between Empires provides a compact, cogent introduction to, and explanation of, Rome's relationship with its Arab clients. It should be in every serious research library. should Oxford University Press publish a paperback version to bring down the price, it would be an excellent resource for an upper division undergraduate or graduate course on the late Roman history or the history of early Islam.