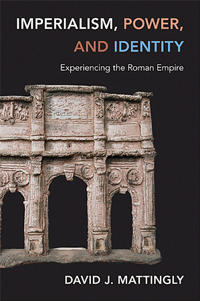 No one is more proficient in envisaging the Roman Empire through the lenses of postcolonial studies than David J. Mattingly. His seminal monograph on Roman Britain depicted the history of Albion from the viewpoint of the conquered by emphasizing the effect of Roman rule on the native population. Likewise in his earlier book, Dialogues in Roman Imperialism, coedited with S. Alcock, he chronicled the fortunes of the oppressed in Roman Africa. And his new book too, Imperialism, Power and Identity, a collection of lectures given at Tufts University, records the ways natives have experienced the Roman Empire. These past experiences are transformed into modern narratives by four categories: political power, sexual and economical exploitation and identity.

The author defines and approaches his topics by a radical synchronization of the Roman Empire with others, such as the British, French and American Empire. Behind this modus operandi lies the essentialist belief about an "intrinsic quality of the Roman Empire" (269) that makes it comparable with other imperial regimes. This synchronization, however, has two additional functions in the book. First, it helps naturalizing assertions of questionable veracity, and second, it facilitates a high ethical self-positioning of the author. So for instance the assertion "given the prevailing sexual ethos of the Roman society, such concubinage may well have been exploitative and unstable" (117) is supposedly made plausible by being embedded in the context of sexual misbehavior of the British in India and the American army in Iraq (116). The structuration in this case is made by the collocation of the words sexual ethos, to which a complex social relationship such as concubinage is reduced. By blending moralizing utterances with synchronization, the author positions himself morally (e.g. 104/5: "there was much interest in experimentation and sexual license - take the lonely British official in India who, as opportunity presented itself, satisfied his urges with masturbation, boys, men, married women, servants, prostitutes, animals, and melons"). So in the textual reality of this book sex becomes "colonial sex life, opportunistic bisexuality, predatory" and "promiscuous" (104/5). This moral positioning is emphasized also by the diction, using words with little explanatory power such as "vulgar, ugly" or "infamous" (22/3; 185). Behind these radical synchronizations, however, is no methodological reflection. The obvious tension between continuity and discontinuity of meaning, between coherence and incoherence of discourse is simply ignored. The synchronization happens only from an ethical position, as the other empires are only relevant by their quality as malum exemplum. This synchronization is itself a distortion, since all kinds of possible voices from antiquity to the present are simply avoided. So by playing with the issue of guilt and by the supposed moral superiority of his own voice, critical voices are implicitly pushed into the opposite corner. Likewise old paradigms (e.g. Romanization) are labeled as "anachronistic, undertheorized" and "uncritical" (e.g. 20; see also 4: "proempire sentiments...are less... correct for a postcolonial generation"), making of postcolonial studies the only viable and desirable approach.

There are some, however, who have a critical view of the postcolonial approach to the Roman Empire because of its methodological oversimplification, and indeed what may strike one about this book is its lack of methodology. Models (e.g. 127) and personal agendas (e.g. 271), however, have filled this lacuna, so that one knows at the very beginning what the result of the inquiry will be. Some fellow philologists may justifiably think that this has unpleasant consequences for the way the author deals with the sources, too. In order to strengthen the fundaments of his agendas and models he uses the literary output of Roman society as a quarry from which he fetches single sentences. In this radical decontextualisation and recontextualisation, Cicero adopts a timorous voice, as in a letter to his brother, where he apparently justifies the empire towards its subjects (134), and Pliny the Elder's voice becomes a proto-racist one (212). Cicero's letter to Quintus, however, has little to do with marketing subjugation to the oppressed, and more with the proper behavior of a Roman magistrate in his provincia. The reference point of this behavior is not the people in Asia but the elite in Rome and the ways in which the competition within this elite is carried out. This is the context in which one ought to put the idea of "bringing peace" as well as humanitas to the provincials or the idea of working for the wellbeing of the imperial subjects (Cic. Quinct. 1.1.27). Likewise if we would see in Pliny's statement the manifestation of a discourse that emerged in the context of the rivalries within the senatorial elite, and also see it together with the positive representation of Greek culture, during Rome's expansion towards the Hellenistic states, the proto-racist patina would be tarnished. Moreover, this patina would vanish completely were we to note that in social practice, albeit in different contexts, the same people would warn, in the senate, about the dangers coming from Greek culture and would swear on the mos maiorum, while in their villas the same people would collect Greek art and would speak and read Greek. [1] What sticks out as a general rule in this book regarding the use of literary texts is the belief that textual and extra-textual realities are the same (e.g. 186-190).

In the last part the author introduces his pièce de résistance, viz. the notion of discrepant identity, which should finally turn off the life-support machine for the concept of Romanization. Although this concept has received some criticism in the past, mostly because of the word discrepant, the author seems to hold on to it. And he would be well advised to do so, since if he were only to replace it with the word 'different', which is what he actually means by discrepant, the notion would be visible in its whole banality. Stating that Rome's subjects had different identities is like asserting that Tony Blair was the prime minister of the UK. Interestingly the author himself signs the death sentence of his own notion when as a reaction to B. Isaac's statement on the essence of Romanization he writes: "Isaac's equation between Romanization and the decomposition of ethnic identity is clearly pertinent, though I would, of course, substitute 'discrepant identity' to 'Romanization' " (215). If the two notions were simply interchangeable, then both would have the same heuristic value: none.

We can see the explanatory power of this notion, however, from two examples. The first one is a bilingual tombstone from Britain with an interesting construction of social identities, as the social position of the deceased woman in Latin is different from that in Palmyrean (218). Moreover, through the visual language her husband ascribes to her the traditional role of a matrona. Interesting for the author, however, is only the fact that she is described by her ethnic origin, which leads him to following conclusion: "the act of commemoration in this form thus attached Regina very firmly to the practices and beliefs of the military community with whom she lived." The second one is a cemetery with monumental tombs in Libya (246/67). What strikes one regarding these tombs is the highly complex ability of adoption and employment of linguistic and visual resources whose values seem to have ben repositioned from a global to a local context. So the monuments were endowed with Latin inscriptions and at this location an event called parentalia was celebrated. Along with this we have Latino-Punic inscriptions and, moreover, a local visual language. All the author can say about his case study, in which obviously specific identities are operating at the local level while also referring to a global level, is: "one may suggest that in part it reflects cultural resistance to Rome" (266). There is no obvious contradiction between these levels that would allow us to use the word resistance. It is a pity that given this great material the author is so busy labeling it instead of performing a serious analysis of how people identify themselves by using and blending together identity-building resources from different cultural repertoires. That is, he could have explained the semiosis by which identity is performed. But I suppose that this would not have fit his agenda, and hence what we have in the end is pure ideology, which tells us little about past identities but a lot about the social positioning of white, predominantly male, middle and upper class individuals from the Western World.