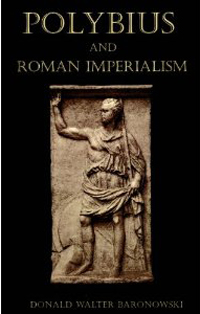 Donald Baronowski with Polybius on Roman Imperialism makes an overall interpretation of the attitudes of Polybius towards Roman imperialism, emphasizing the complexity of these. [1] In order to achieve that, Baronowski focuses his study on the question of how the Arcadian historian reacted to the expansion of Roman power over other peoples, and to what extent he identified himself with the new ruling nation. Formally, the book has an introduction, two parts in which the book is organized, a conclusion, as well as a general index and one specifically of passages cited.

The introduction (1-13) offers useful data to contextualize Polybius's discursive practice, mainly through a brief biography of him and a short chronology of the work composition, as well as a quick summary of the attitudes of the Roman authors to the Histories. Baronowski holds immediately a historiographical discussion on modern bibliography directly related to his research topic. Although useful to introduce the topic, either to students or scholars who are not expert in Polybius, said analysis is quite incomplete. [2] All in all, though brief, Baronowski's discussion of different historiographical positions is very precise. I only disagree with his one-sided reading of the recently late Domenico Musti, because Baronowski states that the Italian historian "believes that Polybius wrote from a Roman perspective" (9), which is a highly debatable opinion from our point of view. [3]

Along these chapters, readers may recognize the validity of the hypothesis defended by Baronowski, which is that, with very few exceptions (notoriously the well-known example of Agatharchides of Cnydus), Greek and sometimes some non-Greek intellectuals (philosophers, poets, prophets and historians) in the period between 3rd and 2nd centuries BCE accepted imperial dominion as a natural phenomenon of the Hellenistic interstate system. Through explaining the consequences of the Hellenistic philosophical thought on "justice" of the empires, Baronowski reaches one of his greatest achievements, because he manages to link this philosophical debate with the discussion on power and hegemony whose classical historiographical roots include authors like Herodotus and Thucydides in 5th century BCE (26-27). To conclude, I can say that this is a balanced part of the book with interesting and deeper reflections on the subject. [4] The first two chapters end with appendices.

However, readers might have expected a broader discussion, not one limited to the views of more or less contemporaneous intellectuals. It would have been expected that the author made reference to a wider range of political traditions of the Hellenistic world. In this sense, a reasonable number of epigraphical documents notably illustrates complex relationships established between small states and great Monarchies in the Greek east. [5] This everyday political experience had to play a role in shaping the attitude of the Arcadian historian towards Rome.

The second part is the most important and is entitled "Polybius' Attitude to Roman Domination" (61-163). Baronowski attempts to explain that Polybian attitude towards Roman imperial rule was similar to that of other Greek intellectuals, but unlike Posidonius, Polybius never attempted to legitimize this historical phenomenon. We can see that Polybius believed in the defensible nature of Roman imperialism, but in fact it did not mean to adopt the Roman perspective. By contrast, Baronowski strongly argues for the maintenance of certain mental reserve by Polybius, and he also thinks that Polybius was trying to preserve Roman domination in a tolerable manner to subject peoples. [6] This part has six chapters. Ch.4: "Polybius on Legitimate Expansion" (65-86); Ch.5: "Polybius on the Acquisition, Expansion and Preservation of Imperial Rule" (87-113); Ch.6: "Polybius on the enemies of Rome" (114-131); Ch.7: "Polybius in the Service of Rome" (132-148); Ch.8: "Polybius, Rome, Barbarism and Fate" (149-152); and finally Ch.9: "Polybius on the Future of Roman Empire" (153-163).

Baronowski tells clearly that although Polybius attributed legitimacy to imperialist actions of the Romans, he was not entirely seduced by Rome. The Arcadian historian was well aware of the Roman ability to take advantage of the mistakes of Greek politicians, who often unwisely allowed Rome to intervene ruinously in the affairs of their own polities. These mistakes have as a consequence the weakening of the position of these Greek polities. All in all, Roman imperial performance deserved praise as a result of its success in acquisition, expansion and preservation of its imperial rule, stressing its moderation and beneficence in the exercise of power. In Polybius's thought, this political problem is linked to good or bad treatment to subject peoples, as we can see in the examples of Philip V and the Carthaginians (87-90). [7] Moderation and beneficence of Roman imperial power are constant. Baronowski considers negligible the alleged three stages in the development of Polybian attitude to Rome, which had been proposed in his famous Sather Classical Lecture by Frank Walbank. To Baronowski there are only two stages, and the battle of Pydna marked in this case the watershed, in which Polybian opinion was not modified, but it was modified the historical context that he was representing in his history writing: After 168 BCE Rome had achieved an unchallenged supremacy.

This new hegemonic context, where armed resistance was no longer an option, forced the politicians to learn from his historical work how to deal judiciously with Roman power. That does not mean to Baronowski, and I strongly agree, that Polybius had adopted the perspective of the victors. As a historian, and always as a politician, Polybius kept his reservations about Rome, but he also was convinced about the need to teach Greek politicians to obey Rome, because obedience was no longer something optional for them. In this new situation, however, they should try to maintain some dignity and freedom.

Finally I consider that this recently published book of Baronowski will be of interest for a wide group of scholars who have the ancient world as a field of study, because it explores the historiographical practice of one of the greatest historians of Antiquity. The effort to understand the complex attitude of this Greek historian facing the phenomenon of Roman imperialism is a main contribution to Ancient History. Our knowledge of Roman imperialism depends primarily on the readings on Polybian historical narrative, but such readings may be quite different according to the approaches adopted. [8] I am sure that the presence of Baronowski's book will be essential in any specialized library in the near future.

[1] Melipal Esteban gave me a lot of useful hints to improve the English text.

[4] One of them is surely the discussion on the character of the Sosylus' work and the unfounded Polybian criticism of him (48-50). But taking into account the "historiographical" backdrop of the discussion, it may have been useful the consultation of: Marincola, J., Authority and Tradition, Cambridge, 2004: 229-234.

[5] Academic literature on the subject in recent decades is large. A good example: Ma, J. Antiochos III and the Cities of Western Asia Minor, Oxford, 1999.

[6] Baronowski is maybe too general. For "subject peoples", we should understand "Greeks" or "Hellenized peoples".

[8] Excellent examples of Harris and Eckstein, whose opposing positions are based on a careful reading of Polybius: Harris, W., War and Imperialism in Republican Rome (327-70 B.C.) , Oxford, 1985; Eckstein, A., Rome enters the Greek East. From Anarchy to Hierarchy in the Hellenistic Mediterranean, 230-170 B.C., Oxford, 2008.