John Marriott: Beyond the Tower 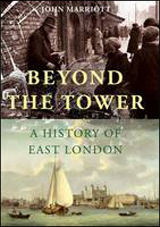 To get my one critical comment out of the way: This book's title can mislead. General histories of London seem to fall into one of two groups. Either they seek to describe the history of an expanding city [1], or they trace the development of central London through the ages. [2] Either way, London's eastern expansion does not feature prominently in them. Given the likely focus of interest on the metropolis's less well known areas during the Olympics, a history of London that includes places like Eltham, Greenwich or Blackheath might seem particularly timely. However, that is not the book John Marriott set out to write. Instead, his account is located within sight of the Tower rather than beyond it. It stays firmly north of the Thames, focusing on London's "East End", today's Tower Hamlets and Newham.

It turns out that this self-restraint is a virtue. It allows for a lively and creative analysis of a distinct part of London over a long period of time. Marriott argues that East London's development was shaped by three peculiarities from the onset of urbanization in the seventeenth century. First, there was a tendency to embrace dissent in a number of forms. The East End was a site of religious nonconformism (or diversity), a zone in which an anarchic popular culture widely seen as immoral could develop, and a hotbed of radical political controversy, particularly with regard to organized labour and the rise of a British variant of fascism.

Second, the East End was shaped by two types of employment: relatively small-scale production in workshops or at home, particularly in textiles, a tradition which extended from Spitalfields weavers to the "sweatshops" around 1900; and work at the docks - unloading, loading and generally dealing with the ships that passed through the port of London.

Third, Marriot highlights the contradictions between the two images of the East End these two peculiarities produced. One was that of a den of iniquity, a zone of danger and depravity into which respectable Londoners ventured at their peril, and from which threatening political movements or dangers to public health would emerge from time to time unless attempts were made to "improve" it. The other was that of a fairly respectable, industrious, but poor population approaching its situation with good humour - a necessary and beloved part of London life.

The great virtue of Marriott's account is that he takes these starkly opposing visions of what the East End was and meant as a starting point for a nuanced account that seeks to entangle the various strands of East London's religious, social, economic and political development while giving adequate space to the diversity of human experience. The second advantage of his approach is that it provides him with logical starting and end points for the story: the sixteenth and seventeenth centuries, when the prominence of dissent and the presence of unregulated stages marked the East End as different from the rest of the metropolis; and the later twentieth century, when the East End's economic structure as the locale of small, precarious, but viable businesses gave way to the expansion of industry to its east, creating a complicated pattern of pockets of deprivation and a shift to residential developments that amount to an end of a specific East End economy.

Obviously, framing the story in this way raises the question of how precisely East London relates to the rest of the metropolis, given that it could never function as the relatively isolated community described in popular or elite mythology. But this question can only be tackled once the mythology has been deconstructed as skillfully as in this very valuable book.