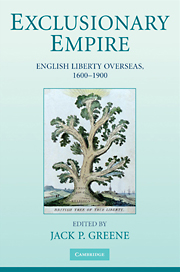 The relationship between empire and liberty in England's overseas colonies is the focus of Jack P. Greene's edited collection, Exclusionary Empire: English Liberty Overseas, 1600-1900. Liberty was an essential component within the English national identity that developed during the sixteenth and seventeenth centuries. With English dominion came an expectation of a certain level of liberty by the subjects living under it. Codified by the Magna Carta and supplemented by centuries of unwritten tradition, English liberty entailed both an obligation of service to the state and the right of self-determination that complemented that responsibility. After the Glorious Revolution, as Greene has previously argued, that bond was further clarified by the right to be free of arbitrary government and the duty to the state to get rid of it. [1]

Nonetheless, there was a strict delineation between the liberty enjoyed by white subjects of English decent and those incorporated into the colonial polity by varying degrees of force. Even within the free white settler populations, there was an element of exclusion, as Greene points out: "only those few who met the property requirements for the franchise thus fully enjoyed that most celebrated right of Englishmen, not to be taxed or governed without their consent." (4-5) The degree in which the English colonies developed institutions of liberty was largely dependent on their geographical separation from the metropolis, Greene argues. Yet regardless of the level of agency enjoyed by these entities, liberty itself was defined by levels of exclusion. As Greene and his fellow authors convincingly demonstrate, "in Britain and in the 'free' segments of the empire, political liberty would continue to be an exclusionary liberty". (24)

An important aspect of this collection is the geographical and temporal scope of Exclusionary Empire. Amongst an introduction and ten essays, the book spans most of the settler empire the English created from the seventeenth through nineteenth centuries. Nearly half of the collection is centered in the Western Hemisphere, with essays focusing on British North America, the West Indies, Canada, and the United States. Other chapters cover the metropolis, Ireland, India, Australia, New Zealand, and South Africa. The utility of geographic inclusiveness coupled with a longue dur&#233e approach allows the reader to contextualize their own field within the gaze of the larger empire.</p> <p>Elizabeth Mancke, in "The Languages of Liberty in British North America, 1607-1776", charts "the plural and plastic meanings of liberty", noting that "it is in the tension between the invocation of an abstract ideal of liberty and the plural, plastic, particularistic, and often exclusionary expressions of liberty that the early modern legacy of English liberties continues to have resonance". (49) Greene examines the English West Indian world in "Liberty and Slavery: The Transfer of British Liberty to the West Indies, 1627-1865", revealing the devolution of British notions of liberty in the face of life in slave-dominated societies. Peter Onuf explores the duality between liberty and slavery in the United States in "Federalism, Democracy, and Liberty in the New American Nation", forwarding the notion that amidst a national government in which "slaveowners dominated the machinery of state power", Northerners were forced to confront their own ideas of liberty in light of the institution of slavery. (158) Investigating the northern most Anglo-American colonies in "Liberty, Order, and Pluralism: The Canadian Experience" Philip Girard persuasively explains "that the parliamentary tradition of 'modern liberty' is sufficiently flexible to reshape itself in significant ways to accommodate demands for various kinds of freedom, provided citizens are sufficiently aware and engaged to make those demands". (190)</p> <p>Eliga H. Gould studies "the great palladium of British liberty" in "Liberty and Modernity: The American Revolution and the Making of Parliament's Imperial History". (112) Exploring the sovereignty of Parliament in the metropolis and periphery, Gould points out that while Britain's actions during the American Revolution "affirmed [...] Parliament's boundless imperial authority", the revolution led to "new connections" developing "between the British Empire and the former colonies". (129) James Kelley demonstrates in "'Era of Liberty': The Politics of Civil and Political Rights in Eighteenth-Century Ireland", that "the fact that the Irish Constitution provides for a bi-cameral legislature that possesses enough echoes of its more exclusive eighteenth-century predecessor suggest also that the eighteenth century's preoccupation with the principle and practice of liberty has also had an enduring legacy". (111)</p> <p>The final chapters in <i>Exclusionary Empire</i> explore colonial developments in the late eighteenth and nineteenth centuries. Robert Travers, in "Contested Despotism: Problems of Liberty in British India", studies the ways in which settlers protected their liberty, finding that by the twentieth century, "a less confident community of British and European settlers was firmly bound to the fortunes of the British government, and earlier visions of a multi-ethnic or creolized Indian public were long forgotten". (219) Richard Waterhouse establishes in "'[...] a bastard offspring of tyranny under the guise of liberty': Liberty and Representative Government in Australia, 1788-1901", that constitutional development in Australia, "rather than promoting a spirit of independence [...] strengthened the commitment to nationhood within the empire". (220) James Belich finds, in "How Much Did Institutions Matter? Cloning Britain in New Zealand", that "institutions did matter, but they mattered most when they converged with shifts in other dimensions of history, which sometimes mattered more". (268) Finally, in "The Expansion of British Liberties: The South African Case", Christopher Saunders points out that "the roots may have remained relatively shallow, but liberal ideas prevailed in the democracy born after the collapse of apartheid". (270)</p> <p>Considered in total, the essays in <i>Exclusionary Empire</i> reveal the complementary and contesting ways in which settler colonies throughout the English Empire sought to protect and define their liberty. The collection can be read with profit by students of both English colonial history and developing notions of liberty in general. We can expect that <i>Exclusionary Empire</i> will remain an important impetus for related studies in the coming decades.</p> <p><br /><span class="underline">Note</span>:</p> <p>[<a href="#fna1" name="fn1">1</a>] Greene: The Glorious Revolution and the British Empire. 1688-1783, in: Greene: <i>Negotiated Authorities. Essays in Colonial Political and Constitutional History</i>, Charlottesville 1994, 78-92.</p> <p class="italic" style="text-align: right">Ian J. Aebel</p> </div> </div> </div> <div id="page_footer"> <div class="ie6_font_size" id="separator"></div> <p>issn 1618-6168 / www.sehepunkte.de <img height="10" src="/images/sp10.jpg" width="10"> </p> </div> </div> </body> </html>