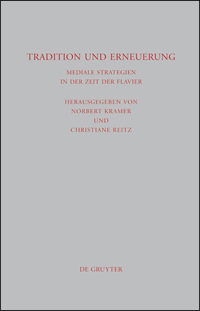 This collection of essays on the culture of the Flavian era is the product of a 2008 conference at the University of Rostock. It successfully complements a number of other multi-authored essay collections on Flavian culture. Flavian Rome: Culture, Image, Text (Leiden, 2003), edited by Anthony Boyle and W.J. Dominik, granted more preference to literature than to material culture. Flavian Poetry (Leiden, 2006), edited by Nauta, van Dam, and Smolenaars, focused almost exclusively on the concerns of its title. The Companion to the Flavian Age of Imperial Rome, edited by Andrew Zissos, will appear next year from Wiley-Blackwell; this reviewer is a contributor. The volume under review redresses some of the imbalances of the previous collections. Material and epigraphical evidence has now come to the forefront: 7 of the 18 chapters survey art, architecture, inscriptions, numismatics, and sculpture, as opposed to 5 of the 25 in Flavian Rome. Less commonly studied authors such as Dio Chrysostom and Silius Italicus receive examination in independent chapters.

Since the limited space of this review does not permit full discussion of each chapter, I shall mention some of the collection's highlights. Several chapters provide useful surveys of large subjects. Norbert Kramer, one of the collection's editors, provides a lengthy account of the Flavian emperors' provincial administration in Asia Minor. For Kramer, the evidence from this province indicates the need for reframing the familiar controversy over an "active" or "reactive" emperor. The cities of Asia Minor competed over proximity and access to the emperor. Representation of the emperor may therefore reflect such competition rather than a response to a specific imperial initiative. Javier Andreu's chapter complements Kramer's by presenting an extensive dossier of inscriptions illustrating the Bautätigkeit and Baupolitik pursued by Vespasian and Titus in the cities of the Roman empire. Volker Michael Strocka systematically reviews each genre of Roman art in order to isolate characteristics of the "Flavian style".

A number of the studies focus more closely on individual aspects of the representation of the emperors and their families. Annetta Alexandridis studies the visual representations of the women of the imperial family, focusing primarily on coin portraits. She observes that the preference for representing the emperor's living wife may provide one reason for the relative lack of representations of Flavian women in comparison to Julio-Claudian. Ruurd Nauta provides an unexpected but thoroughly convincing argument regarding Domitian's posthumous representation as caluus Nero, integrating both literary and material evidence. Such disdainful comparisons between the last Flavian and last Julio-Claudian emperor naturally only became possible after Domitian's death.

Many of the literary studies similarly address single issues. Raymond Marks offers a response to Syme's observation that Julius Caesar's memory was rehabilitated in the Trajanic era, in part as a result of acceptance of the inevitability of imperial rule. Marks observes that such acceptance was no less evident in the poetry of the Domitianic era. It was rather in the Neronian era that Seneca and Lucan's unflattering portraits of Caesar were produced; Domitian instead pursued a policy of pro-Augustanism and anti-Neronianism, the latter an inheritance from Vespasian. Thorsten Fögen examines the Elder Pliny's use of literary authorities such as Aristotle (primarily as a zoological source) and the Elder Cato, who serves as a medical, agricultural, and most importantly as a moral authority.

The contributors' mandates carefully avoid overlap, and treatments of each subject generally represent the scholarly state of the art (which could not always be taken for granted with some of the contributions to Flavian Rome or Flavian Poetry, the earlier edited collections). Pairs of successive chapters often offer complementary examination. The complementarity of the chapters by Kramer and Andreu has already been mentioned. Further examples include Jürgen Hodske's study of mythological art at Pompeii, which both follows and complements Strocka's survey of various genres of Flavian art; Gunnar Seelentag's chapter on the numismatic representation of Titus and Domitian is similarly followed by Alexandridis' study of the coin portraits of the women of the imperial family. The reader is thereby encouraged to read the volume sequentially rather than selectively, as all too often happens with edited collections. The volume's high price is somewhat justified by its flawless production (there are almost no significant misprints) and its inclusion of 72 pages of illustrations, many in color.