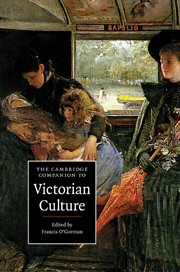 With an 'Introduction' and fifteen concise but wide-ranging chapters, the Cambridge Companion to Victorian Culture offers itself as an entry point and means of orientation for students and the informed reader, but is also a source of interest, inspiration and frequent delight for advanced scholars. While the format offers comprehensiveness as well as logical and factual progression, individual chapters contain important arguments in their own right. The 'Introduction' explores - of course - the term Victorian, the chronology associated with it, and interpretations of 'culture'. It explains the choice of contributions by pointing to recent theoretical arguments that the past is unknowable, except through existing cultural parameters and a multiplicity of possible viewpoints, and argues the case for the avoidance of neatness and consideration of a variety of approaches. Nevertheless, implicitly acknowledging that Victorian culture derived a great deal of its richness, complexity and character from scientific, technical and economic developments, the volume begins with three chapters on these subjects. These examine the way in which advances were digested in literary sources; the way in which literature was shaped formatively by economic, social and technological advance; the use of literary genres to advance scientific theories; the close connection between humanistic and scientific research, not least in the methodological positions of scientific naturalists and literary realists, described as 'Victorian siblings'; and the trajectory of science towards professionalism and independence. A chapter on war follows. This constitutes a logically unexpected detour, but presents a solid and important argument that Victorian culture was substantially shaped by militarism, even while pacifism, Gladstonian rhetoric against foreign 'meddling', and the Pax Britannica are better recalled and more researched by historians. The following chapters cover music, theatre, popular culture, printed satire, journalism, art and domestic arts. They lead the reader successively through the ways in which technical changes altered culture, and the way in which authors and artists in these cultural spaces reflected upon and used that technical change and the evolution of society they were witnessing. The Land ohne Musik hypothesis is countered. Notions of theatrical decline are questioned in view of the richness of illegitimate theatre. The Victorian discussion of 'popular culture' with a view to edification of the masses is seen to give way to more autonomous, modern, 'low brow' consumerism. The final three chapters offer alternative senses of closure: a discussion of Victorian literary theory reflects back on the aesthetic discussions interwoven in previous chapters, but also highlights - contrary to later mythology - the Victorians' developed sense of the contingencies of their own culture and the extent to which they recall, and even pre-empted, post-modern cultural theory. A chapter on 'the dead', despite its title, points to the importance to Victorian culture of the challenges to religious faith and the cultural centrality of increasing awareness of the limitations of mortality and human society. In 'Remembering the Victorians', we are called to reflect upon the way the Victorian image has been processed down the decades, and the value of current and popular understandings of the word 'Victorian'.

Despite its chapter titles, the volume admits at the outset to an emphasis on literary culture. This is expected, given that most interest in the Victorian period seems to be generated within North American and British departments of English literature. But there is an almost Arnoldian canon of authors' names throughout the chapters, and one does speculate about the existence of autonomous cultures within science, business, music, visual art, and so forth, and the mainly literary interpretation of culture being applied here. The term 'Victorian' is considered at length in many respects, but its specificity to Britain is not, and perhaps as a result its application in the volume seems at times parochial. Did Victorian culture cease at the British coast? How far are aspects considered in these chapters peculiar to Britain? Why should historians of other countries find Victorian history and culture relevant? In this respect, the term at times breaks down under its own (lack of) delimitation, as for instance when consideration includes authors such as Dostoevsky, Tolstoy, Ibsen, Strindberg or Proust, or when the focus turns to Empire. The initial arguments relating to the variety of approaches to Victorian Britain are valid. One is still, however, struck at times by the vastness of it all, and left searching for a sense of conclusion. The chapter on technology, for example, meanders through literary and visual impressions of factory production, social mobilisation, railways, telegraphs, phonographs, department stores, gas lights, the various guises of photography, telephones, typography and machine guns. One is reminded of accounts of visitors to the Great Exhibition, many of whom were left breathlessly speculating, as they had their packed lunches by the Crystal Fountain, as to what it was all about.

Yet the experience on reading this volume is a fascinating and thought-provoking one. The enormity of the changes Victorians were witnessing is plain to see, but so too is the change in the way witnesses recorded their accounts. One of the central messages of the volume is that the media through which Victorian culture was expressed were themselves changing radically in the face of technological, social and economic developments. The production, consumption and dissemination of culture, as well as its subject matter, are clearly demonstrated throughout the volume to be evolving. This evolution points towards the present and argues for the Victorians' modernity. It also calls into question the existence and boundaries of a Victorian 'period'. The themes of newness and surprise, on the other hand, are factors distinguishing Victorian culture. So are the particular modes of cultural expression, and, taken as a whole, its interwoven, but unravelling nature: a further theme of the book is how, in the earlier half of the nineteenth century, authors, scientists, artists, musicians and journalists crossed professional boundaries with alacrity. Towards the end of the century a greater degree of separation took place. Authors still commented on science, but they were no longer scientists themselves or even able to comprehend new scientific discoveries. Despite its mainly literary standpoint, the volume is commendable for beginning an extension of cultural discussions beyond literature pure and into areas such as economics and war. Each of the chapters makes important arguments in its own right: that on art, for example, is a logical tour de force, and makes a strong case for the reconsideration of Victorian art as belonging to artistic modernism, and in so doing overturns a long-established position dismissing it as passé or aesthetically inferior, and encouraging forcefully a renewed enthusiasm for research of this area.

It would probably be impossible for any single volume to fully satisfy as a Companion to Victorian Culture. The subject is already too vast, especially when fitted into such a manageably-proportioned book as this, and it expanding rapidly as a consequence of post-modern scholarship. Yet despite size being an issue, this book justifies its title. Indeed, as a whole and in its individual parts it exceeds it.