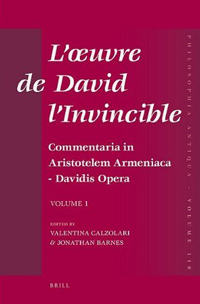 The present volume is the first in a series on the Aristotelian commentaries of David and their significance in the diffusion of Greek philosophy in Armenian and Syriac tradition. The eleven contributions stem from a conference held at Geneva in February 2004 and constitute an introduction to the planned series. Some of the authors provide useful overviews of broad areas within the field, while others present detailed analyses of particular texts. Thus Valentina Calzolari (in one of her two contributions) and Henri Hugonnard-Roche survey respectively the Armenian and Syriac traditions of philosophical and other non-theological works translated from the Greek, while six contributions are devoted to the four texts on the standard Aristotelian school corpus traditionally ascribed to David. Two contributions deal with the legacy of David and late antique philosophy in Armenian literary tradition, and the volume is introduced by an elegant article from Jonathan Barnes outlining the key features of the Alexandrian commentary tradition and the particular significance of David's works in the history of Greek philosophy in Armenia.

Both the biography of David and the authenticity of the works attributed to him remain matters of dispute, but Calzolari's introductory survey provides helpful orientation on these issues. While sceptical concerning many details in the Armenian tradition of his life and works, she presents as the current majority opinion that David was a pupil of Olympiodorus, and that the four texts on Aristotelian philosophy studied in the subsequent chapters of this volume may be ascribed to him. She notes, however, that the commentaries on the Categories and Prior Analytics are attributed by some to Elias, and that the debate continues. Hugonnard-Roche's survey on the Syriac side, when placed alongside Calzolari's, shows up some striking similarities between the two traditions (translations of Aristotle and pseudo-Aristotle, and of rhetorical and grammatical texts), as well as one highly significant difference (the absence of Plato in Syriac). In addition to many illuminating observations on the Syriac Aristotelian tradition, he notes some remarkable similarities in rhetorical method between the Armenian commentary on the Prior Analytics and the Syriac commentary by Proba. The broad similarity between the secular Greek texts extant in Armenian and Syriac versions he ascribes (cautiously) to "un corpus minimal" from a Greek model, which constituted a "bagage philosophique minimal des études savantes".

One chapter is devoted to each of the three Aristotelian treatises of David for which fairly complete texts are extant in both Greek and Armenian. In the Prolegomena philosophiae Calzolari notes some significant omissions from the Armenian version, notably a passage reflecting Aristotle's doctrine of the fifth element, but also the presence of a lengthy passage inspired by Plato's Timaeus which has been abbreviated in the Greek. In the Commentary on Porphyry's Isagoge Gohar Muradyan observes that the citations of Porphyry in the Armenian version generally but not invariably coincide with the Armenian version of the Isagoge, and points out an interesting agreement between the last part of the Armenian version of the Commentary and the Dialectica of John of Damascus. Manea Erna Sherinian rejects the Davidic authorship of the Commentary on the Categories and attributes its translation to a different hand from that or those of the previous two treatises. Three contributions deal with the Commentary on the Prior Analytics, presenting differing assessments of its relation to the Greek fragment of a commentary by Elias. Michael Papazian ascribes the authorship of the Armenian Commentary to Elias, but considers it not unreasonable to suppose that David was the Armenian translator; by contrast Aram Topchyan considers that the discrepancies between the two texts point to Davidic authorship and that the similarities derive from their common reverence for Olympiodorus; while Clive Sweating, holding that some similarities reveal a common pool of ideas whereas others verge on what moderns would term plagiarism, thinks that there could be some degree of common authorship, or that David felt free "as a sort of literary trustee" to use sections of Elias.

The most significant themes are well brought out in these careful comparisons of the Greek and Armenian texts; the most frequent to emerge is the well known question whether logic is a part or instrument of philosophy, and the issue of the appropriate place in the curriculum for its discussion. The wide scope of the volume, however, throws up some interesting questions concerning the readership of these treatises, which are not pursued further. Thus we learn from the volume that there are extant Armenian versions of the Categories and De interpretatione of Aristotle, but none of the Prior Analytics. Yet Barnes observes (5) that a commentary "feeds off another text, and it will scarcely be understood save in the company of that text." So how would an Armenian reader, we wonder, understand the Armenian Commentary on the Prior Analytics? Furthermore, we learn from Topchyan (123) that "the Hellenizing translations are usually very difficult to understand without comparison with their Greek originals." Was it therefore the case that the Armenian translations of David's works were designed only for those who were also able to consult Aristotle and David in Greek? An analogous problem exists in Syriac, where Sergius of Reshaina (died 536), like David a student at Alexandria, wrote a commentary but no translation of the Categories, and the Syriac translations of Aristotle (including the old - possibly post-Sergius - Anonymous of the Categories, to which Sergius certainly made no reference) are also very difficult to understand without comparison with the Greek originals.

The final two contributions discuss the influence of late antique Greek philosophy on later Armenian and other literature (Sen Arevshatyan) and on the History of the Armenians by Moses Khorenatsi (Albert Stepanyan). The essays are too brief to analyse in detail whether an idea should be specifically attributed to David's literary legacy or more generally to the influence of late Greek philosophy. Whether David in particular influenced al-Kindi and other Arabic philosophers on the prolegomena to philosophy (178-9) or Moses' idea of the parallel structure of the soul and the nation (Stepanyan passim) is open to debate, as these ideas could be known from a number of authors, but the general points made in these contributions are significant and instructive.

"Like almost everyone else in the history of philosophy, David was a figure of minor importance - save for one thing [...] he was translated into Armenian [... This was] something of the first importance to the development of culture and philosophy on the borders of the hellenophonic world": thus Barnes at the conclusion of his contribution. On this subject of importance this is an important book, offering a valuable insight into the present state of our knowledge, and indicating how that may be expanded by subsequent volumes in this series.