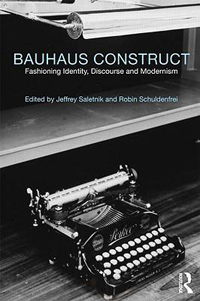 This volume is an extended compilation of papers presented at the Harvard Art Museum's March 2008 symposium, "Bauhaus Palimpsest: the Object of Discourse". With material culture studies enjoying a renewal in interest [1], Bauhaus Construct represents a timely addition to Bauhaus scholarship. It is, in the most general sense, a book about objects, or rather the fate of Kunstgewerbe, as Alina Payne laments the reluctance of scholars to critically position the Bauhaus at the end of the Kunstgewerbe tradition that began not with Gropius but with Van de Velde (259). Three primary currents of investigation organize essays by twelve contributors: "Agents", concerning the presentation of the Bauhaus through its masters and objects; "Transference", on the role of chance, exploration, and ambiguity among Bauhaus objects, and "Object Identity", concerning the interface between the Bauhaus, its artists, its objects, and their public reception and presentation.

"Agents" benefits most from Robin Schuldenfrei's chapter two, which offers a cogent analysis of the struggle inherent in reconciling art with technology, focusing on the Bauhaus' attempts to reproduce its objects. Drawing upon Walter Benjamin, she states that the failure of the objects to reach a mass market was due to the fact that they were ineluctably bound to their particular place and time. Public inaccessibility was intrinsic to their art status, either as a result of their production method - the absence of any ornament on Brandt's tea infuser that would have typically masked the shortcomings of factory production, for example - or their functionality - the production of traditional luxury objects typically found in upper class homes over those that could have been more universally used and economically manufactured. Despite the original intention that the objects be "part of an evolution from luxury to accessibility" (44), it is clear that the Bauhaus was often fighting a losing battle, with the struggle being anecdotally summed up in the erasure of the veining of a marble sink in Gropius' home in preparation for publication.

Other offerings in this section include Karen Kohler's thorough analysis of the Bauhaus through the lens of its manifesto, which she sees as a "moving object" (13) that reemerges at key points to provide a snapshot into critical junctures in the Bauhaus' history, as well as into Gropius' career. Frederic Schwartz's chapter three addresses the post World War I lack of vocabulary with which to maintain a critical discourse that would have helped to contextualize the Bauhaus, rescuing it from its "problem of anachronism" (65), while Jeffrey Saletnik's contribution discusses the correlation between the problem of Bauhaus objects' public reception and their pedagogical nature.

"Transference" marks the most significant departure from the safety net of previous scholarship in its focus on understudied material, yet it accounts for some of the more enjoyable contributions. Of these, Annie Bourneuf's article is the most salient, expanding Joseph Leo Koerner's essay on "Paul Klee and the Image of the Book" to examine the relationship between book, page and text at the Bauhaus through the lens of Paul Klee's square pictures. Charting Klee's works from Einst dem Grau der Nacht enttaucht..., in which "readability suffers to such a degree under a priori aesthetic that there is [...] no message to be read in them at all" (113), to Schaufenster für Damenunterkleidung, representing Klee's "interest in reading as a convention-governed movement of the gaze" (116), Bourneuf gives an edifying account of the implication of text in the transference from reading to seeing, as reflected through Klee's work, during the tumultuous time at the Bauhaus when the book, once a wholly private object, was turned inside out, strewn upon billboards and art canvases alike "to make reading more like looking" (108).

Paul Paret's particularly inventive examination of the photograph as both a tool of transference and a modernist object in its own right offers a rather unorthodox view into the familiar portrait taken of the stone sculpture workshop in Weimar. In a close reading of the photograph, Paret remarks on the camera's chance arrangement of the Bauhaus objects, particularly the camera's role in "undermining their autonomy and reframing them within a fantasy of architectural totality" (168). He looks at adjacencies, critical axes, obstructions, and cropping of the composition's objects to provide insight into the methodological and pedagogical conflicts in the studio. Ultimately, Paret views the photograph as a sculpture of sculptures, able to transcend its status as archival document or mere representation.

Laura Muir and Joyce Tsai provide solid contributions in this section, with the former filling a gap in scholarship on Lyonel Feininger's little-known experimental photographs which were key in developing his painting practice, and the latter examining the repair and revision of Moholy-Nagy's largely understudied ZVII, which "seems to testify, point for point, the reasons why Moholy-Nagy would eventually abandon painting in 1928" (143).

"Object Identity", the final collection of articles, runs the gamut from offering fresh perspectives on well-known Bauhaus subjects (Breuer in drag, for one) to searching for a tagline (the inclusion of Adorno's Habitus in chapter ten seems a superfluous appeal for justification, obscuring the pith of the article, which is essentially a fascinating character study of Breuer, Bayer, and Brandt as they struggle to situate their work within the public domain). Despite Adorno's presence as a fifth wheel, this is one chapter that should not be missed. In particular, Droste's description of Brandt as a woman eclipsed by her famous teapots [2] strikes an unexpectedly emotive chord rarely reached through scholarly work.

Readers interested in gender studies may appreciate Elizabeth Otto's "Designing Men", which examines gifts of photomontage given to Gropius in jest by Bayer, Moholy-Nagy, and Breuer. Probing further into these gifts, Otto posits that post World War I gender roles were still in flux. The subject matter of T'ai Smith's chapter ten overlaps somewhat with that of Droste's preceding chapter (both concern the role of the legal profession in forging the identity of both object and artist), though slight contradictions between the two indicate that the authors did not have the opportunity to remark upon the other's work. For example, while Smith acknowledges that Gropius patented his Theaterbau design in 1929 (230), Droste paints a picture of Gropius' unequivocal desire for anonymity during his career, failing to mention any exceptions that Smith cites. Here, readers may be confused as to the extent to which Gropius may have grappled with the ownership rights to his own work.

Bridging the gap between craft culture and design studies, exploring the dichotomy between object and agent, and providing new insights into classic Bauhaus texts, this is a rigorous contribution to scholarship that should be required reading for anyone interested in the Bauhaus.

[2] Ulrike Müller's recent "Bauhaus Women: Art, Handicraft, Design" (Paris 2009) paints a picture of Brandt with less melancholy, preferring to gauge her success as an artist strictly through the public reception of her objects.