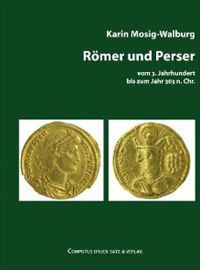 Mosig-Walburg's monograph provides a thorough analysis of the political and military relationship between the Roman and Sasanian empires from the third to the mid-fourth centuries AD. Two cornerstones of the discussion are set by the peace treaties of AD 298 and AD 363. To arrive at these, she undertakes a systematic and comprehensive investigation of the historical backgrounds of the key periods which define the era and examines the different military conflicts and wars, their causes, the courses of these wars, the terms of the respective peace negotiations, followed by a critical assessment of the results of her research. Her scholarly approach to the sources, which she subjects to a painstakingly detailed and careful analysis and critical evaluation, as well as the critical assessment of the secondary literature, which in the past has often fed on its own misinterpretations and prejudiced approaches to the sources, allow her to make a convincing case for looking at the aims of both the Roman emperors and the Sasanian kings in a more differentiated manner. As a result, the study requires us to view crucial aspects, such as the territorial demands of both empires, the importance placed on Christianity as a factor of war, and the position of Armenia, in a different light.

Nine chapters include three intellectual units: Chapters 1-3 provide a survey and analysis of the events up to the peace treaty of AD 298, chapters 4-5 look at the Roman-Sasanian conflicts from AD 298 to the 330s AD, chapters 6-8 discuss the period from Constantine I to Julian and the peace treaty of AD 363. Chapter 9 offers a conclusion of the analysis and a summary of the results. Chapter 1 sets the scene of the historical background, discussing the early Sasanian period to the peace treaty of AD 298. Here the author asserts the view already held by leading scholars in the field, that the Sasanians laid no claim to former Achaemenid territory. Rather, the conflict between Rome and the Sasanian empire was the control over the province of Mesopotamia, while the initially aggressive policy of Ardashir and Shapur on the western border was determined by their aim to gain control over northern Mesopotamia. As for Armenia, Mosig-Walburg argues that its status was not that of a Roman client state, but of an independent political unit positioned between the two empires (89).

Chapter 2 offers an intensive investigation of the war between Narse and Diocletian, followed in chapter 3 by an evaluation of the peace treaty of AD 298 from both the Persian and the Roman perspective (149-155). Mosig-Walburg clearly makes the case for the succession of Narse, following the inthronisation of Bahram III in AD 293 through the Persian noble Wahnam and Narse's aim to maintain a peaceful relationship with the Roman empire. The ensuing conflict between the two empires in AD 296 was not due to a Persian aim to expand Sassanian territories but erupted due to increasing political tensions which were mostly caused by Diocletian's eastern policy. His military policy on the eastern frontier, including armaments, point to the preparation for war against Persia, or at least were understood in this way by the Persians. Diocletian's aim was most likely to reclaim Roman territory in eastern Northmesopotamia. Galerius' defeat was followed by that of Narse in Armenia which forced Narse to enter a peace treaty, especially since his family had been taken hostage. The Romans restored their province of Mesopotamia to the earlier borders. In addition they extended their power across the Tigris. Armenia took the role of an independent power between Rome and the Sasanians.

Chapters 4 and 5 discuss the Roman-Persian relationship from the peace treaty of AD 298 to the 330s AD. Mosig-Walburg stresses that despite the unfavourable peace terms of AD 298 Shapur II kept the peace until AD 337, i.e., for almost forty years. In light of Rome's territorial advantage Shapur refrained from a military attack to reclaim the lost territories, yet Constantine's creation of a new office in AD 335 for the communication between Rome and the region across the Tigris, as well as the Roman client states at the eastern periphery of the empire (265) which reflect his concern for the strengthening of the eastern frontier, meant that Shapur felt the threat Constantine's policy posed. His request in AD 337 to re-negotiate the border territories with the emperor being rejected, Shapur declared war. However, as Constantine's hurried efforts of armament show, there is no indication that he had planned an offensive attack on Persia. Shapur II and his commander Narse were defeated. Mesopotamia remained in Roman hands, while Armenia, meanwhile, had declared its allegiance to Persia. The pro-Persian faction was probably forced to leave only when the Persians were driven out of Mesopotamia. As no solution between the pro-Persian and pro-Roman factions could be reached, a status quo ante once again left Armenia as a politically independent state between the empires (266).

The final section of chapters 6 to 8 investigates the role of religion in the policy towards Persia under Constantine I and Constantius II (chap. 6), the Persian campaign of Julian (chap. 7), and the peace treaty of AD 363 (chap. 8). Here Mosig-Walburg demonstrates that once and for all we must dismiss the idea of a Roman identity with the Persian Christians and a "crusade"-style war against the Zoroastrian Persians. This image has been fostered by the Vita Constantini of Eusebius and has widely been accepted in modern scholarship. Yet, as Mosig-Walburg argues, not only is it anachronistic to place such an antagonism in the early fourth century, but also, in light of the religious policy of the Constantine dynasty, does the idea of Christianity as an ideological weapon against the enemy not stand up to scrutiny of the sources.

Julian's Persian campaign, as Mosig-Walburg states, neither was due to attempts at achieving grandeur nor at revenge for former Persian attacks on Mesopotamia. Rather, Julian was driven by the aim to find a permanent solution to the ongoing military conflict and resolve the issue long term. This becomes evident in the peace talks of AD 358. Persian invasions of AD 359 and AD 360, in contrast, emphasise the fact the the Sasanian king continued to insist on regaining north Mesopotamian territory. Following the death of Constantine II Julian hoped to resolve the issue by taking the war into Persian territory and forcing Shapur II to accept the peace terms of AD 298. His campaign failed, and Julian's successor Jovian was forced to accept Persian terms of peace. This meant Shapur was able to restore the western frontier in Mesopotamia to the status from before AD 298 and with it he safeguarded the area. He now established a buffer zone to protect against Roman attacks on Adiabene and the access along the Tigris to Ctesiphon. Shapur thus achieved his plan of a solid defense strategy, not an aggressive military plan of expansion in which he would take control of Syria (322). The peace treaty also obliged the Romans to accept the neutrality of Armenia, more or less a confirmation of its status held after AD 298. Nevertheless, a conflict over Armenia and Iberia erupted again between Valens and Shapur II, but not because either side wanted to increase their influence over the states, but because of the internal political situation in both states in which a pro-Persian party advocated Persian intervention.

As Mosig-Walburg states in her concluding chapter, neither the idea of a weak empire following the reigns of Ardashir and Shapur, nor the idea of a continuous Persian aggression can be upheld. Equally, the wars under Narse and Shapur II cannot be taken as an indicator of an expansion policy of the Sasanians. As the study of the sources revealed, Persian and Roman military focus was on the north Mesopotamian territory. The aim was maintaining or restoring this region which gave either side a strategic advantage. Against the Roman aim of a province of Mesopotamia stood the Sasanian aim to secure the Persian position there. More importantly, in contrast to the generally held view that the Persians were the aggressors, it was predominantly the Romans who led the offensive in the third century in order to regain lost territory. In the fourth century, Shapur's aims never went beyond the restoration of the former Persian territory prior to the peace treaty of AD 298. As for Armenia, despite efforts on both sides to influence the kingdom, it maintained an undeniable independence which must be given due credit. Here, too, a thorough re-evaluation of the sources revealed that rather than identifying Armenia's political dependency on Rome, and Persian aggression in the 350s, the Armenian aristocracy and their king had more control over their political fate and their choice of political ally.

The study is complemented by a chronological table, a list of abbreviations, a bibliography, source -, personal name - and geographical indices, and two maps.

This is a well-researched and well-presented study, clearly laying out difficult and complex issues both in the sources and in the secondary literature. Its sober assessment of the primary sources forces us to adjust, if not dismiss, long-held views on several issues regarding both the Roman and the Sasanian empire, while the critical analysis of the secondary literature results in the re-evaluation of many unfounded assumptions upheld in modern scholarship. A systematic approach is maintained throughout, giving the work consistency and achieving a balanced assessment of the material. This monograph is a considerable scholarly achievement and will need to be consulted by anybody with an interest in the relationship between Persia and Rome beyond the stereotypical arguments. If a suggestion could be made, it might have been useful to provide such an important study with an English summary given the foreign language restrictions outside the German-speaking academic world. This book deserves a wide readership.