M. Shane Bjornlie: Politics and Tradition Between Rome, Ravenna and Constantinople. A Study of Cassiodorus and the Variae, 527-554, Cambridge: Cambridge University Press 2013 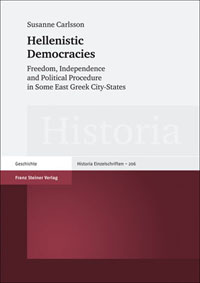 Until recently, debate on the Greek polis and on Greek democracy was entirely focused on the Classical period, typically on Athens - at least outside the French-speaking world where a number of distinguished scholars, following the example of the great epigraphist Louis Robert, has for several decades been investigating the history of Greek city-states in the period after Alexander. Within the last five years or so, the subject has slowly been coming to the fore in other countries, too, and several monographs on the topic in languages other than French have appeared. The results have not as yet been entirely satisfactory. While Sviatoslav Dimitriev, in a useful work of reference, treated the history of the Greek city-states in Hellenistic and Roman Asia Minor as one of basic institutional continuity, Volker Grieb, summarizing recent scholarship in German, argued that free Greek city-states in the period after Alexander were democracies but only if and as long as they were fully independent, thus linking the decline of Greek democracy directly to Rome's rise to hegemony in the Eastern Mediterranean. [1]

The author of the book under review, Susanne Carlsson, sides with Grieb in assuming a direct causal link between the emergence of a unipolar system of power centred on Rome and the end of popular rule in Greek city-states that, according to her, had before been both democratic and independent. And like Grieb she believes that political participation was stifled precisely because Greek city-states by that irrevocable process lost every prospect of ever again being able to conduct a foreign policy of their own. Unlike Grieb, however, she never even raises the question of how exactly these two phenomena are related; she takes it as self-evident that subjugation to a foreign power has a depressing effect on public morale - and that that is all there is to say. Even if a short review is not the place to discuss this issue further the reviewer cannot refrain from expressing his belief that a more satisfactory explanation can only be reached if internal and external factors are integrated into a complex model along the lines drawn many years ago by Philippe Gauthier in his magisterial "Les cités grecques et leurs bienfaiteurs" (Paris 1985).

Carlsson's book is structured as follows. After an introductory chapter on "Democracy then and now" (25-60) treading well-trodden ground at considerable length, she goes on to study the terms autonomia and eleutheria arriving at the (unsurprising) conclusion that their exact meaning varied according to the context in which they were used (61-99). Then follows a chapter on international relations whose relevance to the subject of the book is not entirely clear (100-148). The main part of the book consists of a study of Greek inscriptions (149-285) that is modelled on the fundamental book by David Lewis and Peter Rhodes on "The Decrees of the Greek States" (Oxford 1997). Focusing on four Greek cities in western Asia Minor that she regards as having retained the status of independence in the 3rd and 2nd centuries BC: Iasus, Calymna, Cos and Miletus (for Calymna, see below), she tries to reconstruct their modes of government by analyzing the information contained in the decrees passed by the popular assembly: prescripts, motion and enactment formulas, etc. Like her predecessors she argues that these states indeed were democracies pointing out that the word demokratia was in the 3rd century generally associated with popular rule, that no property qualifications are attested for them and that their decrees were normally passed in the name of the council and the people (or the people alone). Her main argument for denying that these states remained democracies beyond the middle of the 2nd century is that the number of inscribed decrees decreases significantly after that date. The problem with all this is not that the general picture is implausible. At present, many scholars, the reviewer included, would agree that the mid-second century really marks a water-shed in the development of Greek city-states. Problematic is the way Carlsson reaches her conclusions. First of all, it is simply not enough to extract rules of procedure from the wording of decrees when trying to assess the political character of Greek city-states; for that purpose, many more factors need to be taken into account: the whole institutional apparatus including the magistrates, but also modes of interaction, communication and self-representation, to name but a few. And the assumption that the number of inscribed decrees faithfully mirrors either the amount or the range of business dealt with by popular assemblies is seriously flawed. As has been stated many times before, in Greek city-states it was the exception rather than the rule to inscribe decrees on non-perishable materials, and many types of documents that would be particularly instructive for us were hardly ever put on stone. Counting inscriptions leads nowhere without proper consideration of the epigraphic habit.

As to the case-studies undertaken by Carlsson, Calymna seems ill chosen for her purpose since the island was absorbed by the neighbouring polis of Cos by c. 200 at the latest. This is not an example of a democratic polis turning oligarchic when subjugated to a foreign power but one of a community losing the status of polis altogether. Iasus might have served Carlsson's purpose better if only she had taken account of the research carried out by members of the university of Perugia over the last 25 years. In fact, she seems entirely unaware that excavations have brought to light so many new inscriptions that the number of decrees known has almost doubled since the publication of Wolfgang Blümel's corpus in 1985.[2] But Carlsson's statistics are faulty for other reasons, too. In the case of Cos, she alleges that only six Coan decrees yield information as to the day when they were passed and concludes from the fact that all six are dated to the first day of the month that there was only one regular meeting of the Coan assembly per month (229). In fact, however, since 2005 not six, but ten Coan decrees are known whose day date is either preserved or can be plausibly restored; and out of these, four are dated to the first day of the second half of the month.[3] This is no mere trifle if one is trying to determine the level of political activity Coans were expected to show as it proves that the Coan assembly was convened not once but twice every month. In the case of Miletus, Carlsson is positive that the lack of inscribed decrees after c. 130 coincides exactly with the formal integration of the city within the province of Asia established in 129. But contrary to her assertions there is no evidence whatsoever that Miletus really did become part of Asia at this early date and the supposed coincidence belongs to the realm of pure speculation.

A simplistic approach and insufficient familiarity with both evidence and scholarly literature are not, however, the only reasons why this book blatantly fails to make a contribution to the debate about Greek democracy in the Hellenistic period. For reasons of space a few examples must suffice to justify the assertion that the author has not succeeded in mastering the sources she tries to interpret. Her translation of one of the most common formulas to be found in honorary decrees is wrong on several counts: "We give them the right to import and export (!) freely, and in war and peace asylum (!) and without formal treaty" (159). The formula kyriou syllogou genomenou is mistranslated as "according to the assembly" (85-87), and the phrase hon/hou he polis kyria estin which refers to the fact that a city did not have full control over its revenues is misinterpreted as a way of stressing it's claim to sovereignty (77-79). The noun autodike that Carlsson derives from the rare adjective autodikos does not exist (90), and to coin a phrase like "having a demokratiai politeutai" (89) is linguistic nonsense. Time and again documents are seriously misreported. Reading through the book one comes across so many gross errors in the texts translated or quoted from Greek inscriptions that one can hardly avoid concluding that Carlsson's language skills are not up to the task she has set herself. And the fact that she cites Polybius from the English translation in the Perseus Digital Library (168), converting the place-names into Greek (with limited success), confirms this general impression of unreliability. On top of that, Carlsson's mastery of English is no better than her command of Greek (or Latin). There are countless blunders of English idiom and style, and numerous grammatical mistakes.

As the author explicitly states in the preface, this book is a "slightly shortened and revised version" of a PhD thesis examined at the university of Uppsala in May 2005. The reader is not, however, alerted to the fact that the original PhD thesis had (under the same title) already been printed in Sweden in 2005 and has been known to specialists since then. Now one might conceive of several reasons why a less than perfect PhD thesis is published essentially unrevised. It is hard, however, to find an excuse for printing it a second time five years later with all the grave shortcomings of substance and form pointed out in this review.