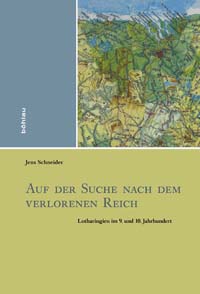 The Italian novelist Italo Calvino wrote a short story, 'Il cavaliero inesistente', about a knight in the service of Charlemagne called Agilulf, who is brave, honourable, and admirable in every way, except one - he does not actually exist. The suit of armour riding the horse is empty, there is no one inside. Jens Schneider's provocative book, based on a dissertation submitted in 2008, suggests that something similar could be said of the Frankish kingdom of Lotharingia. Yes, one of Charlemagne's descendents, King Lothar II, ruled for a dozen or so years a kingdom between the Rhine and Scheldt, Jura and North Sea, a kingdom which can for historians' convenience be labelled as 'Lotharingia', and the subject of much scholarly research; but, argues Schneider, Lotharingia never existed as a coherent space, and there never was a Lotharingian identity.

Schneider sets out to prove his point in two ways. The first is to accept Lotharingia as a 'working hypothesis', in order to measure its coherence in a number of fields identified by Frank Göttmann as the preconditions for any genuine spatial unity, namely geography and environment, population, society, behaviour and mentality, economy, and political organisation. Secondly, Schneider considers whether Lotharingia was perceived by contemporaries as a separate entity, or, in Genicot's phrase, whether it was an 'entit#233 per#231ue comme telle'. In pursuit of an answer, Schneider moves beyond the standard Latin sources - charters, chronicles, letters, and so forth - to bring into consideration vernacular texts, which might be thought privileged as windows onto contemporary consciousness, an angle which has, perhaps surprisingly, not been tried before.

Is there anything in this material to substantiate the idea of Lotharingia as meaningfully united, as having existed as such, between the mid ninth and the mid tenth century, the period on which Schneider concentrates? His answer is a nuanced but nevertheless firm no. It is true that outside writers in this period sometimes described the region as Lotharingia, but that was merely a "begriffliche Banalität" (442). In fact, the region was always fragmented geologically, economically, and politically, and transected by fault lines of settlement and even mentality, too: really, it was a collection of regions, many of which were better connected to their neighbours beyond Lotharingia than to each other. The sources that can be read for indications of self-conscious identity, and the vernacular material especially, further imply that the collective identity that prevailed within this former kingdom over the period was not Lotharingian, but simply Frankish - a traditionalism which helps explain, if explanation is really needed, why the short-lived kingdom was never truly resurrected. For Schneider, in short, the historical search for the 'lost kingdom' is doomed, because it never really existed to be lost.

Presented in this way, Schneider's case appears so self-evident that it may seem surprising to some readers that the issue merits monographic treatment; but actually, his book is startling in a historiography that takes Lotharingia's existence as a distinctive region, and one that long survived its single king, as the basis for further research. Schneider targets the clearest expression of this perspective, an equally scholarly, and equally innovative, recent book by Thomas Bauer [1], that sought to use liturgical evidence to demonstrate the continuing existence of this shadow kingdom, even up to the present day. Schneider considers Bauer's important book as flawed on methodological grounds, seeing his argument's dependence on late sources as indefensible, and the inferences Bauer draws from those sources as debatable; more fundamentally, Schneider suggests that Bauer's notion of space, on which any such study necessarily depends, is unsophisticated to the point of being misleading. Schneider certainly takes care to guard against criticism of this kind, dedicating a generous portion of the book to a sensitive and insightful discussion of the 'spatial turn', as it has affected the historiography of the Middle Ages.

That does not mean that his book is immune from criticism altogether, of course, and here a number of points could be raised. For example, the material on Otfrid of Wissembourg is fascinating, but given that Schneider convincingly demonstrates that Wissembourg was never part of Lothar II's kingdom, necessarily tangential. The charter material, tabulated in useful appendices, is handled a little brusquely, with those awkward documents that do not support his case labelled as suspicious and possibly interpolated (though in fairness, it must be admitted that like much early medieval diplomatic material, they are often only preserved in later copies). Whether the density of ecclesiastical communities can really serve as an index of settlement density better than, say, archaeological evidence - which has an oddly low profile throughout - could be questioned. Regino of Prüm's gloomy thoughts, in the late ninth century, on Lotharingia as a kingdom marked out by God as a consequence of King Lothar's II disastrous divorce would surely have repaid more attention (though they need not have presented an insuperable problem for Schneider's argument).

The book can also feel, at times, a little disconnected, bursting with good ideas on issues from dukes and forests to Frisian identity and Charles the Fat's adoption plans, that are only imperfectly fused together. But this is double-edged criticism, since it also bears witness to the book's impressive scale of ambition and originality. Overall, Schneider offers a powerful and critical appraisal of the shortcomings of much of the historiography centred on Lotharingian identity - an appraisal perhaps applicable to the occasionally slightly woolly work on medieval identity more widely - and historians working in this field will have to take his critique on board. He is surely right to identify a certain complacent circularity of argument prevalent in much research, and a slight reluctance to ask the really difficult questions that any work on identity should entail, a reluctance that this book assuredly does not share.

Schneider also provides an explanation for why this will probably not be the last word on the topic, implying, towards the end, that all the historical attention devoted to medieval Lotharingia in recent years reflects the area's centrality as a more recent European 'site of memory', evocatively redolent of fading industrialism, world war, and lost possibilities. To the extent that this 'lost kingdom' is quietly taking on a sort of semi-mythic centrality in contemporary European consciousness, we may confidently expect more research on this subject, in spite of Schneider's broadside: nevertheless, that research will need to engage thoroughly with this brilliantly wide-ranging and stimulating piece of work.