Carsten Hjort Lange: Triumphs in the Age of Civil War. The Late Republic and the Adaptability of Triumphal Tradition, London: Bloomsbury 2016 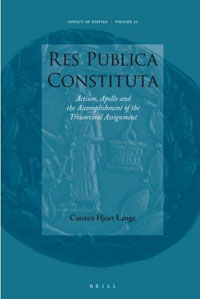 This book, a revision of Lange's doctoral thesis submitted to the University of Nottingham, is a historical analysis of the ideological claims made by Octavian/Augustus as he rose to power through the triumviral period until the so-called first settlement in January, 27 B.C.E. Lange focuses on a "nexus of Actium, Apollo, civil war and peace" (2) that centers on the triumviral assignment. This "nexus" provides the points of intersection and recurring themes in a book that otherwise has a roughly chronological arrangement. Chapter 1 focuses on the establishment of the triumvirate and the ideology of Octavian down to Naulochus in 36 B.C.E.; chapter 2 discusses the run-up to war against Antony and Cleopatra; the portrayal of the decisive conflicts of the war, Actium and Alexandria, in the primary sources is the subject of chapter 3; chapter 4 examines the on-site commemoration of the battle of Actium; chapter 5 focuses on the honors accorded Octavian before he returned to Rome; and chapter 6 analyzes the period between Octavian's return to Rome and the conferral of the title of Augustus (29-27 B.C.E.).

A focal point of the book, as its subtitle suggests, is what Lange calls the "triumviral assignment." Defining precisely what this assignment was is no easy task, and the vague language that appears in inscriptions and coin legends to describe it is not very helpful: tresviri rei publicae constituendae. Lange suggests that "constituting" the Republic initially involved the prosecution of the civil war against the conspirators and the distribution of the provinces (19-23). The second term, commencing in 37 B.C.E., combined civil war (Octavian's campaign against Sextus Pompeius) with foreign conquest (Antony's Parthian campaign). Since in Lange's estimation the triumviral assignment involved the prosecution of civil wars (culminating in Philippi and Naulochus and finally Actium), it is not surprising that the completion of the assignment coincides with the end of the civil wars. The importance of civil war in Augustan ideology is reflected in the very structure of the Res Gestae, which begins (2) and ends with civil war (34.1) (185).

Lange's definition of the triumviral assignment strikes me as too narrow. "Constituting the Republic," in my view, should have included what we might term domestic affairs, such as presiding over the senate and elections of magistrates, as well as the promulgation of laws. To be sure, whatever the original triumviral assignment might have been, events show that flexibility was possible, perhaps even necessary. Octavian, for instance, prosecuted the Perusine war in 41-40 B.C.E. against Lucius Antonius and Fulvia, and later settled affairs in Illyricum, winning enough of a victory there to merit a triumph. Neither of these campaigns was part of the original triumviral assignment, according to Lange (judging by his silence on the matter). Similarly, Lange claims that Actium was part of the triumviral assignment (82), even though neither Antony nor Octavian could have anticipated it when they renewed the triumvirate in 37 B.C.E. (Lange himself claims that Actium was not inevitable [70]).

Another important aspect of Lange's ideological "nexus" is Actium. The scholarly consensus on the run-up to Actium holds that Octavian emphasized the campaign as a foreign war not a civil war (73). In fact, Lange argues, Octavian never denied that Actium was both a civil and foreign war, citing first and foremost RG 34.1, which refers to the Augustan settlement in 28-27 B.C.E.: in consulatu sexto et septimo, postquam bella civilia extinxeram [...]. Lange claims that this line refers only to Actium and hence to the successful completion of the triumviral assignment (82). But Augustus clearly uses the plural here (bella civilian) and must be thinking of all the civil wars he prosecuted in his career, not just Actium. Suetonius is more explicit [Aug. 9]: bella civilia quinque gessit: Mutinense, Philippense, Perusinum, Siculum, Actiacum. If these are the wars that Augustus has in mind in RG 34.1, it weakens Lange's argument, since Suetonius includes at least one civil war (Mutina) that could not have been part of the triumviral assignment, as Lange has defined it. The Res Gestae is essential evidence for understanding Augustus' ideological claims, as Lange recognizes (8), but it must be acknowledged that Augustus begins the narrative of his political career in this document with his recruitment of two legions in the fall of 44 B.C.E. (1.1), a full year before the triumvirate was established.

Lange finds other evidence to underscore the importance of the battle of Actium in Augustus' ideology. Octavian celebrated this battle as one of the three victories of his triple triumph in August, 29 B.C.E. The fact that the Actian triumph was the middle of the three does not mean that Augustus was attempting to downplay it, but rather the three triumphs followed the chronology of the three campaigns that Octavian fought. Moreover, if Octavian had really wanted to downplay Actium, and thus obscure the battle that was a civil war (in the minds of other scholars), he needn't have included it in his triumph at all. Actium and Alexandria, in some ways, were part of the same campaign (certainly the enemies were the same in both), and therefore, it would have been appropriate to celebrate them both in the same triumph. Obviously, the fact that Octavian chose to have separate processions for each indicates that he viewed them as separate campaigns.

Scholars have long recognized the importance of Apollo to Augustan ideology, but it is not clear when the relationship was established. Certainly, by 36 B.C.E. after Naulochus, Octavian declared an area on the Palatine as sacred to Apollo (40), which later housed this god's temple. Lange points to an earlier date for the establishment of this relationship, citing Vergil's Fourth Eclogue (tuus iam regnat Apollo [10]), the story of Augustus' divine birth (Epigrammata Bobiensia 39), and the feast of the twelve gods at which Octavian came dressed as Apollo (Suet. Aug. 70.1-2). Ultimately, Lange would like to trace the relationship back to Octavian's (Octavius') sojourn in Apollonia (the city of Apollo) in 44 B.C.E., when he learned of Caesar's assassination (46; 192). Evidence is suggestive but, as Lange admits, not conclusive.

Lange is on firmer ground in his discussion of the new victory city founded by Octavian near the site of Actium, and his discussion in chapter 4 is illuminating. Apollo was already connected to Actium, but he received a new temple with games in his honor (104-6). Most interesting of all is the victory monument with a statue base showing Apollo playing his lyre (a god of peace) with eleven other gods and a triumphal relief depicting Octavian in his quadriga (106-11). The inscription on the monument, interestingly, is in Latin, showing that it was a Roman monument in an otherwise Greek context (116-17), and referenced the peace that his victory had wrought (pace parta terra marique [109-11]).

Back in Rome, the topography of the city was transformed, and many new monuments commemorated Octavian's victories (160-66). But the emphasis, as Lange is quick to point out, is on the peace that resulted from his victories. In particular, Apollo Palatinus became a god of peace instead of a god of war (which we already see in the representation of Apollo at Nicopolis). This further underscored the successful conclusion of the triumviral assignment. Additionally, Lange argues, the closing of the temple of Janus as symbolic of peace was perhaps an invention of Augustus (140-44).

What makes this book at times a frustrating read is the large number of typographical errors, grammatical errors, and infelicities of style. It would have benefited from a much heavier editorial hand. Even more frustrating at times is a lack of clarity of expression; one example (not a solitary one) will have to suffice. What follows are the concluding remarks to a section on the Feriae that were established to commemorate Augustus' victories at Actium and Alexandria (134):

"Thus the Alexandrian festival continued to have great importance in the calendar, while Actium's association with Augustus' birthday in fact had the consequence that the battle itself came to have somewhat less significance in calendar terms. However, at the outset, although both victories enjoyed calendrical celebration, it was Actium which had pride of place, through its double celebration and its linkage with the imperial birthday itself."

Viewing the triumviral period, as Lange does, through the nexus of the triumviral assignment, civil war, peace, Actium, and Apollo elucidates connections that otherwise might be obscured. A major strength of the book is the author's knowledge of the primary evidence, which shows he is equally at home with the major historical sources (Dio, Appian, Suetonius) as he is with the Augustan poets. He also performs an important service by bringing to a larger audience the results of recent excavations at Nicopolis. It would have been helpful, however, to have visual representations of some of this material evidence (the book includes only a map of the site of Actium and its environs). Still, Lange provides a fresh perspective on a period of history that has received its fair share of scholarly attention.