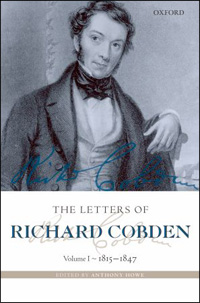 The repeal of Corn Laws, insisted Richard Cobden in a famous letter to the Tory Premier, Robert Peel, meant that henceforth Britain would have to be governed by 'the bone fide representatives of the middle classes'. 'The Reform Bill decreed it', he wrote, 'the passing of the Corn Bill has realized it'. Penned on 23 June 1846, this letter was perhaps one the most perspicacious statements of the first half of the nineteenth century, heralding, as it did, the claim of the provincial manufactures and merchants to a place in the corridors of power. Unfortunately Cobden's letter does not appear in this collection of his correspondence between 1815 and 1847. Instead, on this important day, it includes a note from the House of Commons arranging a morning tea of fruit and bread and butter with twenty-year old Jane Leaf.

Selection is a task that bedevils all historians. In this case the editor, Anthony Howe, has been confronted with the thankless task of selecting 378 letters from the more than 1600 that Cobden was known to have written over the course of more than thirty years. Howe is an excellent scholar who has lavished more care attention of the life of Richard Cobden than anyone since his late nineteenth-century biographer, John Morley. Constraints of space - the volume is already a weighty tome of 529 pages - have meant that Howe has been able to present less than a quarter of Cobden's output which, in turn, has led to strict rules governing the selection process. Cobden's declaration to Peel has been omitted because it has been previously published; his fruity dalliance has not. Howe must have been sorely tempted to make an exception in this case (even though the letter to Jane is, we are told, part of his personal collection). Perhaps Howe is aware of other instances that, taken together, would have made his overall task impossible. More difficult to understand is Howe's failure to draw attention to the problem in this case; the Cobden's letter to Peel is only referred to in a footnote nearly 500 pages earlier.

In the broader scheme of things however this is minor quibble about what is stunning achievement. The first of four projected volumes this collection of Cobden's correspondence is a rich and expansive archive that provides new insight into the mind of one the Britain's most important liberal thinkers of the nineteenth-century. Instead of homo economicus these letters (such at the note to Jane) reveal a human side to Cobden: funny, afraid, loving, scheming, warm, determined. We are also treated to his private thoughts on a vast range of subjects from literature to international affairs. At times he was particularly interested in Europe and America and not surprisingly his life was punctuated by extensive tours abroad.

Take Germany as an example. Cobden was fascinated by Germany telling one correspondent in 1841 that if he was 'to leave England that would be the country of my adoption' (218) and urging one of his closest allies to extend a visit there. Cobden himself had first visited Germany in 1838 undertaking a two-month tour that included Hamburg, Berlin, Potsdam, Leipzig, Chemnitz and Dresden.

His impressions will be of great interest to German scholars. Recognizing Prussia as a 'rising' state, he attributed its future 'greatness' to the commercial league that it headed. 'I predict that at some future day the men who devised that grand scheme for uniting Germany', he told his brother Frederick, will be 'reverenced like their Prussian hero Fritz' (137-8). Placing finance ministers alongside Frederick the Great was an indication of the importance he attributed to economics even though, at this stage, he recognized that Prussia 'has been playing a game; - she is said to be two millions of dollars a year out of pocket by her office...' However, the 'effect of the league', he continued, 'must inevitably be to throw the preponderating influence over 30 millions of people into the hands of the cabinet of Berlin'. He recognized a sage investment when he saw one. Germany is substantially 'one nation now', he wrote: 'There are heads in Berlin which have well reflected upon this, &, their measures will not disappoint their country' (138).

Cobden's was also full of admiration for the government of Prussia in more general terms: 'I very much suspect that at present, for the great mass of people, Prussia possesses the best government in Europe' (138). The government, he observed, is 'the mildest phase in which absolutism ever presented itself' where 'talent is indispensible to political or social rank' and 'Public opinion is as powerful...as it is in the Untied States'. Cobden was particularly impressed by the fact that there were 'thousands of learned men who continually pass from the German Universities...into official and government appointments...' (139). The Prussian meritocracy, he continued, was inspired from the very top. The king (Frederick William III) was a 'good & just man'; his 'heir apparent' (the later Frederick IV) 'possesses more talent than his father...a heart just as rightly disposed' to the 'spirit of the age'.

Cobden contrasted Prussia with his homeland that was labouring under the 'the great juggle of "English Constitution" - a thing of monopolies - & church craft - & sinecures - armorial - hocus pocus - primogeniture - & pageantry! 'This critique of Britain in 1838 is a familiar one from the mouth of a man who was known as a reformer; his response to his own charge however, is remarkable: 'I would gladly give up my taste for talking politics to secure such a state of things in England. Had our people such a simple & economical government; so deeply imbued with justice to all, and aiming so constantly to elevate mentally and morally its population, how much better would it be for the twelve or fifteen millions in the British empire, who while they possess no electoral rights are yet persuaded they are free men...'

Nor was his enthusiastic admiration confined to Prussia; in Saxony, he wrote, 'I find all these characteristics still more strongly exhibited...' Moreover, 'The Saxons are developing and extraordinary industry - They export a million & a half of stockings a year - in hand fabrics of every kind they are our formidable rivals; & they are putting up mills upon their numerous streams of water throughout the Kingdom...' (139).

From this example Cobden was steeled into action, determined to give a public lecture on the Corn Laws that he believed hampered the ability of British industry to compete with Europe: 'I have some ammunition that must be discharged. England & the English will be pulverized to supply grist to the mills of those scoundrelly oligarchs whig & tory that grind them!' (139). Cobden was not the only person prompted into action; co-incidentally on the day prior to Cobden's letter a small group of Manchester group of liberal reformers met the form the Manchester Anti-Corn Law Association, the forerunner of the League that would become an unstoppable engine of political warfare and catapult Cobden onto the national stage as its most prominent leader.

On top of this co-incidence is an irony that is worth noting. When Johann Kohl, a German merchant, visited the headquarters of the Anti-Corn Law League in the early 1840s at the height of its campaign to bludgeon the national government into submission by what was known as 'pressure from without' he marveled that men such as Cobden were allowed to continue their activities. In Germany, he mused, they would be speedily imprisoned as dangerous enemies of the State.

The fact that Howe's wonderful collection allows readers to explore Cobden's views and activities in such depth is a testament to its enduring value to scholars unable to labour over the massive archive of original documents. Painstakingly transcribed and meticulously annotated this volume whets the appetite for the subsequent volumes.