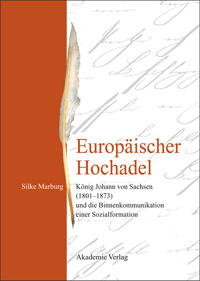 The royal correspondents were nothing if not dutiful. Every Tuesday afternoon a letter would reach Saxon King Johann in Dresden from his daughter Elizabeth, Duchess of Genoa. She would have written it in Turin the preceding Wednesday. Johann would reply to this letter the next day, so that his letter would reach Turin the following Tuesday. A third correspondent, Queen Amalie, usually wrote to her daughter on Sundays, the letter arriving late that week. Elizabeth would reply on Friday and her news would reach her mother the following Wednesday or Thursday. Thus a two-week cycle of intensive correspondence unfolded, providing the principal source for this intelligent, original study by Silke Marburg. Postal interruptions might disturb this rhythm, but the bulk of evidence was not much diminished, considering that Elizabeth also corresponded with her siblings: the princesses Sidonie, Anna, Margaretha, and Sophie, and Prince George (who would briefly occupy the Wettin throne in 1902-4). The repository for this remarkable collection - more than 1,000 letters - is the Archivio Arcivesovile di Torino.

Silke Marburg has contributed for many years to historians' growing interest in the history of Germany's and Europe's nobilities. Like Heinz Reif and Eckart Conze for Prussia and Germany, and like Josef Matzerath for Saxony, Marburg has helped dispel the taint of anachronism attached not just to their subjects but to the kinds of history that take their roles and experiences seriously. After social historians focused for decades on workers and the bourgeoisies of Germany and Europe, the nobility was not something that demanded urgent attention. Their lives were lived largely in isolation from the "little people" and the "movers and shakers" of society. Even more recent developments in the guild did not seem well suited to the study of royal families and their courts. The history of experience, of perception, of communication, like transnational history and entangled history, seemed ill-equipped to deal with families and institutions so obviously on the wrong side of "modernity." It remained difficult to interest young scholars and their students in a subject, and an era, that seemed to end with such a thud in 1918.

Though not the first to do so, Marburg considers German nobilities as a social formation, one that depended on independence and exclusivity, despite the pressures of industrial capitalism, national formation, democratization, and increasingly fine social layering. Hence it would be too much to say that cultural history has by-passed European nobilities entirely. Nevertheless, the "interior communication" that Marburg reads from her sources demonstrates convincingly that the House of Wettin - a standesgemäß fortress - survived assaults on its privilege, power, and pretention. This, then, is not another tale of aristocratic woe. However, Marburg is careful not to let the pendulum swing too far in the other direction. That this social formation survived in part as an Erinnerungsgruppe suggests that attempts by Johann and his family, first to preserve the social boundaries that set them apart and, second, to protect the outposts of power that gave them dynastic legitimacy, grew more vulnerable over time.

Marburg's analysis focuses on the Wettin dynasty's self-presentation through dynastic performance, through its communication and visitations with other ruling families of Europe, and through its strategic marriage alliances. If these topics sound familiar to this historical genre, they are. But Marburg's study is rounded out with new and interesting discussions, for instance pairing the textual analysis of royal correspondence with the writers' own uncertainty about whether their letters were being read by third parties while underway between Dresden and Turin. Likewise, Johann was hardly alone in believing he ruled by the grace of God, but his genuine piety and sense of duty come alive in Marburg's analysis. Johann's marriage calculations, treated in the last section of the book, look much less cynical when placed against the preceding backdrops of life in the royal residence, royal visits, and face-to-face communication as "experiences of social belonging." Along the way Marburg is able to put to rest the notion that King Johann numbered among those German princes whose lifestyle and outlook became bürgerlich in the course of the century.

The short title Europäischer Hochadel signals a comprehensiveness that the actual analysis may not warrant and constraints that should not be overlooked. First, this book must be considered in the context of other works about the Saxon and German nobility. The title and time-span of Stephan Malinowski's book, Vom König zum Führer. Sozialer Niedergang und politische Radikalisierung im deutschen Adel zwischen Kaiserreich und NS-Staat (2004), indicate why Marburg's study will complement but hardly displace other ambitious works. Second, Marburg's reliance on royal letter-writers is opportune but limiting. When Johann took his show on the road, Marburg is silent. Thus we learn nothing about Johann's fears for his throne or his smaller Heimat during his peregrinations between June and November 1866, when the Prussians occupied Saxony. Third, this book cannot claim to be pan-European, and it is limited to the decades of intensive correspondence between Johann and Elizabeth, 1850-1873. As a result, it cannot offer the inter- and transnational perspective on monarchical visitations in Johannes Paulmann's Pomp und Politik (2000). Nor can it take up arguments posed for earlier and later periods by such authors as Robert M. Berdahl and Martin Kohlrausch, or even for the mid-nineteenth century, as in the case of Abigail Green - all of whose books are absent from Marburg's bibliography. Berdahl's Politics of the Prussian Nobility (1988) might have been useful in exploring the monarch's idea of a blended fatherly role, for his family and for his territory. Kohlrausch's Der Monarch im Skandal (2005) might have prompted Marburg to consider the Wettin dynasty's allergic reactions to any whiff of scandal - a subject on which Frank Bösch and John Röhl have much to say as well. And reference to Green's pioneering book Fatherlands (2001) could have underpinned Marburg's argument about how well nineteenth-century monarchs used dynastic ritual, and much else besides, to reinforce their legitimacy in an era of state-building and nationhood.

These quibbles do not point to unfulfilled promises by the author but instead suggest her ability to stimulate further research through an innovative and well-crafted study of one German dynasty. Europäischer Hochadel blends histories of Saxony and Germany, of nobilities and dynasties, of social formation and self-perception, of symbolic performance and communication. It whets rather than satisfies the appetite of political historians; but social and cultural historians will find more food for thought in this impressive work than they might imagine. It deserves praise for crossing many boundaries, except, perhaps, the most unyielding national ones.