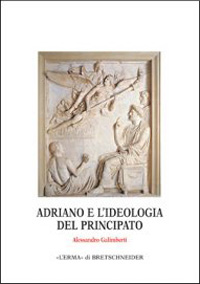 This compact book aims to discern Hadrian's ideology during his rule from 117 to 138 CE. Galimberti turns primarily to the ancient literary sources but also documents, supplementing them with information gathered from a careful and up-to-date bibliography with works in all modern languages. After a brief review of recent scholarship, Galimberti turns to seven different topics: Hadrian's advent to power (Ch. 1), his arrangements for the succession after him (Ch. 2), his interactions with the senate (Ch. 3), foreign relations (Ch. 4), his interaction with the military (Ch. 5), religion (Ch. 6), and cultural and intellectual matters (Ch. 7). He concludes with eight pages of summary. He argues that Hadrian was an autocrat who decisively broke the Republican (pro-senatorial) façade of Augustus' Principate so as to work closely with an imperial court; that he was committed to a dynastic policy and came to the throne through his bloodlines; that he should not be blamed for breaking with Rome's traditional imperialism, since consolidation had been initiated by Trajan and Augustus had formulated the goal of "remaining within boundaries"; that in religious matters Hadrian promoted Hellenism and Roman traditionalism so as to unify the empire; and that he was not as confrontational with intellectuals as usually thought, but rather cultivated such individuals, especially from the Greek East, so as to co-opt them into the ruling elite and his imperial court.

Galimberti takes his starting point from A. R. Birley's admission in Hadrian: the Restless Emperor (1997, xiv), that Birley had abandoned planned "chapters on 'Hadrianic policy', financial, military, religious, legal, 'administrative'". Galimberti aims to fill the lacuna by offering a "political interpretation of Hadrian's Principate" and by "ascertaining, through the analysis of the most significant events, what was the strategy followed by the princeps in his rule" ("un'interpretazione politica del principato adrianeo... accertare, attraverso l'analisi degli avvenimenti più significativi, quale fosse la strategia perseguita dal principe nel suo governo", 12-13). Within each chapter Galimberti works chronologically. But his aims and title beg important questions that he does not attend to. What or who determines an event's significance? What is his definition of "ideology" - simply political "strategy"? A comprehensive vision? A way in which individuals in a society perceive and formulate the relationships in which they participate? Furthermore, is it possible to discern one "strategy" or "policy" for Hadrian's 21-year rule? Not only do the ancient sources concur in emphasizing this emperor's many contradictions (e.g., Epit. De Caes. 14.6; HA, Hadr. 14.11), but one powerful school of thought sees Roman emperors as basically reactive rather than proactive. [1] Birley himself cast doubt on the reality of 'Hadrianic policy' by using quotation marks around the phrase quoted above (also, e.g., Birley 1997, 359 n18).

Galimberti composes a thick narrative centered on Hadrian. The literary sources, and inscriptions, laws, and papyri, are meticulously cited and translated; footnotes are used rather than more inconvenient endnotes. The last 25 years have witnessed a veritable explosion of scholarship on Hadrian and his times, and Galimberti uses much of this work (although avoiding questions about the Roman economy, 13). He adduces coins but rarely and historical relief and material culture even more infrequently, despite the importance of both types of evidence to the promotion, maintenance, and understanding of ideology in the Roman world. (His cover illustration, the Apotheosis of Sabina in Rome's Palazzo dei Conservatori, is not referred to and it is identified wrongly as from the frieze of the Hadrianeum.) The book includes no maps or illustrations, although Galimberti holds that Hadrian's absence from Rome during his voyages and when in the Villa Tiburtina is part of the complexity and novelty of Hadrian's Principate (13). (A more recent investigation similarly looks to Hadrian's ideology and wide-ranging policies but turns much more frequently to material culture of all types [2]. Opper, incidentally, comes to different conclusions than does Galimberti about Hadrian's philhellenism and his consolidation of the empire.)

Galimberti's general methodology is to assemble the pertinent sources, tease out correspondences and contradictions, and harmonize the evidence by explaining away contradictions. Because this study relies so heavily on the literary sources, more should be done to evaluate the various authors at the start. [3] He often takes a source at face value, such as the clearly tendentious assertion by Justin Martyr, Apol. 31.6, that Bar Kokhbar tortured Christians who would not join the Third Jewish Revolt (148-50). But Galimberti spends his opening pages on the uniqueness of his book.

For the most part he applies his own logic when dealing with inconsistencies. He notes, for example (84-85), the contradiction of Cassius Dio (69.12.1) and Eusebius (HE 4.6.4) about the foundation of Colonia Aelia Capitolina: the former says it was one cause of the Third Jewish Revolt that broke out in 132, but the latter, one result of the revolt's suppression in 135. Arguing that in 130 Hadrian had begun to urbanize Judaea (supported by reference to coins from 130 that celebrate Aelia Capitolina, as well as to scholars including B. Isaac [4]), Galimberti concludes that Cassius Dio was referring to the beginning of the transformation of Jerusalem into Aelia Capitolina in 130 (or even simply the intent to build the new city), and Eusebius to the completion of the project. This point is generally accepted. [5] But Galimberti does not explore the significance for his argument of the different dates. Another common tool is the characterization of a source (or a particular passage) as pro-senatorial or pro-Hadrian; although commonly used in source evaluation in Roman imperial history, this has the further point for Galimberti of underscoring the assertion of Hadrian's autocracy.

The book has strengths and weaknesses. Overall, the author deftly winds his way through the many sources he amalgamates. Indeed, any one wishing to locate all the literary and documentary sources on a Hadrianic topic covered by Galimberti will find here the original texts and their (Italian) translations, although the book lacks an index locorum. Typos are few, and the writing is clear. Galimberti's interpretation of individual points may convince some but not others - I find unpersuasive, for example, his speculation that family ties to Marcus Aurelius (through Hadrian's mother) were behind Hadrian's machinations for his own successors (33-34; 43-44). More importantly, however, is that Galimberti's emphasis on harmonizing discrepancies obscures wider questions. If he is right in arguing for Hadrian's autocracy, for example, how does it differ from that of Domitian, and why were their fates different? How did Hadrian's concentration of power in the hands of the emperor impact the subsequent Antonine age? How did the vast mass of individuals within Rome's far-flung Roman world - not only the tiny fraction forming Rome's elites - react to Hadrian's "ideology", if indeed they perceived it at all? These and other important questions remain unasked as Galimberti focuses on the texts. Thus I left the book impressed by Galimberti's command of the ancient written sources, but longing for more insight into the workings of ideology and government during Hadrian's rule.

[1] F. Millar: The Emperor in the Roman World, 1977; not directly addressed by Galimberti.