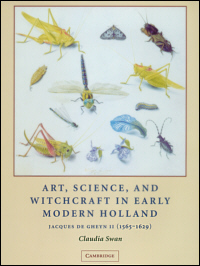 Claudia Swan's fascinating study is one of several significant books concerning the visual representation of witchcraft in European art published in recent years. [1] Swan endeavours to make sense of the remarkably diverse and enigmatic oeuvre of the Dutch painter and printmaker Jacques de Gheyn II, exploring the way his interest in witchcraft mirrors contemporary scientific and philosophical discourse, and how his artistic production oscillates between the poles of a scientific naturalism rooted in early modern descriptive science and a fantastic imagery derived from theories of the imagination and creativity.

At the heart of the book is a double-sided sheet of sketches executed by Jacques de Gheyn c. 1603. On one side (Study of Hermit Crab and Witches) one sees depicted a trio of hybrid creatures huddled together, another hybrid being, a naked woman with flowing hair, and a coloured, beautifully executed and life-like hermit crab. On the verso (Figures on a Beach) are vivid sketches of men and women - walking, seated, conversing. Swan draws on Karel van Mander's distinction between works executed from life (naer het leven) and those done from the mind or spirit (uyt den gheest) to explain this dichotomy. On one side is closely observed nature, the detailed representation of the world of flowers, insects, fishes and crabs, a world of scientific observation and discovery, works of art made from life. On the other is the realm of the fantastic, of curious and foreboding creatures, the world of fertile imagination, works of art from the mind or spirit.

Swan begins and ends her book reflecting on the peculiar drawings depicted on this sheet. The two sides articulate the polarity at the heart of de Gheyn's work - scientific naturalism and creative imagination; and they also provide a model for the book's two-part structure - an analysis of de Gheyn's representation of nature in Part I, and the relationship between early modern representations of witchcraft and demonological theories of the imagination in Part II. Through wonderfully evocative descriptions and deft analyses, Swan demonstrates the interaction in de Gheyn's work between image production and the concerns of empirical science, between theories of the imagination and artistic creativity.

In chapter two Swan demonstrates how de Gheyn's concern for working 'from the life', exemplified in the Lugt Album of watercolours of the natural world of flowers and insects, illustrates his new-found interest in painting, his close connexion with members of the university community in Leiden, and his participation in what Swan argues was a broad international engagement with visual images done from life, that included scholars such as the Bolognese naturalist Ulrisse Alfrovandi. She shows at the same time how de Gheyn subverted the expectations pertaining to the historically specific mode of drawing 'from the life' through his own fictional interventions - his technical virtuosity and techniques of framing. The images in the Lugt Album do not simply represent nature; they communicate the artistry of nature. So while upholding the common understanding of the opposition between art and nature, de Gheyn also points to their frequent interaction and exchange. The theme is carried through into chapter three, which describes how de Gheyn's drawing of a blowfish relates to a concern for classification and schematic grids, by which contemporaries in the Leiden University's botanical schools, such as Carolus Clusius, organised their experience of the natural world.

In the second part of the book Swan explores aspects of early modern demonology represented in de Gheyn's images. She shows how these images depended on contemporary demonological theories of the deluded imagination as the source of witchcraft belief; and argues that artists' frequent choice of these subjects was based on their capacity to facilitate the exercise of the imagination. In this respect Swan is sharply at odds with the way historians have tended to understand and also use such images - as visual representations of witchcraft beliefs. She does not deny that there is indeed a relationship between these images and the historical beliefs elaborated in literary and judicial sources - indeed she provides much evidence for such a relationship in arguing for the influence of Reginald Scot on de Gheyn's images of witchcraft. But her particular project lies more in elucidating how de Gheyn's images give expression to the pictorial basis of the human imagination and how they represent visual forms of imaginative illusion.

One of the most compelling chapters for the history of witchcraft discourse is chapter five. There Swan shows how the part played by melancholia in producing mental images of witchcraft in troubled minds, as argued both by the Netherlands medical establishment and by witchcraft sceptics such as Johann Weyer and Reginald Scot, was in part dependent upon theories of image production linked to the phantasia of the artistic imagination. Key figures in this cultural exchange were Thomas Basson and his son Govert, Jacques de Gheyn's brother in law, who translated Scot's 1587 treatise, The Discoverie of Witchcraft, during the early years of the seventeenth century, and had it published in Leiden in 1609. These were precisely the years when de Gheyn was creating his witchcraft scenes. Moreover, other Dutch scholars and jurists like Arnoldus Buchelius were also putting forward arguments similar to those of Weyer, who saw the origins of witchcraft both in the condition of melancholy and a blindness caused by diabolical illusion.

By linking de Gheyn's images to the work of other artists who preceded or followed him, Swan suggests that the parallels between demonological and artistic theories of the imagination are far more widespread than is generally believed. Indeed, Swan even argues that theories of melancholia allowed many to see witchcraft for what it was, an image or figment of a troubled imagination, a phantasma. She concludes that the images of artists like de Gheyn need to be understood as sceptical rather realist renderings of the witchcraft, as figures of the imagination whose reality images of witchcraft were meant to deny, and even possibly dispel.

Swan's book is an intellectual tour de force that raises numerous fundamental questions about the supposed empiricism of early modern natural history and how it coexisted with the wondrous and supernatural. For those primarily interested in witchcraft imagery and discourse, it demonstrates the critical role understandings of the imagination have in the elaboration of witchcraft images and witchcraft theory. Swan is no doubt correct in expressing the need for a much closer and also broader consideration of the role of the imagination for the understanding of witchcraft in both literary and visual representation. But perhaps because of the spatial limitations created by a book that sometimes seems to constitute two different studies, the differences between a naturally and a diabolically induced imagination are not fully elaborated. There is a tendency to conflate Weyer and Scot, and their different followers, on account of their common appeal to melancholy. In the case of Weyer, and also earlier writers such as Johann Geiler and also Paulus Frisius, diabolically induced witchcraft does not necessarily signify scepticism about witchcraft as such. And the long history of the role of the imagination in understanding witchcraft - taking us back through Geiler, as Swan rightly argues, to the Waldensian witches of the fifteenth century and beyond, and in the case of the story which the Geiler woodcut attempted to illustrate, to Johann Nider in the 1430s - is a little underplayed. Indeed it is possibly the tendency to link interest in imaginative illusion with the scepticism of Scot, which leads to the mistaken claim that Weyer's work was only illustrated with a titlepage woodcut in the 1586 edition, when the illustration had already been used twenty years earlier in 1566, and similar scenes had been included in other earlier works.

Swan's study has successfully marked out this critical area for further research. It has also brought a new level of nuance and sophistication to the way we read images of witchcraft. Historians and art historians will no longer be able to presume that visual depictions of witchcraft automatically depict the beliefs or practices articulated in a written source. But most of all, the study has provided us with rich new insight into the curious and also fascinating imagery of Jacques de Gheyn, and the ways it bridges and brings together the worlds of naturalism and fantasy, of mimesis and imagination.