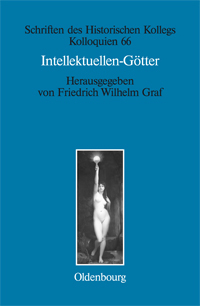 This volume is the product of a colloquium held in May 2004 in Munich under the title 'Intellektuellen-Götter. Das religiöse Laboratorium der klassischen Moderne'. It consists of eight articles which, in one way or another, explore how intellectuals investigated and contested 'the religious space' in modernity - and still do. Modernity has its locus, in a loose manner, for this purpose, in the situation around 1900, but that is only a chronological jumping off point for a wider exploration. The collection has a twofold focus. On the one hand, the contributors are all concerned with the definition and self-understanding of 'Intellectuals' at this juncture - their role and function - and, on the other, with 'religion' as both problematic inheritance and rich opportunity. It is an interaction which has been central to the research and writing, over the last decade, of Friedrich Wilhelm Graf, who provides the Introduction. The term 'Religionsintellektuellen' is one which he has promoted. He notes, in the modern history of religion since 1800, alongside the institutional management of meaning within churches, synagogues and mosques, the emergence of a variety of new faith movements with their own conceptions of religion and its place in the culture of modernity. 'Religionsintellektuellen' saw themselves as ideally equipped to carry out the necessary social task of interpreting, discarding, re-inventing or reinvigorating 'religion', as it had been historically received, in the shifting circumstances of the late nineteenth century. Where was 'meaning' to be sought and what were the hallmarks of 'good religion'?

Any collection of articles which tries to address such matters cannot hope to constitute a comprehensive exploration of the intellectual, cultural, social and political worlds, whether solely of Germany, or of Europe as a whole, from the late-nineteenth century until the mid-twentieth - the span of this present volume. The one 'exotic' contribution comes in the form of a study by Astrid Reuter which considers the Frenchman, Roger Bastide, born in 1898, whose distinction as an ethnologist derived from his deep study of African religions in Brazil. Part of its interest lies in considering the personal Odyssey of this Calvinist from the Cévennes. This piece apart, however, the focus is on German intellectuals and their milieu.

The articles fall into two broad categories: studies of individuals and general assessments. The former, whether be accident or design, treat men who attempt contrasting strategies in aligning 'religion' and 'modernity'. Ulrich Sieg takes us once again down a fairly familiar path as he traces the elements in Paul de Lagarde's mental world. It is an examination which is as much concerned with the afterlife of his writing, not least in the mind of Adolf Hitler, as with the fusion of the ideas themselves. Claus Arnold, on the other hand, probes the world of 'Catholic intellectuals'. 'Modernity' and 'Antimodernity' were seemingly 'at the crossroads', to use a term which became almost a cliché in the period before 1914 with which he is concerned. His discussion of the currents of opinion, and forces of control, makes it clear that such a simple division does not do justice to the complexity which abounded. Anti-modernism could be just a conservative reflex. However, in some quarters, Catholic 'counter-intellectuals' aspired to be as intellectually coherent and radical, but within the Church, as intellectuals outside the walls conceived themselves to be.

Accommodations and oppositions also feature in the treatment of the other individuals whose careers and ideas are considered in some detail. Harald Haury traces the consequences, for Johannes Műller, of the conclusion that Western Culture, and the Christendom with which it had for so long been linked, was in crisis: a common conclusion, of course. He supposed that it was no longer possible to be Christian in the old way but it was desirable to shape a 'new Christendom'. 'Modernizing', however, in the event, proved to be a rather complicated business. Adolf Harnack, too, in a different way, found himself engaged in another reconciliation of Protestantism and Modernity. Christian Nottmeier traces both the evolution of his thought and writing about Christendom over decades, but also highlights the reception of his standpoint in the 1920s. This entails, amongst other things, debating with Karl Barth. That 'set piece' is well-known, but the contributor provides it with a rich theological and cultural context. The final 'personal' study is of 'Left Catholicism' as exemplified by Walter Dirks. Not that Dirks perhaps, was in his career, exactly a 'typical' intellectual in the sense that that word might be applied to others who come in and out of these pages. He lived more closely than most to worlds where theory and 'real life' met. Nor was he 'typical' of the broad mood explored in the collection in that he remained until the end of his life true to the Catholic Church.

As individual pieces, these articles on individuals all have their merits particularly when, as is often the case, their standpoints are not presented in the abstract but, by means of brief biography, related closely to different phases in their lives and the changing political and cultural contexts in which they operated. It falls to Volkhard Krech and Gangold Hübinger to range widely in discussing just what their contexts were and what ours are today. It scarcely needs to be said that they too can only hint at the complexity of the issues involved. Familiar names, from Troeltsch to Pope John Paul II, to name only two, float before us to remind of the multiple standpoints from which 'Religion in Culture' can be approached. A further summary of summaries, at this point, would add little. An insular reviewer notes, with apologetic detachment, the extent to which, both in the text and in the notes, the references to the roles, functions and significance of 'intellectuals' in this period are to French or German authors. We can be left to speculate on what cultural message is thereby being sent. It is, however, the combination of individual studies with thought-provoking general reflections which make this volume worthwhile for historians of religion, but not only for them.