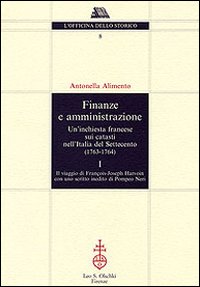 Since Franco Venturi's Settecento riformatore, published in Turin in seven tomes (Einaudi, 1969-90), Italian historiography about reforms and Enlightenment quickly developed, finding in some specific issues and areas the right ground to test the deep intersection among ideal absolutism, State building, social dynamics and technique. The conspicuous work of A. Alimento belongs to this scientific tradition: as the authoress explains in the Preliminary, her interest for French and Italian financial culture ascends to 1984, while a national research program was exploring Venturi's suggestions; the Grand Duchy of Tuscany and the Kingdom of Sardinia were the main focus of her attention, being with Lombardy the most advanced examples of real application of new fiscal rules.

Studying the figure of François-Joseph Harvoin and the political context in which he operated, Alimento improves the knowledge of this XVIIIth century moment demonstrating the subject is still quite topical thanks unpublished sources and the renewed analysis of cadastres and other equalization instruments. In these two volumes she edits and introduces an important set of memorials, projects and relations written by Harvoin during his mission to Italy, and by some of his principal interlocutors, as to say French ministers and the famous Italian reformer Pompeo Neri. The whole corpus allows Alimento to show the strong and functional curiosity of the French government for the Italian inner situation, and the intense circulation of economic theories and models between the peninsula and the rest of Europe. More precisely the French look was at Piedmont in its complex space nature, at the Austrian Duchy of Milan and at Tuscany in which Neri tried his fiscal solutions. The structure of the book underlines the interlacements among those three different States, and between a technician like Harvoin and the group of selected politicians, thinkers and bureaucrats he was related to in 1763-64.

The book is divided into ten chapters, some of them with a quotation from Harvoin's writings for title. The first one -"Imiter un projet utile..."- is about the reasons of his mission to Italy, decided by the Superintendent of Finances d'Ormesson after the Seven Years war: France economy was tried and a new system of fiscal drawing was absolutely necessary. Harvoin, "receveur général des finances", was the right man to explore how foreign governments created cadastres. He did his job with consciousness, collecting a lot of written material and keeping a Journal. Before leaving and during his stay, Harvoin had to face a methodological problem: while d'Ormesson and Turgot preferred cadastres "geometrico particellari a stima peritale" (21) strictly organized by the centre, Forbonnais and L'Averdy thought that every periphery could express its cadastre using local technicians. In the second chapter the authoress deepen the theme showing Souls and practices of French Administration. There were three equips working on fiscal reforms, one late-mercantilist around Gournay and Forbonnais, one empiric around Bertin and Trudaine, the last one more dynamic inspired by Forbonnais and D'Ailly. Forbonnais believed in a centralized system based on qualified supervisors employed in each pays, and Harvoin, following his example, used the inquiry as instrument to understand different fiscal traditions. As we learn in the third chapter (Between Secret and Collaboration...), he studied memoirs and questionnaires arriving from Italy, finding a large collaboration in Piedmont (minister Pralormo sent him six volumes filled with instructions, descriptions and advices), less in Lombardy. The king wanted to fix his relationship with France and Harvoin could read important reports about the Province di nuovo acquisto (Monferrato, Lomellina, Alessandrino) where Giambattista Lorenzo Bogino, from Turin, and Beltrame Cristiani, from Milan, started their reformation plan regarding trade and coins.

Who was Harvoin, then? The fourth chapter ("Je n'aime point à etre maitre...") is dedicated to his career in public administration: born in 1715, he became "contrôleur ordinaire des guerres" in 1744 and "secrétaire du roi" in '49. Close to Bertin, he had the place of general tax collector in Alençon, getting a good experience in local finances and always being a loyal servant of the crown. Thanks his diplomatic attitude, he established kind relationships in Savoy, in Tuscany and in other Italian States satisfying his superiors in the best way. His social network and his savoir-faire let him to have long conversations with Carlo Emanuele III and Pompeo Neri, who both spent with him many hours talking about economy and fiscal solutions. At least, in the fifth chapter, we follow him in Italy where he stayed since August 1763 until April 1764 and, trough Savoy, he had his first direct contact with the reform in the Kingdom of Sardinia (Le riformedi Carlo Emanuele III...): the new cadastre was the result of a series of laws promoted since 1698 with the intention to reduce feudal and ecclesiastical privileges and enclaves. As Harvoin wrote in his Mémoire, in Piedmont coexisted three types of cadastres: the ancient ones, descriptive and not uniform; the cadastre of Savoy made in 1738; the cadastres started in 1763 in the new provinces of the State, geometric and based on statistic and central data. This last was the best model, able to give an exact map of the land and to spot any taxable unit. Realized after years of application by a special Junta - as d'Ormesson liked - the cadastre of the provinces of Alessandrino, Novarese, Lomellina rejected the Lombard planning out and, trough the office of Intendenza, tried to localize and equalize the inner boundaries of East Piedmont levelling ecclesiastical and aristocratic peculiarities.

Fascinated from the experience - a mix of absolutism and local cooperation at his sight - Harvoin contributed, as Alimento underlines, to create the myth of the Sabaudian reformism. This is the subject of the sixth chapter ("Les princes de la Maison de Savoye...") in which the authoress reconstructs the thick correspondence between the French envoy and some ministers like Morozzo della Rocca: compared to the cadastre made in Lombardy, Harvoin seemed to transmit the idea that the Piedmontese one was better. Anyway Alimento remembers that the inquiry on titles of nobility and the redaction of maps stopped many times and that in 1768 it wasn't finished yet. However, Piedmont wasn't the only State doing reforms. Tuscany, thanks the intelligence of Neri, was trying to improve what the minister had started in Lombardy, as to say to create an equal distribution of charges. Harvoin met Neri in Florence in March 1764 and debated with him about theory and practice: "le ragioni del riformismo settecentesco nella riflessione di P. Neri" (119) are the subject of the seventh chapter, in which Alimento analyzes his point of view about cadastres and fiscal policy. Neri is well known by the historians of the XVIIIth century, but his dialogue with Harvoin adds new particulars about his vision on French, Austrian and Piedmontese administrations, and confirms his believe in the principle of equality of every contributor in front of the fiscal power. Moreover, he expressed his preference for the Lombard system: it reduced the role of communities, giving to any single taxpayer more responsibility in declaring his goods.

How to translate the Italian way to equalize in French words? The answer is in the last three chapters of Alimento's Introduction. The eighth is entitled "Le Piémont et le Milanais sont des petites provinces et des plaines..." and the quotation reassumes the thinking of Forbonnais and Pingeron about their cadastres. As absolute and small States, the Kingdom of Sardinia and the former Duchy of Milan were easier to map and equalize than France. Including the Relation of Neri to Harvoin in his Principes et Observations &#338conomiques, Forbonnais - inspired by Jansenism too - disproved the imposition of the "vingtième" as universal tax, saying it was unfit for a big country like France, where cultivations and privileges were larger than in Northern Italy. Anyway, according to the economist Pingeron, the Piedmontese cadastre was a good model because the cooperation between communities and superintendent, in spite of problems pointed out by Harvoin, seemed to work. But the adoption of that model - as the authoress shows in chapter nine ("En France on regard bien le Roy...") - made the French reform to fail. Obviously it wasn't the only cause but after Harvoin was back, the group of L'Averdy, who promoted an orchestration among different voices, was removed. Nor the Italian example nor the English one was followed by the new administration of Maupeou and, even if Harvoin's writings had an inner circulation, the general cadastre remained a dream. The debate didn't end, anyway: both Turgot and Necker - to conclude with the last chapter ("Ces pieces existent dans les bureaux...") - pondered for years on the problem looking for responses into the inquiry in Italy, and the Mémoire produced by Harvoin remained a capital source until the Revolution. Insisting on Piedmont as an exception, like a mirror it reflected the image of a big country enable to choose the way of radical reformism.

In the first volume Alimento edits 26 letters and instructions to Harvoin directed in Italy; the Journal de la route et du travail de Mr. Harvoin; his reckonings and expenses; the Objets sur l'etablissement du censimento en France submitted to Neri's opinion; the important Réponse de Mr. le Président Nery [sic]. The second volume contains the long and articulated Mémoire sur les cadastres written by Harvoin in seven parts. Both of them are commented with a rich critic apparatus helping the reader to follow the text, to notice corrections and integrations (printed in red ink), to recognize people mentioned by Harvoin and to deepen the economic and political language of his time. A difficult lecture, perhaps, but not to be ignored from anyone is studying the fiscal system in XVIIIth century Europe.