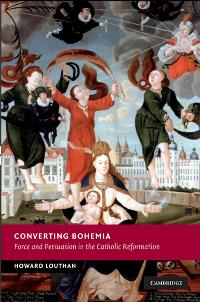 Howard Louthan's inspiring monograph "Converting Bohemia" immediately attracts the potential reader's attention with its cover illustration depicting a recently largely popularized image of the Prague defenestration of 1618. The votive oil painting that was probably comissioned by one of the defenestration victims, Vilém Slavata (1572-1652), was displayed as one of the highlights at the ambitious exhibition "The Glory of Baroque in Bohemia" in the National Gallery in Prague in 2001. As the largest exhibition focusing on baroque in the Czech lands since 1938 this project aroused lively discussions on the interpretation of the post-White Mountain period in the Czech Lands. Praised on the one hand for the rehabilitation of what for a long time has been derogatively referred to as the 'dark ages' of Czech history and yet on the other hand also criticized for excessively pompous and uncritical celebration of the baroque period.

The younger generation of Czech scholars especially is preoccupied with the difficult search for a balance between the traditional grand narrative evolving around the reformation ethos and the approach that appraises the baroque culture and thus almost inevitably partially accepts the celebratory rhetoric of the period. Howard Louthan's book seems to be closer to the position enchanted by baroque splendour, which does not necessarily have to be perceived as negative. However as a book published by Cambridge University Press within the series "New Studies in European History" it will probably have a much broader impact than the many significant texts in Czech language it draws on (Petr Ma'a, Eliška Čá ňová, Ivana Čornejová, Jiří Mikulec, Jan Royt, Vít Vlnas, Josef Petrá ň etc.). Let us have a closer look inside.

Professor Louthan's focus is on the confessional transformation of Bohemia in the post-White Mountain period with emphasis on outward cultural representations rather than internalized patterns of belief which are largely inaccessible to a historian. Quite problematic is the author's synonymous treatment of the words Bohemia and the Czech Lands. Louthan clearly favours Bohemia over Moravia, Silesia and both Lusatias. However the research of the so-called 'side lands' of the Czech Crown has been enourmously vital and prolific during the last twenty years and has contributed to the reassessment of the many theses and models constructed for the example of Bohemia. Not to mention another recent large-scale exhibition hosted by the National Gallery in Prague: "Silesia - A Pearl in the Bohemian Crown". The centre and periphery would have certainly deserved a more balanced treatment.

The book, which is close in its structure to a collection of essays, opens with a remarkably fresh analysis of the two respective acts of defenestration that took place at the New Town Hall in 1419 and at the Bohemian Chancellery in Prague Castle in 1619. Howard Louthan makes use of both defenestrations and of the Old Town execution of 1621 to undertake a detailed study of escalated religious conflict and ritualized violence and he pleas for integrating the prolonged Czech confessional struggle into a wider story of religion and violence in early modern Europe.

The key phase of renewal of Catholicism in the Czech lands is framed by professor Louthan with two spectacular festivities which he regards as symbolic turning points in the recovery of the souls for Catholic piety: the translation of St. Norbert's relics from Magdeburg to Prague in 1627 and the canonization of John Nepomuk in 1729. Howard Louthan very appropriately comments on the significance of obtaining the relics of the founder of the Premostratensian order who was celebrated as the suppressor of heresy. This early acquisition of the new patron saint is suitably contrasted with the later rise of a native saint represented by John Nepomuk. While the cult of St. Norbert can be regarded as an import that was intended to revitalize Catholic devotion, the veneration of St. John Nepomuk spread from the Czech lands to such distant places as Brazil, Mexico and China. Moreover the Nepomuk legend with its emphasis on the saint keeping the confessional secret had a great potential for promoting the sacrament of penance.

Towards the end of his analysis of reintroducing Catholicism to the Czech lands Howard Louthan attempts a very remarkable anatomy of the case of Simon Abeles, a Jewish adolescent boy from the Prague ghetto, whose murder was utilized to foster the Catholic pressure on the Jewish community. The threat of coersion and violence coexisted with the baroque splendour in a symbiosis which has been extremely difficult to unravel and to interpret for generations of scholars. Professor Louthan's monograph offers a valuable contribution to discussions. As he rightly observes the pressure to religious homogenization lead to orthopraxy rather than orthodoxy. Stimulating research is being conducted on various forms of secret protestant non-conformism (Zdeněk Nešpor) that were lively especially in some regions (e.g. Eastern Bohemia, the Bohemian-Moravian highlands, Eastern Moravia, Silesia). The public representations of these often highly individualized forms of religious dissent were limited and thus regrettably remain out of the scope of interest of the reviewed monograph.

Howard Louthan's Converting Bohemia is a highly readable book that deserves praise for the author's fine work with iconographic sources and that can prove itself thought-provoking for both Central European and other scholars. Let us hope that other fresh voices will also be heard.