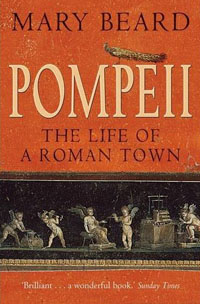 At the outset, it is important to identify clearly the audience for whom Mary Beard's Pompeii. The Life of a Roman Town is intended. For scholars of the ancient world, there is nothing new to be found in this book in terms of information, argument, or methodology. Its potential as a classroom text is severely limited by the lack of footnotes or even parenthetical source citations for its (commendably) frequent quotations and paraphrases from ancient literary and epigraphic sources. Finally, although the text frequently identifies itself as a "guidebook", an actual visitor to the site who attempted to navigate the ancient streets and identify specific monuments and buildings using this book would quickly find it a frustrating experience. On the other hand, if, prior to such a visit, a tourist were to read this book as a general introduction to the city and especially to the gritty details of Roman daily life, he or she would be richly rewarded. Beard's Pompeii is best viewed as the latest in a long line of books that seek to summarize knowledge about the famous ancient Roman city for the broadest possible general audience, and on these terms, it is a highly effective synthesis of up-to-date scholarship expressed in a reader-friendly manner.

The first chapter, "Living in an Old City", offers an overview of Pompeii's history and reminds readers that many different cultural strands influenced the development of this "Roman" city. Eight subsequent chapters address topics such as "Street Life", "Earning a Living", and "The Pleasures of the Body". These chapters cover all the main subjects that one would expect to find in such a book, and Beard adroitly combines archaeological and literary evidence to present a well-rounded portrait of life in ancient Pompeii. In addition to traditional Pompeii-related topics (styles of wall painting, layout of houses), Beard includes summaries of much scholarship that has appeared in the last decade or two and which illuminates new areas of knowledge (traffic patterns derived from curb wear, water supply systems, etc.). She also has a gift for using colorful anecdotes to illustrate broader points and, while introducing a number of scholarly debates, never allows the text to bog down in excessive minutiae or tangents. One of the pleasures of reading this book is that Beard has an eye for debunking commonly held myths or beliefs about Pompeii and Roman civilization. For example, she smartly refutes the stereotype that the Pompeii which we see today represents a city abruptly "frozen in time", and instead constructs a portrait of a city which was abandoned and then subjected to multiple cycles of looting, destruction, and reconstruction. The book also does an excellent job of explaining how many post-Roman events (such as bombing during W.W. II) have altered the site, but on the whole it is curiously silent on developments over the last half-century. A discussion of how millions of tourist visits per year and the tensions between preservation, budgets, and accessibility have affected (and continue to affect) Pompeii would have fit nicely into the narrative that Beard presents and would have brought the story up to the present.

Throughout the book, Beard herself is a strong authorial presence with a distinctive and opinionated voice. This is especially true when she is sifting through the theories of various scholars. At such times, the text is peppered with her bluntly-worded assessments ("I very much doubt ...", "there is hardly a shred of evidence for ...") or, most commonly, she responds to an interpretation with the simple rhetorical challenge, "Why?" This consistent and healthy skepticism is one of the book's strengths, and in these passages, she both deftly models the process of critical analysis and reveals for a general reader how often the conclusions proposed by scholars are based on a series of assumptions that are open to varied interpretations, rather than founded upon irrefutable facts. At times, however, her dismissals border on the flippant and one is left wishing that she had offered a bit more specific evidence to back up some of her own assertions. The book is written in a breezy, informal, and earthy style that will probably split readers into two sharply divided camps: those who find her style refreshing, funny, and charming, and those to whom it might come across as a bit smug, grating, and self-satisfied. Personally, I found the distinctive style enjoyable and think it is probably an effective way to engage readers, with the caveat that her frequent use of British slang (e.g. "plonk" for cheap wine) might be off-putting to an American audience.

There is a map of Pompeii and the text is amply illustrated with over one hundred black and white illustrations and two dozen in color. These are a helpful mix of photos, plans, drawings, and reconstructions, and are well integrated with the text. A few (e.g. 88), however, could use some photoshopping to enhance their clarity. A well-chosen annotated bibliography arranged by chapter offers plenty of guidance for further reading.

For the layperson interested in Pompeii or Roman life, Beard's Pompeii is an entertaining, educational, and, quite possibly, eye-opening read.