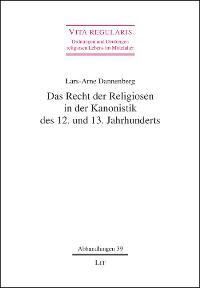 This book, a slightly revised version of the author's doctoral dissertation from 2007, examines the classical canon law of religious life. Building on the studies of his adviser, Gert Melville, [1] Dannenberg explores legal developments from the time of Gratian's Decretum (c. 1139-1150) to the appearance of the Liber Sextus (1298), devoting especial attention to the ius novum of papal decretal law as found in the Liber Extra (1234) and the writings of thirteenth-century decretalists. The central problem he attempts to clarify is the relationship between the ius commune of the medieval Church and the ius particulare of individual religious orders. To what extent did popes and canonists attempt to regulate medieval religious orders? And to what extent were individual religious orders able to persuade popes and canonists to recognize their statutes and customs? Thematically, Dannenberg restricts himself to issues discussed in X 3.31-37, which came to be the primary locus for questions pertaining to the ius religiosorum. Relevant issues not dealt with in these titles, such as monastic tithes (X 3.30) and ius patronatus (X 3.38), receive only passing consideration.

The first three chapters are merely introductory. Chapter 1 explains the book's method and approach. Chapter 2 provides a brief introduction to the various genres of canonistic literature, followed by short biographies of the most important decretalists (which, somewhat confusingly, are not always arranged chronologically). And chapter 3 provides brief overviews of the development of canon law from Gratian's Decretum to the Liber Sextus, the rules and constitutions of religious orders, and the emancipation of canon law from theology.

With chapter 4 the reader finally comes to the heart of Dannenberg's study. His approach is both thematic and diachronic. Rather than following the structure of the Liber Extra, Dannenberg instead identifies key issues in X 3.31-37 and then studies how canonistic reflection on these issues changed over time. He ranges widely, treating in turn canonistic understanding of the sources of law (103-116), issues pertaining to the administration of religious houses (116-146), issues pertaining to persons who wish to enter or leave the religious life (146-332), religious vows and dispensation from them (333-395), and special legal questions (395-420). In each section, he focuses on original opinions rather than attempting to identify and discuss the views of each and every decretalist. Different sections thus feature different canonists, although some individuals appear with greater frequency than others, most notably Pope Innocent IV, whose radical ideas on the nature of religious life and the power of papal dispensations are well known and have long attracted scholarly attention.

Dannenberg is at his most interesting and innovative in the excurses scattered throughout chapter 4, which show how canonists of the classical period could have commented on important aspects of medieval religious life, but chose not to. In their commentaries on consuetudo and ius particulare, for instance, medieval jurists explicitly investigated the relationship between the ius commune and the local statutes of countries, cities, and bishoprics, yet passed over the rules and statutes of individual religious orders in silence. "Lediglich an versteckten Stellen innerhalb des Abschnitts zum ius religiosorum finden sich vereinzelte Verlautbarungen, aus denen man freilich ein Scheitern herauszuhören vermeint" (113). Similarly, in the concept of universitas canonists had a tool which they could have used to analyze medieval religious orders as transpersonal legal personalities. They did not, however, because "die Klöster und Orden entzogen sich einer straffen Hierarchie. Orden mit ihrer eigenen Organisationsstruktur, die einer übergeordneten Instanz Papsttum nicht bedurften, wurden grundsätzlich nicht thematisiert" (145).

The "Schlussreflexion und Synthese" of chapter 5 attempt to give some unity to the largely independent Einzeluntersuchungen of chapter 4. Dannenberg's main conclusion is that when the ius commune came into conflict with the ius particulare of individual religious orders, the ius commune usually prevailed (423). Medieval canonists conceded the ius particulare of individual religious orders legal force only in the absence of prescriptions from more universal legal sources, such as papal decretals, and actual conflict between the norms of the ius commune and the statutes and practices of individual religious orders led in most instances to concessions from the orders. Thus, for instance, papal and canonistic recognition of the right of oblates to decide for themselves whether or not to remain in the cloister once they had obtained the age of majority, encouraged religious orders to raise the age of entry or abolish the practice of child oblation entirely (208-211, 423). Similarly, papal insistence on a period of novitiate led to the eventual abolition (admittedly only at the Council of Trent) of religious profession prior to the completion of a year-long probationary period (256). In the same way, canonistic reflection on the nature of religious vows led to their standardization around the triad of poverty, chastity, and obedience (333-359).

An appendix (433-447) and bibliography (449-498) round out the book. The appendix provides a helpful list of the approximately 100 known manuscripts of Heinrich of Merseburg's Summa titulorum (c. 1240), as well as a less useful working edition of Summa titulorum, ad X 3.31-37. Dannenberg's transcription makes sense for the most part, but contains several errors, such as "statim" for "statum" (439), "rimanere" for "remanere" (440), and "iubere" for "nubere" (441). Punctuation is often overly sparse, and, with but one exception, Dannenberg does not provide modern references for the allegations. The bibliography is very long and will no doubt be a valuable resource for scholars interested in medieval religion.

Dannenberg's book has all the strengths and weaknesses of the German dissertation genre. It rests on exhaustive and wide-ranging research, but lacks an overarching thesis. Although organized into clear sections and subsections, the writing is dense and, in the more theoretically-engaged portions, can be laden with jargon. The Latin in both the main text and the footnotes, moreover, contains an annoying number of typographical errors.

The merits of this book, however, outweigh its faults. Dannenberg's study makes a solid contribution to the history of medieval religious orders. It has much to offer specialists of both canon law and medieval religion.