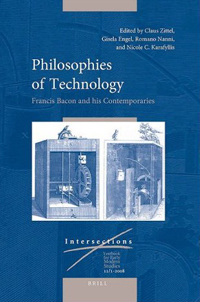 The 17 essays, and introduction by Claus Zittel, in this collection attempt to historically reconstruct various dependencies of philosophical and scientific knowledge of the material technical culture of the Early Modern era and to draw systematic conclusions for the writing of Early Modern history of science. Bacon is seen as an indispensable figure for the historical and systematic investigation of the complex interdependencies between science, technology, philosophy and society. His philosophy gave birth to the scientific dream of modernity that the advancement of society goes hand-in-hand with the development of all technologies. The examination of Bacon's experimental philosophy is thus the starting point for a discussion of the central questions of the work. Zittel elaborates a series of consequences for the historiography of the Early Modern era which lead to, among other things, a revision of the standard interpretation that the work of Bacon addressed itself to the task of replacing a culture of a rhetorical-literary type by that of a techno-scientific type.

The work, the outcome of a conference which took place in Frankfurt am Main, Germany, in July 2006, is divided into four parts: I Beginnings, II Bacon: Mechanics, Instruments and Utopias, III Metaphorical Models, IV Bacon's Legacy. It is organized along interdisciplinary lines, with the specialist fields of the authors encompassing history of science and technology, philosophy, English, legal history and art history.

Luisa Dolza asserts that the in-depth study of the genre of Theatre of Machines reveals that at the time of Bacon's sojourn in France (at the age of 16 to 18) technology was far from being the exclusive domain of unknown technicians and was of interest to well-established scholars who were assigning a religious meaning to it. Arianna Borrelli focuses on the history of barometers. This invention influenced in various ways the development of philosophical methodology in, besides Bacon, Giambattista della Porta, René Descartes and Robert Fludd. Practitioners like Cornelius Drebbel, Jacques Besson and others influenced the conceptual world of 17th-century natural philosophers with their mechanical inventions, even to the point of creating metaphors. Sophie Weeks, in an almost 60-page essay, pursues the latter theme looking at technical metaphors and paying particular attention to the explanatory function of technical models in Bacon. She points out that although Paolo Rossi's Francis Bacon: From Magic to Science (English edition 1968) highlighted Bacon's appraisal of the mechanical arts, the function of mechanics within Baconian inquires has hitherto not been adequately investigated.

Jarmo Pulkkinen discusses William Harvey's use of metaphor in the works in which he introduced the doctrine of the circulation of the blood, of animal movement and the structure of muscles. Andrés Vaccari points out that Descartes was the first to extensively and systematically introduce the machine metaphor into the biological sciences. Vaccari's main focus is the way Descartes set out to legitimize the machine metaphor as an exemplary instrument of the new science. Claus Zittel in "Descartes as Bricoleur" points out that Descartes has traditionally been depicted as the great antipode to Bacon. In many fields of natural philosophy, however, Descartes was above all an empirical researcher. He concludes that Descartes was in essence a Baconian.

In the "Introduction" Zittel recalls that in Bacon's era six crucial instruments were invented within the space of a few decades, namely the telescope, microscope, air pump, pendulum clock, thermometer and barometer. Todd Andrew Borlik's "The Whale under the Microscope" is one of a group of essays concerned with the history of instruments and their role in the formation of philosophical theories. He maintains for example that Cornelius Drebbel is personified in the figure of the inventor of the barometer in Bacon's New Atlantis.

Berthold Heinecke traces the influence of Bacon's thought on the seventeenth-century German poet Philipp Harsdörffer in an effort to illuminate the history of Bacon's reception in Germany. Harsdörffer's popularisations of Bacon may (Heinecke suggests cautiously) have been an influence on the founding of the Deutsche Akademie der Naturforscher Leopoldina in 1652 and perhaps even Leibniz's foundation of the Sozietät der Wissenschaften zu Berlin in 1700.

Thomas Brandstetter recalls Thomas Kuhn's characterization of the 'Baconian tradition' by three factors - it's reliance on experiments (rather than mathematics or systematic theory), its intimate connection to the world of craftsmen and technical practitioners, and a certain Utopian undercurrent. Brandstetter applies these Baconian characteristics in describing a cluster of inventions submitted (mostly by amateurs) to the French Academy of Sciences in the 1780s in connection with a contest for the renovation of the old machine of Marly which had supplied water to the fountains of Versailles since the 1680s. The art historian Pablo Schneider's essay is also concerned with Versailles in the era of Louis XIV. His investigation centres on the fountain called the Parterre d'eau and looks at aspects of its interpretation like the impact of limited space and the attempt to give plastic form to a scientific world view.

Moritz Epple examines the interaction between hydraulics and hydrodynamics in the age of the Enlightenment. His focus is on the gap between theory and practice and hydrodynamical and hydraulic Utopias in this period. He concludes that for more than a century and a half theory and practice had developed at a great distance from one another and that several intermediate forms of knowledge production emerged. Epple discusses the complex interactions between hydrodynamics and hydrotechnology and he argues that the concept of hydrodynamic pressure emerged from technically-orientated considerations. In a contribution entitled "The synthesis of facts in Linnaean Natural History", Steffan Müller-Wille recalls that Bacon (in De augmentis scientiarum) had distinguished two kinds of natural history, namely 'narrative' and 'inductive', the former being inferior to the latter. Müller-Wille's exploration of the Baconian legacy focuses on the work of the Eighteenth-Century naturalist Carl Linnaeus and his indebtedness to Bacon. Linnaeus's classification of the sciences shares for example Bacon's rejection of 'narrative' natural history. He argues convincingly that Bacon's legacy must not be understood as a legacy of a particular scientific methodology, but rather as legacy of a methodological problem, namely that of induction.

All the essays in these twin volumes reflect the close connection between technical models and knowledge production in natural philosophy, natural history and epistemology. The work represents a 'plaidoyer' for a form of history of technology as part of a broader cultural history of the sciences rather than as a pure history of technology. Whereas the editors and contributors have indeed convincingly argued the case for such an approach, it seems unlikely that a single individual will be able to appreciate more than a fraction of the interdisciplinary perspectives presented. It is to be greeted above all as a complimentary approach to the more traditional and narrower, but nonetheless indispensable, routes taken within history of technology.