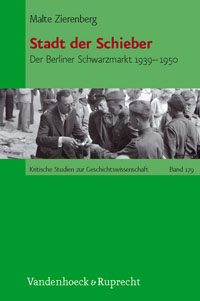 Culture and the economy are commonly perceived as two separate if not antithetical realms. In recent years this rather rudimentary approach to the nature of the relationship between the two has been thoroughly revised. New approaches emphasising the importance of culture for the understanding of what is happening in economic life start dominating scholarship. Thus for example 'Cultural Economy', which is today an established field of research with its own journal and annual conferences, is perhaps one of the most profound manifestations of this development in the social sciences. Historians did not remain aloof from these developments. After a period in which economic history seemed to be pushed to the margins of historical studies, it is now progressively moving back to the centre of the historians' gaze. [1] Stadt der Schieber is an outstanding example of this recent trend in the discipline of history. It is a meticulous study of the black market primarily in post-war Berlin that provides stimulating insights on this history. The book handles the black market as an economic activity operating within a broader framework of the interplay between people, goods, city space, and social values. A central pillar in the analysis is the concept of exchange, both in economic sense as a transaction between the different parties on the marketplace, as well as a form of cultural exchange. In this way the discussion of the relationships between suppliers and their customers, the flow of goods, strategies of distribution and marketing as well as exchange practices become part of a more challenging expedition into issues of trust, perceptions of risk, gender issues, and questions regarding the significance of marketplace to our understanding of the German past.

The book is neatly divided into five sections each focuses on a different time period and deals with different themes. The first section offers a historical overview of the black market in Berlin suggesting that this phenomenon has a much longer history that goes back to World War One. This approach underpins a sense of continuity in German history as it describes how the black market during and immediately after the Great War informed practices and the perception of this form of trade thereafter. Especially for the Nazis this practice of informal trade posed a serious ideological challenge. Thus in addition to various legislative measures the Nazis implemented in order to dispose of what they defined as illegitimate exchange, they developed what Zierenberg calls a "Kult des Spendens und Schenkens" (61) to undermine the value system represented by the black market.

The second section of the book provides a more detailed analysis of the forms and practices of black marketing under National Socialism. This section is based on an in depth study of the case of Martha Rebbien who was arrested for illegal trade on November 9, 1944. Her case, however, is not discussed in isolation, but is analysed in tandem with 183 further cases of people who were accused and trailed by the Nazis for black marketing. With this impressive database Zierenberg provide a thick description of the social profile of the people involved in the black market, the goods that were circulated, and the ways in which they were exchanged. He shows that up until the final year of the war this informal trade took place mainly in the private sphere and was based on personal acquaintances and a tight network of trust among suppliers and consumers. With this emphasis on continuity and the deep history of the black market in Berlin, Zierenberg departs from more conventional conceptualisations of the black market that tend to allocate its origins to the final stages of World War Two.

With the third section the book commences the discussion of the black market in the years after 1945. The focus of this discussion is the transition of the black market from a privet activity that was based on social ties, to a public site in which almost all groups that were present in Berlin after the war dwelled. Zierenberg explain this shift in connection with the total pandemonium and the power vacuum of 1945. He argues that in this particular situation the spontaneous emergence of marketplaces all over the city should be read in conjunction with the people of Berlin attempts to provide for some of their basic needs. The fourth section addresses the so-called classical period of the black market, the years between capitulation and the currency reform. Consistent with his approach that examines the black market both as an economical activity and cultural practice, Zierenberg argues that the black market was not a chaotic bustle, but was embedded in the reality of the period. It developed its own rules and regulations, and was responsive to the changing demand and needs of the people. This explains its enormous success in those years. At the same time he does not underplay the 'dark sides' of this informal trade: Buyers powerlessness against the dealers, the growing gaps between the haves and have-nots, as well as the criminal aspects involved in this trade are all discussed here in great detail as well. Particularly interesting here is the discussion of the involvement of soldiers in the black market, which as Zierenberg notes enhanced social tensions at that period. In this context I would have expected a more elaborate discussion of the involvement of the victims of National Socialism in black marketing, especially of Jews. The innovative approach that Zierenberg employs in this study would no doubt be useful for any future attempt to explore in more detail these significant aspects of black market history in Germany. [2]

The fifth and final section of the study challenges another widespread contention regarding the dissolution of the black market through the currency reform and finally the Wirtschaftswunder. According to Zierenberg the black market was much more resilient than previously assumed. This is mainly because of what he depicts as the gap between the everyday life experience of ordinary people and Grosse Politik. But what does all this tell us about the significance and meaning of the black market for the culture and economic development of the post war Germanies? The concluding section of the study offers an illuminating answer to this question: "Schwarzhandel als radikale Markterfahrung". Thus for Zierenberg the experience of a radical free market was decisive for the development of more restrained and socially oriented notions of the economy both in East and in West Germany. Here again there is a strong sense of continuity with the pre-war period. Already in the 1920s the black market was viewed as a warning sing against the dangers of the devastating forces of the marketplace.

Given the manifold and differentiated discussion of the different sections of the study reducing the multiple meanings of the black market to this negative lesson seems too restrictive. This however does not detract from what this study has achieved. Without a doubt, this is an outstanding book that adds new levels to our understanding of the cultural meaning of the marketplace. It will hopefully encourage more historians to follow, and to further explore the multifaceted interrelations between culture, society and the economy in modern German.