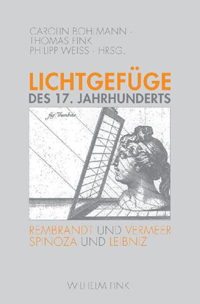 This book is the proceedings of a conference on Lichtgefüge in the seventeenth century that took place at the Herzog August Bibliothek in Wolfenbüttel in 2004. The conference was organized in the framework of the research program of the Forschungsgruppe Lichtgefüge, a Berlin and Braunschweig-based research group of art historians and philosophers, consisting of Carolin Bohlmann, Thomas Fink and Philipp Weiss. It intends to study, in its own words on its website (http://www.sgkd.de/licht/forschungsgruppe.htm), "light as paradigm of art and natural philosophy". The Tagung Wolfenbüttel was the group's second major contribution on this theme. The first was a special issue of Kritische Berichte. Zeitschrift für Kunst- und Kulturwissenschaften, published in 2002, in which the same editors gathered art historians (Victor Stoichita, Gregor Weber), a historian of architecture (Fabio Barry) and a historian of philosophy (Thomas Leinkauf) to discuss seventeenth-century Lichtgefüge. The volume under review continues along the same lines, although regrettably, architecture was not discussed in Wolfenbüttel. In addition, historians of science (optics) were invited to join the discussion.

The central thesis of the research group is (as the editors state in their introduction) that "dem Licht des 17. Jahrhunderts [...] sowohl ein spezifischer Bildbegriff, als auch ein ikonisches Erkenntnismodell [entspricht]." (7) This does not refer to the thesis that the camera obscura allowed seventeenth-century opticians to develop a new concept of optical image, as argued in the conference Inside the camera obscura - Optics and art under the spell of the projected image at the Max Planck Institute for the History of Science in 2006 (published as MPI Preprint 333). The specific concept of image which the editors have in mind is intended to grasp primarily a development in art history, not in the history of science. Since the work of Erwin Panofsky linear perspective has become a locus classicus of the study of artistic practice and science, and the history of perspective, which Panofsky in Die Perspektive als symbolische Form (1927) disconnected from optics, a field of research of its own, independent from the history of science and the history of art. Due to this historical separation between perspective and optics which at the same time was constitutive of a field of study of art and science, light, in contrast, has received limited attention. This volume wishes to remedy this: "Galt in der Kunst- und Wissenschaftgeschichte bisher die Zentralperspektive als der wichtigste Schnittpunkt von künstlerischer Praxis und Wissenschaft, so möchten wir für das 17. Jahrhundert das Licht als das gemeinsame Paradigma von Kunst und Naturphilosophie geltend machen." (7) The editors' point of reference is Wolfgang Schöne's Über das Licht in der Malerei (1954), and they are correct in noting that nothing as substantial as this book appeared in the next 50 years. More recently though, the study of light in painting, sculpture and architecture has moved again to the foreground of investigations. To mention only one, Frank Fehrenbach's study in Art History (2005) of Bernini's light, protesting against its reduction to a metaphor for the divine, stands out. Lichtgefüge des 17. Jahrhunderts is an important player in this emerging field.

As the subtitle of the book indicates, its focus is on Rembrandt and Vermeer, two artists in the seventeenth-century Dutch Republic, not coincidentally known for their painterly handling of light. Philipp Weiss explains in his introduction to the volume that Vermeer and Rembrandt are only two instances of a more general change in seventeenth-century Bildkultur: "Das Licht oder die Leuchtkraft ist den Darstellungselementen immanent und diese bestimmen sich auch in ihrem gegenseitigen Verhältnis lichthaft. Von einem akzidentiellen Element, das etwas zeigt oder beleuchtet, wandelt sich das Licht zu einem generativen und dynamischen, vielleicht gar zu dem wichtigsten, bildkonstitutiven Element." (18) This is the central thesis of the book. Moreover, the book aims to show similar changes in the discussion of light in science and philosophy. The central concept of analysis, in this respect, is that of Lichtgefüge or the sometimes used alternative Lichtordnungen (21), perhaps best translated as orders or structures of light, which similarly pervade the areas of art, science and philosophy. Given the centrality of Vermeer and Rembrandt in art, it comes as no surprise that also in other areas the focus is on the Netherlands: Descartes, who spent an important part of his life in the Dutch Republic and was immensely influential there, and Christiaan Huygens in science; Spinoza in philosophy. However, the book also contains important excursions to France (foremost in the discussion of the work of Desargues) and the German lands, and Leibniz in particular.

Roughly, the book falls apart in three sections on science, philosophy and art. As to how these sections relate, it is important to keep in mind that the central concept is that of Lichtgefüge. In principle, the book should only be interested to reveal structures or orders common to art, science and philosophy, that is, to reveal parallels in how light is discussed in art, science and philosophy. The contributions treat the Lichtgefüge in one of the three fields of art, science and philosophy, with different degrees of reference to other areas. In fact, some of the essays feed in to the general theme of Lichtgefüge, but make no reference to other fields. This is the case, for example, in Peter Bexte's discussion of Mariotte's discovery of the eye's blind spot, Hubertus Busche's argument that Leibniz's monads are centres of light with a soul, or the contribution of Ernst van de Wetering on Rembrandt's use of light and colour. Nevertheless, other chapters testify to the fact that for some authors more is at stake than showing parallels - they attempt to show interactions between art, science and philosophy, however, only to state that the evidence of such interactions is inconclusive. Two of the very informative papers on the history of optics are good examples of this trend. Alan Shapiro interestingly defines the characteristics of a "cartesian painting", but he is doubtful about any possible influence between Netherlandish art and Descartes' optics. Fokko Jan Dijksterhuis considers "Huygens Wellentheorie als eine physico-mathematische Artikulation des 'immanenten Lichtgefüges'" (63) and "als das physiko-mathematische Gegenstück zu Rembrandts Licht" (76), but he also adds that Huygens was not interested in the meaning of light, and thus an unlikely candidate to support an interaction between art and science on the issue of light, even though he shared the same country with Rembrandt and Vermeer.

All in all, this book has more the character of an explorative collection on a theme - light in painting - than that of an exhaustively supported and cogently argued thesis. The book rightly puts this theme on the agenda from which it had virtually disappeared after Panofsky's intervention. It is successful in revealing parallels between art, science and philosophy, but fails to show any lines of influence between those fields - something wich some of the contributors do find desirable. The problem is with the concept of Lichtgefüge itself. It is hard to see how a discussion of Vermeer's painting in terms of Spinoza's philosophy (Sara Hörnak) or the establishment of "reiche Übereinstimmungen" (178) between Spinoza's philosophy and Desargues' projective geometry (Yvonne Toros) can be truly helpful in understanding painters' use of light and its possible connections to the treatment of light in other areas. Instead of 'thought structures' or 'orders' we would need to approach these issues with a focus on practices, both in art and in science. It is no coincidence that this book is strongest when it stays close to practices of chiaroscuro or contemporary reflections on them (Francesca Fiorani on Desargues and arial perspective; Carolin Bohlmann on the "bevriende kleuren" of Rembrandt scholar Van Hoogstraaten). Nevertheless, despite such historiographical shortcomings, Lichtgefüge des 17. Jahrhunderts has the merit of launching light as an important theme in art history, and deserves to be read for its rich exploration of this theme from a dazzling diversity of perspectives in history of art, science and philosophy.