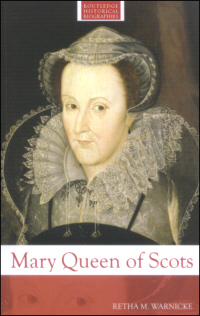 After her studies of Tudor queens and queenship, Professor Warnicke has stepped into the crowded and controversial terrain of books upon Mary, Queen of Scots. She has produced a substantial biography of the woman who became a regnant Queen from a week after her birth. This new study is presented in nine chronological chapters maintaining a fairly even coverage throughout Mary's life which in effect downplays the importance of the personal rule within Scotland 1561-67. Warnicke is self-consciously telling the story from the perspective of a cultural historian attempting to reconstruct the emotional contours of Mary's life and the parameters and restrictions placed upon it by her gender; Mary is presented sympathetically as a pioneering woman. This approach is set out in the Introduction which provides a literature review of other studies of the Scottish Queen. The narrative then commences providing a detailed account of Mary's life which can be quite dense in places and might be a barrier for some undergraduates tackling the subject. However, there are careful subdivisions of the chapters, genealogical tables and some illustrations (probably restricted by the publisher) which help those coming to the subject for the first time to navigate their way through Mary's life.

The formative period Mary spent in France is rightly emphasised and discussed at considerable length, though Rosalind Marshall's Queen Mary's Women: Female Relatives, Servants, Friends and Enemies of Mary, Queen of Scots also published in 2006 gives a student a more vivid sense of Mary's personal relationships with her French relations and friends. Warnicke draws upon her own strengths and explains much about European court protocol and the concern with the image of the monarchy. Her touch is less secure when dealing with the Scottish court and politics and Mary's relationship with her Scottish subjects. Though Warnicke does not explicitly offer this as an explanation, there is a suggestion that Mary was so immersed in those French court values that she did not understand her subjects and, like Mary of Guise, could at times be very puzzled and exasperated by their behaviour. For each of the famous incidents in Mary's personal reign, Warnicke offers long explanations which sometimes slide into special pleading. For example, the discussion about Bothwell's abduction and rape of Mary provides much important comment about the context of sexual violence against women in 16th-century Europe and how restricted the female concept of honour made the choices available to the Queen. It might also have been helpful to have set the events of 1567 alongside the parallel experiences of her father and her son, both of whom were abducted as vulnerable minors. Violently seizing a ruler was a well-rehearsed form of Scottish politics by other means and Mary was expected to play by the Scottish and not the French rules. Warnicke does allow that the choice to flee to England was a "blunder" (166), but that judgement remains buried within the paragraph. While her gender placed her in an exceptionally difficult position, as Queen of Scots Mary made a series of political choices and a number of them created immense political trouble.

The chapters detailing Mary's captivity provide a well-balanced account of her various debilitating illnesses, which probably included porphyria. It might have been helpful to have made a direct causal link between Mary's bad health and the impairment of her judgement during her final years. Here, as elsewhere, throughout the Queen's life it was clear what Mary was hoping to achieve, whether some of her ambitions were realistic, given the world of international relations she inhabited, is less clearly addressed. Mary made a good Queen, but a bad King and as a ruler she needed to succeed in both roles. Professor Warnicke has done an excellent job of explaining the constraints of queenship and why Mary did make a good Queen, though she has seemed to sidestep the issue of kingship.