Roger A. Mason / Martin S. Smith: A Dialogue on the Law of Kingship among the Scots 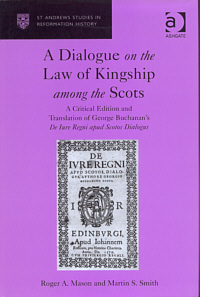 The production of this critical and parallel text edition of George Buchanan's De Iure Regni apud Scotos Dialogus is a gift for a range of scholars. Completed with great scholarly attention and tenderly brought to fruition, this magnum opus is the type of project which due to its nature is all too often left tantalizingly incomplete. Begun by the late Martin S. Smith, a classicist at the University of St Andrews who completed an annotated edition of the text, it took a further two decades for the work to be completed by fellow St Andrews scholar Roger A. Mason. That the work has come to fruition is of benefit to historians of early modern Scotland and Europe, and to those more widely interested in political theory, print history and textual criticism. The volume offers comparative analysis of editions produced in Edinburgh, Antwerp, London and Aberdeen in the sixteenth, seventeenth and eighteenth centuries, as well as a manuscript version held in the British Library believed to be older than the first printed edition. The meticulous comparisons provide a wealth of material for those concerned with the various editions and the possible social and political pressures surrounding them. As a result this work offers a critically important contribution to scholarship on the publication of political theory in early modern Europe.

Moreover, the book is important beyond its meticulous edition of De Iure Regni. Mason's introduction is a concise but rich biography of Buchanan drawing together an array of research which clears up numerous contested aspects of his life. It identifies the key places and events, but also charts the importance of significant relationships which forged Buchanan's thinking including those with Regent Morton and Mary Queen of Scots. He notes the distinct challenges faced by Buchanan as a fully fledged Francophile returning to Scotland to join Mary's court. His relations with the queen were tumultuous at best and became increasingly complicated by his long held allegiance to the Lennox Stewarts. Hence the murders of Riccio and later Darnley (a Stewart) with their links to the queen did much to shape how Buchanan came to perceive tyranny. Of equal importance is the impact that his thinking came to bear on the young James VI, to whom the work was dedicated. Far from convincing James of the accountability of monarchs, the young king would purport an absolute divine right of kings adopted by the Stuart lineage that would reach its zenith with his son, Charles I. There may be little wonder why the views of Buchanan failed to take root in his royal young student, after all, De Iure Regni defended the removal of James' mother and advocated the possibility of just regicide. The importance of this latter aspect took centre stage in 1649 with the execution of Charles I by the English Parliament. John Milton, in his defence of the regicide, utilized Buchanan's work as one of his primary sources.

Besides biographical details and an introduction to De Iure Regni, Mason compares the work with Buchanan's History of Scotland in order to offer a fuller assessment of Buchanan's ideological trajectory. He explains De Iure Regni's use, or lack there of, of Scottish historical arguments and highlights the dearth of biblical rhetoric. In the contemporary context in which Buchanan wrote the tract both of these aspects are rather surprising. Contrary to Hugh Trevor-Roper's claim that Buchanan withheld from using more Scottish examples because the ancient history of Scotland recorded by Hector Boece had been demythologized by contemporary British historians, Mason argues the lack of Scottish examples rests on two factors. First, Buchanan had already set out his historical account and argument for the indigenous right to resist tyranny in his history of Scotland. Second, a European audience was at the fore of the author's intentions from the beginning of his composition of De Iure Regni and thus he did not want to ostracize his continental audience unfamiliar with Scottish history. The absence of biblical rhetoric is less easily explained, especially in light of Mason's confirmation that Buchanan had both been ordained as a Catholic priest before leaving France and positively identified as a Protestant soon after returning to Scotland. Here Mason rests on the Humanist nature of Buchanan's work. As one of the great Latinists of his day, Buchanan preferred to use classical arguments of Greece and Rome, which he often identified as truths predating Christian scripture but that were in accordance with them. In one of the few instances where he engages with scripture in De Iure Regni he deconstructs the traditional contemporary interpretation of the Apostle Paul's epistle to the Romans. For Buchanan the supreme authority in governance is law. It dictates the limitations of a monarch's activities and establishes citizens as ultimately sovereign in terms set out by Cicero, Plato and Aristotle, although he interprets them more freely than they perhaps would have allowed.

Mason's excellent scholarship both in terms of the historiographical introduction and the textual analysis makes great strides in elucidating the work of an individual who in many ways remains enigmatic. The work affirms the generally accepted importance of Buchanan in the wider British and European contexts, but amplifies the significant radicalness of his political theory. Whereas contemporary writers argued for the right of citizens to corporately remove an unjust monarch, Buchanan went much further. He argued for the right of a lone individual to commit regicide in order to remove a tyrant. As a result, Buchanan holds a particularly important place in the formation of Republican and Libertarian principles. Although many of his ideas would later be adopted by Locke, he approached them from a fundamentally different perspective than Lockean natural rights. Thus the ascription of any direct philosophical link is not appropriate. Mason's erudite assessment of Buchanan as demonstrably more radical than either his Huguenot contemporaries or other Protestant political theorists makes De Iure Regni a key text for understanding the significance of Buchanan within the tumultuous political landscape of Britain in the sixteenth and seventeenth centuries, but more importantly establishes the significance of the work's widespread popularity in Britain and beyond. The work would appear in multiple editions over the following centuries, particularly in times of political turmoil such as the execution of Charles I and in the run up to the American Revolution. Mason firmly and eloquently establishes the importance of Buchanan in the history of political theory.