Allan I. Macinnes: Union and Empire 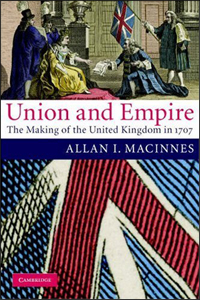 Union and Empire: the making of the United Kingdom in 1707 provides a rich and wide-ranging account of how the union between the kingdoms of England and Scotland came about in 1707. The union was a turning point in a relationship that had been marked by centuries of military conflict, by a 'personal union' via successive Stuart monarchs of England and Scotland from 1603, and the forcible union of Scotland with England during the Interregnum in the 1650s. A major strength of this work - which can be read as both a survey of the subject and as a more detailed monograph - is its sensitivity to the historical contexts to Union both in and before 1707.

The first section opens with a detailed review of the historiography on the Union, encompassing, among others, Daniel Defoe's The history of the Union of Great Britain (1709), James Macpherson's History of Great Britain (1775), and Sir Walter Scott's writings in the early-nineteenth-century, as well as twentieth-century approaches. With this firm historiographical grounding established, the book moves on to consider the seventeenth-century background in Part II. There follows a chapter exploring ideas about Anglo-Scottish Union from James VI and I's accession in 1603 to the Restoration of the Stuart monarchy in 1660. Another chapter examines projects for union in the period between 1661 and 1703. Projects for union in this period are less well known than those of the Jacobean period and the chapter gives a valuable and accessible account of them. A comparative angle is provided by a further chapter, which contrasts attempts at Anglo-Scottish union with projects for Anglo-Irish Union. This is a useful angle to explore, not only in a more abstract comparative sense, but also because of the large number of Scottish settlers in Ulster.

The third section of the book - entitled 'the primacy of political economy' - focuses on Scottish involvement in the colonies and their trading activities over the course of the seventeenth century. It provides a reassessment of the ill-fated, notorious Darien scheme which foundered on the rocks of the incompetence of the scheme's directors, William III's diplomatic priorities, and the hostility of English mercantile interests. It also intriguingly presents a case for the importance and influence of the Dutch on Scottish attitudes towards union and suggests that some Scots questioned "whether they would not be better served by becoming the eighth member of the United Provinces rather than the junior partner in the United Kingdom" (202).

The final two sections of Union and Empire focus on the making of Union in the context of the 1690s and early 1700s. The fourth section looks at the impact of Jacobitism and 'the War of the British Succession' in debates about Union and provides a close analysis of the years 1706-7. Union and Empire questions whether Scottish politicians made the most of profound English anxieties about a politically unincorporated Scotland when negotiating a generous Union settlement, and argues that both the Scottish economy and Scottish political representation were poorly served by them. The fifth section examines the articles of the Treaty of Union, in terms of the constitutional and economic arrangements, and the provisions for retaining key components of the Scottish state.

Macinnes concludes by highlighting the different responses to Union on either side of the border. England saw celebratory bonfires, thanksgiving services, and bellringing; in Scotland the event was hardly noted at all. Union, according to Macinness, "primarily served the interests of England, notwithstanding the hopes and ambitions of its Scottish backers" (314). The Union came about because the English government were keen to contain a "rogue state" (325) and had the military and fiscal means to bring this about. Nevertheless, Maclinnes indicates how, despite a problematic start, Union flourished by the mid-eighteenth-century with the demise of the Jacobitism, particularly because of the colonial opportunities that it brought to the landed elites and to mercantile and professional groups. So much so that Macinnes argues that "the fortunes of the Union have been umbilically linked to the Empire". With the decline of the British empire in the twentieth century and the growth of European Union, Anglo-Scottish Union "has moved from a constitutional fixture to a constitutional option" (326).

Union and Empire covers much historical ground, both chronologically and in terms of subject areas. It is at once a history of trade, political thought, Anglo-Scottish high politics, and British colonial settlement and enterprise. In the introduction, Macinnes helpfully details the major archives that provide the bedrock of his fascinating range of primary sources. It is thus somewhat frustrating that the author provides few direct quotations from these sources within the book's narrative. Undoubtedly doing so would make Union and Empire a much longer book but it would also provide an immediacy for the reader.

A particular example of this is how diplomatic letters from the British court held in the Rigsarkivet, Copenhagen are handled. Macinnes highlights the utility of the correspondence of Iver Rosenkrantz, the envoy extraordinary in England between 1702 and 1705, for an historian of the Union, owing to Rosenkrantz's close associations with Prince George of Denmark, the husband of Queen Anne. Rosenkrantz's testimony is described as "candid and absorbing but also revelatory" (10) in what it sheds on the court's attitudes to Union. However, although these archives are drawn upon throughout the book, Rosenkrantz's correspondence is never analysed in the depth that the reader has been lead to expect from its prominent flagging in the introduction. And while it highlights Anne's concerns about her royal prerogative, as Macinnes stresses at several points, we learn little of how she expressed her concerns and to whom (were they the private ventings of anger and fear from a sovereign uneasy in her role as a parliamentary monarch, were they publicised before the wider circle of the court?) This is a shame, not only for historians of the Anglo-Scottish Union, but also for those studying British politics more generally in this period. Likewise, the point about Rosenkrantz's closeness to Anne's consort is never fully pursued. While Macinnes appears to endorse the view that George was "an understated but demonstrable player in the making of Union" and, again, goes on to describe the insights provided by the Rigsarkivet letter books as "stunning and novel" (49), the reader is left with little sense of exactly how George performed his role in this respect.

There are also a couple of slips with names. The author of Historia Anglo-Scotica was not John Drake (127, 372) but the pamphleteer and physician, James Drake, while the paymaster general of the forces was not "John Brydges (later 1st Duke of Chandon)" (234) but James Brydges, later 1st duke of Chandos.

Overall, Union and Empire is a thought-provoking book, whose rich archival grounding will additionally serve as pointers to future scholars of late seventeenth- and early eighteenth-century Scotland. Its consideration of the interplay between commerce, high politics, political ideology, and colonisation in the formation of Union, moreover, offers an interpretative model to historians investigating state formation and union in other European regions.